You are here: Home › physics › Lord Kelvin and the Analysis of Thermodynamics 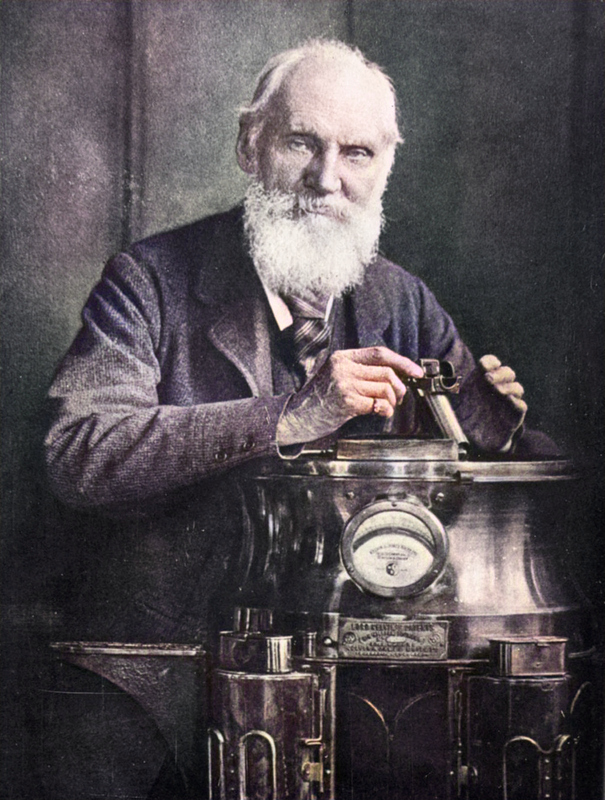 On December 17, 1907, Irish physicist William Thomson, 1st Baron Kelvin of Largs, passed away. Thomson did important work in the mathematical analysis of electricity and formulation of the first and second laws of thermodynamics. Absolute temperatures are stated in units of kelvin in his honour. He was ennobled in 1892 in recognition of his achievements in thermodynamics.

William Thomson was born in Belfast, Ireland, to James Thomson, a teacher of mathematics and engineering at Royal Belfast Academical Institution and Margaret Gardner among six siblings. Unfortunately, Margaret Thomson already died in 1830 when William was six years old. First tutored by his father and his older siblings, William attended the Royal Belfast Academical Institution, where his father was a professor in the university department, before beginning study at Glasgow University in 1834 at the early age of 10. Since the University of Glasgow, where his father was appointed professor of mathematics, provided many of the facilities of an elementary school for able pupils, and this was a typical starting age.

Thomson became intrigued with Fourier’s Théorie analytique de la chaleur (The Analytical Theory of Heat) and committed himself to study the “Continental” mathematics resisted by a British establishment still working in the shadow of Sir Isaac Newton. In 1841, he wrote a paper On the uniform motion of heat in homogeneous solid bodies, and its connection with the mathematical theory of electricity, where he made remarkable connections between the mathematical theories of heat conduction and electrostatics, an analogy that James Clerk Maxwell was ultimately to describe as one of the most valuable science-forming ideas [2].

Thomson went to Cambridge and in 1845 he graduated with a BA and he was Second Wrangler (ranked second in the list of those obtaining a First Class degree). Further examinations saw him become first Smith’s prizeman and he was elected a fellow of Peterhouse at age 21. Thomson went to Paris and worked in the physical laboratory of Henri-Victor Regnault. There, he was inspired to begin trying to bring together the ideas of Michael Faraday, Charles Augustin de Coulomb and Siméon Denis Poisson on electrical theory [3,4,5]. Ideas of ‘action at a distance’ or properties of the ‘ether‘, and ideas of an ‘electrical fluid’ were difficult to unify. There were problems of whether or not an ‘electrical fluid’ was an actual physical entity with the properties of a fluid.[1]

In 1846, he was appointed to the chair of natural philosophy in the University of Glasgow. In 1847-49 he collaborated with Sir George Stokes on hydrodynamical studies, which Thomson applied to electrical and atomic theory [6]. The thermodynamical studies of Thomson led him to propose an absolute scale of temperature in 1848. The absolute scale that he proposed was based on his studies of the theory of heat, in particular the theory proposed by Sadi Carnot and later developed by Clapeyron [7]. The Kelvin absolute temperature scale, as it is now known, was precisely defined much later after conservation of energy had become better understood. It derives its name from the title, Baron Kelvin of Largs, that Thomson received from the British government in 1892. The Kelvin is the river which runs through the grounds of Glasgow University and Largs is the town on the Scottish coast where Thomson built his house. [1].

The Dynamical Theory of Heat

In 1847, at a meeting of the British Association for the Advancement of Science, Thomson first heard Joule’s theory about the interconvertibility of heat and motion, which went counter to the accepted knowledge of the time. It was generally believed that heat was an imponderable substance (caloric) and could not be, as Joule claimed, a form of motion.[10] Thomson was open-minded enough to discuss with Joule the implications of the new theory. By 1851 Thomson was able to give public recognition to Joule’s theory, along with a cautious endorsement in a major mathematical treatise, “On the Dynamical Theory of Heat.” Thomson’s essay contained his version of the second law of thermodynamics, which was a major step toward the unification of scientific theories.[9]

One of the clearest instances of his proposed conversion of heat (or caloric) into mechanical effect is in Thomson’s estimate of the age of the Earth. Given his youthful work on the Earth and his interest in heat conduction, it is no surprise that he chose to investigate the Earth’s cooling and to make historical inferences of the Earth’s age from his calculations. Lord Kelvin was a creationist in a broad sense, but he was not a ‘flood geologist.’ He contended that the laws of thermodynamics operated from the birth of the universe and envisaged a dynamic process that saw the organization and evolution of the solar system and other structures, followed by a gradual heat death.[8]

Thomson’s contributions to 19th-century science were many. He advanced the ideas of Michael Faraday, Fourier, Joule, and others. Using mathematical analysis, Lord Kelvin drew generalizations from experimental results. He formulated the concept that was to be generalized into the dynamic theory of energy. In 1854, George Gabriel Stokes wrote to Thomson to try to re-interest him in work by asking his opinion on some experiments of Michael Faraday on the proposed transatlantic telegraph cable. Faraday had demonstrated how the construction of a cable would limit the rate at which messages could be sent – in modern terms, the bandwidth. Thomson jumped at the problem and published his response that month expressing his results in terms of the data rate that could be achieved and the economic consequences in terms of the potential revenue of the transatlantic undertaking. This prompted a rebuttal by E.O.W. Whitehouse, the Atlantic Telegraph Company’s chief electrician, who claimed that practical experience refuted Thomson’s theoretical findings. Despite their disagreement, Thomson participated, as chief consultant, in the hazardous early cable-laying expeditions. In 1858 Thomson patented his telegraph receiver, called a mirror galvanometer, for use on the Atlantic cable. Eventually the directors of the Atlantic Telegraph Company fired Whitehouse, adopted Thomson’s suggestions for the design of the cable, and decided in favour of the mirror galvanometer. Thomson was knighted in 1866 by Queen Victoria for his work.

Thomson was elected a fellow of the Royal Society in 1851, received its Royal Medal in 1856, received its Copley Medal in 1883, and served as its president from 1890 to 1895. He published more than 600 papers and was granted dozens of patents. Thomson resigned his university chair at Glasgow in 1899, at the age of 75, after 53 years of a fruitful and happy association with the institution. He was making room, he said, for younger men.[9] As a professor, he had introduced laboratory courses on a par with theoretical lectures and awarded prizes to talented students.

In November 1907 Wiliam Thomson caught a chill and his condition deteriorated until he died at his Scottish country seat, Netherhall, in Largs on 17 December at age 83.