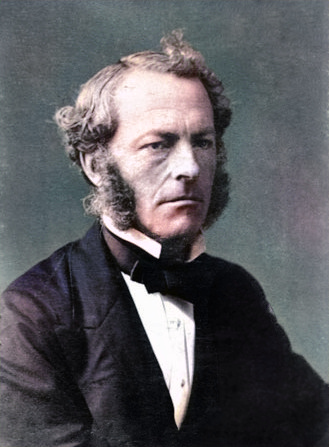 On February 1, 1903, Irish mathematician, physicist, politician and theologian Sir George Gabriel Stokes, 1st Baronet, passed away. Stokes made seminal contributions to fluid dynamics, optics, and mathematical physics including the first version of what is now known as Stokes’ theorem.

“It is very difficult for us, placed as we have been from earliest childhood in a condition of training, to say what would have been our feelings had such training never taken place.”
— George Gabriel Stokes (1893). Natural theology: The Gifford lectures

George Stokes was the youngest son of eight children of the Reverend Gabriel Stokes, rector of Skreen, County Sligo, Ireland, and Elizabeth Haughton. according to one of his obituary writers and colleagues John William Strutt Rayleigh (Lord Rayleigh), Stokes had been a tempestuous and sometimes violent child.[2] After attending schools in Skreen and Dublin, in 1835, at the age of 16 and after his father‘s death, George Stokes moved to England and entered Bristol College in Bristol. In 1837, he entered Pembroke College in Cambridge, where he graduated after four years as Senior Wrangler (the top First Class degree) in the Mathematical Tripos with tutor William Hopkins and he was the first Smith’s prizeman. Pembroke College immediately gave him a Fellowship.[1]

Stokes‘ first published papers, which appeared in 1842 and 1843, were on the steady motion of incompressible fluids and some cases of fluid motion. These were followed in 1845 by one on the friction of fluids in motion and the equilibrium and motion of elastic solids, and in 1850 by another on the effects of the internal friction of fluids on the motion of pendulums. To the theory of sound he made several contributions, including a discussion of the effect of wind on the intensity of sound and an explanation of how the intensity is influenced by the nature of the gas in which the sound is produced. These inquiries together put the science of fluid dynamics on a new footing, and provided a key not only to the explanation of many natural phenomena, such as the suspension of clouds in air, and the subsidence of ripples and waves in water, but also to the solution of practical problems, such as the flow of water in rivers and channels, and the skin resistance of ships. His work on fluid motion and viscosity led to his calculating the terminal velocity for a sphere falling in a viscous medium. This became known as Stokes’ law.

Theories on Fluids in Motion

After he had deduced the correct equations of motion Stokes discovered that again he was not the first to obtain the equations since Navier, Poisson and Saint-Venant had already considered the problem. In fact this duplication of results was not entirely an accident, but was rather brought about by the lack of knowledge of the work of continental mathematicians at Cambridge at that time. Again Stokes decided that his results were obtained with sufficiently different assumptions to justify publication and he published On the theories of the internal friction of fluids in motion in 1845.[1]

In 1849, Stokes was appointed to the Lucasian professorship of mathematics at Cambridge, a position he held until his death in 1903. Also in 1849 he wrote two papers on variable gravitation on the Earths surface which is said to have reformed the science of geodesy. While it was known that the force of gravity differed depending on where a person was on Earth Stokes claimed that this was not dependent upon the interior composition of the Earth which had been assumed to be the case up until then. In 1851 he was elected to the Royal Society, awarded the Rumford medal of that Society in 1852, and he was appointed secretary of the Society in 1854. The Lucasian chair paid very poorly so Stokes needed to earn additional money and he did this by accepting an additional position to the Lucasian chair, namely that of Professor of Physics at the Government School of Mines in London.

Stokes wrote various papers commenting on criticising and developing ideas first proposed by French mathematicians such as Lagrange, Laplace, Fourier, Poisson and Cauchy. [4,5,6,7] His interest led him to advocate changes to Cambridges Tripos exam system to include more continental mathematics. This focus led some colleagues to label him a mathematician of the French tradition. However it is generally acknowledged the papers Stokes wrote on mathematical topics were deeply related to his physical experiments.[2] In 1854 Stokes theorised an explanation of the Fraunhofer lines in the solar spectrum. He suggested these were caused by atoms in the outer layers of the Sun absorbing certain wavelengths. However when Kirchhoff [8] later published this explanation, Stokes disclaimed any prior discovery. Stokes’ career certainly took a rather different track in 1857 when he moved from his highly active theoretical research period into one where he became more involved with administration and experimental work.

As part of his experimental drive Stokes helped to set up the Cavendish laboratory in the mid 1880s. Stokes received the Copley medal from the Royal Society in 1893 and he was given the highest possible honor by his College when he was elected as Master of Pembroke College in 1902 at age 83. He did not hold this position for long, for he died at Cambridge the following year.

Isabelle Gallagher, An introduction to the mathematical study of the Navier-Stokes equations (1/3), [11]