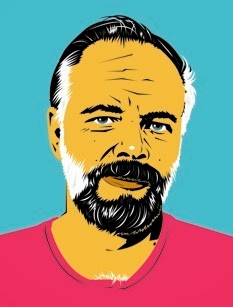 On December 16, 1928, American novelist Philip K. Dick was born. He explored sociological, political and metaphysical themes in novels dominated by monopolistic corporations, authoritarian governments, and altered states. Blade Runner, Total Recall, A Scanner Darkly, Minority Report, Paycheck…does that ring a bell? Although maybe you don’t know Philip K. Dick, for sure you have seen one of the movies based on his short stories or novels. Philip K. Dick has influenced our world today more than you might think.

“In one of the most brilliant papers in the English language Hume made it clear that what we speak of as ‘causality’ is nothing more than the phenomenon of repetition. When we mix sulphur with saltpeter and charcoal we always get gunpowder. This is true of every event subsumed by a causal law — in other words, everything which can be called scientific knowledge. “It is custom which rules,” Hume said, and in that one sentence undermined both science and philosophy.”
— Philip K. Dick, “The Day the Gods Stopped Laughing,” unpublished article written in the late 60’s

Philip Kindred Dick and his twin sister, Jane Charlotte Dick, were born on December 16, 1928, in Chicago, Illinois, to Dorothy Kindred Dick and Joseph Edgar Dick, who worked for the United States Department of Agriculture. When the family moved to the San Francisco Bay Area, the parents got divorced and both fought for custody of Philip, which was awarded to his mother. Together with her son, Philip’s mother moved to Washington, D.C., where already in elementary school his teachers remarked that he showed “interest and ability in story telling.” In 1938, they returned to California, and about this time Philip raised an interest in science fiction literature.

In a certain sense, the world is not entirely real

Philip briefly attended the University of California, Berkeley, and took classes in History, Psychology, Philosophy, and Zoology. Through his studies in Philosophy, he believed that existence is based on the internal-based perception of a human, which does not necessarily correspond to external reality. After reading the works of Plato and pondering the possibilities of metaphysical realms, Dick came to the conclusion that, in a certain sense, the world is not entirely real and there is no way to confirm whether it is truly there.

The Dream of Mainstream Success

Dick published his first story in 1951 and began to write as a full-time author. During 1952 his first speculative fiction publications appeared in Planet Stories, and in The Magazine of Fantasy and Science Fiction that fall. The 1950s were a difficult and impoverished time for Dick. He published almost exclusively within the science fiction genre, but dreamed of a career in the mainstream of American literature. In 1960 he wrote that he was willing to “take twenty to thirty years to succeed as a literary writer.” But his dream of mainstream success formally died in January 1963 when the Scott Meredith Literary Agency returned all of his unsold mainstream novels. 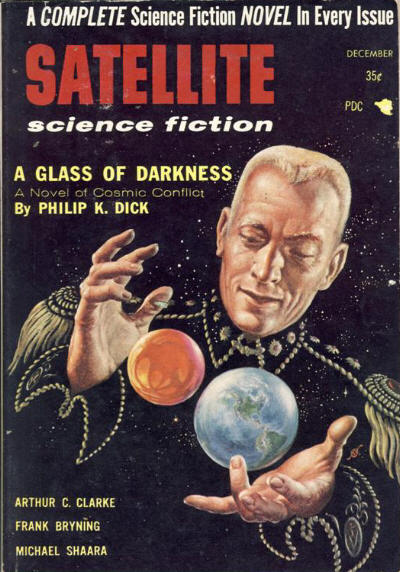 Dick’s novel The Cosmic Puppets originally appeared in the December 1956 issue of Satellite Science Fiction as “A Glass of Darkness”.

In 1963, Dick won the Hugo Award, the highest award in the science fiction world, for The Man in the High Castle, a story set into an alternative reality. The book tells the story about daily life under totalitarian Fascist imperialism in 1962, fifteen years after the end of a longer Second World War (1939–1947 in this version). The victorious Axis Powers — Imperial Japan, Fascist Italy, and Nazi Germany — are conducting intrigues against each other in North America, specifically in the former U.S. Although Dick was hailed as a genius in the science fiction world, the mainstream literary world was unappreciative, and he could publish books only through low-paying science fiction publishers. Dick’s emotional state went through many changes throughout his life. The death of his twin sister 41 days after their birth is the first of many scars Dick would face. He would be involved in a string of bad marriages and also was addicted to drugs.

The Fragile Nature of What is Real

Dick’s stories typically focus on the fragile nature of what is “real” and the construction of personal identity. His stories often become surreal fantasies as the main characters slowly discover that their everyday world is actually an illusion constructed by powerful external entities, vast political conspiracies, or simply from the vicissitudes of an unreliable narrator. Dick identified one major theme of his work as the question, “What constitutes the authentic human being?” In works such as Do Androids Dream of Electric Sheep? – the novel on which Blade Runner directed by Ridley Scott and starring Harrison Ford is based on – beings can appear totally human in every respect while lacking soul or compassion. His 1956 short story “The Minority Report” about a police commander who uses clairvoyants to arrest people before they actually commit a crime, also later put in a major Hollywood movie directed by Steven Spielberg, deals with the question If we can see into the future, does that mean the future is already set?

The last novel Dick wrote was The Transmigration of Timothy Archer. It was published shortly after his death in 1982. Today, the themes and topics raised in Dick’s stories are everywhere. His anxious surrealism defines contemporary Hollywood science fiction. His influence is pervasive, as e.g. in The Matrix and its sequels, which present the world we know as nothing more than an information grid inside a gigantic computer. Actually, Dick already articulated this concept in a 1977 speech in which he posted the existence of multiple realities overlapping the “matrix world” that most of us experience.