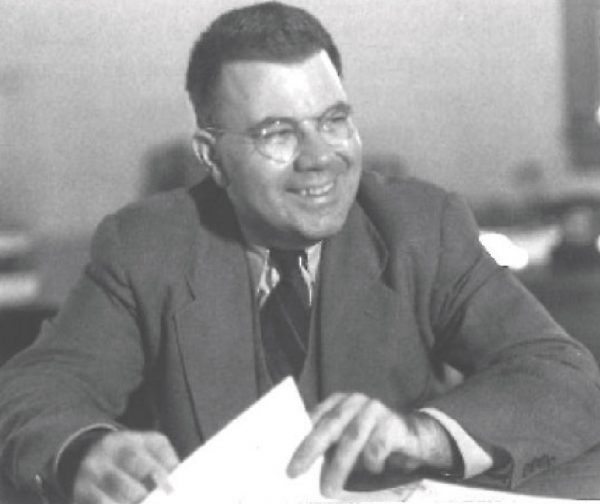 On March 2, 1902, American nuclear physicist Edward Uhler Condon was born. Condon was a pioneer in quantum mechanics and a participant in the development of radar and nuclear weapons during World War II as part of the Manhattan Project. The Franck–Condon principle and the Slater–Condon rules are co-named after him.

“I have lost a good deal of sleep trying to figure out how you could have talked this way about a man whom you have known for so long, and of whom you know so well what a good physicist and good citizen he is.”
— Edward Condon, June 1949

Edward Uhler Condon was born in Alamogordo, New Mexico, to William Edward Condon and Carolyn Uhler. His father was supervising the construction of a narrow-gauge railroad. After graduating from high school in Oakland, California in 1918, he worked as a journalist for three years at the Oakland Inquirer and other papers. He initially attended the College of Chemistry at the University of California and later switched his major to physics. Condon earned his bachelor’s degree after three years and after another two years, the physicist earned his doctorate. Edward Condon received a National Research Council fellowship and was able to go to Germany in order to work with Max Born [4] and Arnold Sommerfeld.[5] While Condon’s Ph.D. thesis combined work by Raymond Thayer Birge on measuring and analyzing band spectral intensities and a suggestion by James Franck, he rewrote his thesis under Sommerfeld using quantum mechanics, creating the Franck–Condon principle.

In the following years, Edward Condon worked in public relations at Bell Telephone Laboratories and briefly taught at Columbia University. He was associate professor of physics at Princeton University and at the University of Minnesota. In cooperation with Philip M. Morse, he wrote Quantum Mechanics, the first English-language text on the subject in 1929. During the 1930s, Condon was associate director of research at the Westinghouse Electric Company in Pittsburgh and he established programs researching on nuclear physics, solid-state physics, and mass spectroscopy. He led the company’s research on microwave radar development and further worked on the equipment used to isolate uranium for use in atomic bombs. Condon served as a consultant to the National Defense Research Committee during World War II and helped organize MIT’s Radiation Laboratory.

Edward Condon joined the Manhattan Project in 1943, but resigned after only six weeks. It is believed that Condon resigned after conflicts about security with General Leslie R. Groves, the project’s military leader. Groves had objected when Condon’s superior J. Robert Oppenheimer held a discussion with the director of the project’s Metallurgical Lab at the University of Chicago.[6] From August 1943 to February 1945, Condon worked as a part-time consultant at Berkeley on the separation of U-235 and U-238.

In 1944, Condon was elected to the National Academy of Sciences and one year later he had an influential role in organizing scientists to lobby for civilian control of atomic energy rather than military control under strict security. Further, Condon became science adviser to Senator Brien McMahon, chairman of the Senate Special Committee on Atomic Energy, which wrote the McMahon-Douglas Act, enacted in August 1946, that created the Atomic Energy Commission, placing atomic energy under civilian control. Condon also joined the American-Soviet Science Society.

The National Bureau of Standards

Edward Condon was nominated director of the National Bureau of Standards (now known as NIST) in 1945 by President Harry S. Truman. He served the position until 1951. Already in 1946, FBI Director J. Edgar Hoover described Condon as “nothing more or less than an espionage agent in disguise“, however, Truman ignored these charges. During the next years, Condon’s security status was often questioned and reviewed and Congressman J. Parnell Thomas, head of the House Un-American Activities Committee accused Condon of disloyalty. In 1948, the Department of Commerce cleared Condon of disloyalty charges. Among those who defended Edward Condon were Albert Einstein, Harold Urey and the entire physics department of Harvard. In July of the same year, the Atomic Energy Commission granted Condon a security clearance, allowing him to access classified information at NIST. In September, President Truman denounced Thomas as well as HUAC and called the organization’s activities “the most un-American thing we have to contend with today. It is the climate of a totalitarian country“. In the following years, Condon’s security clearance was again reviewed several times.

From 1966 to 1968, Condon directed Boulder’s UFO Project, known as the Condon Committee. He was chosen for his eminence and his lack of any stated position on UFOs. He later wrote that he agreed to head the project “on the basis of appeals to duty to do a needed public service” on the part of the U.S. Air Force Office of Scientific Research. Its final report concluded that unidentified flying objects had prosaic explanations. It has been cited as a key factor in the generally low levels of interest in UFOs among mainstream scientists and academics.[7]

In later years, Edward Condon was professor of physics at Washington University in St. Louis and then at the University of Colorado Boulder. There, he was also fellow of the Joint Institute for Laboratory Astrophysics. Condon was also president of the American Institute of Physics and president of the Society for Social Responsibility in Science. He was further co-chairman of the National Committee for a Sane Nuclear Policy.