You are here: Home › philosophy › Wilhelm von Humboldt and the Reform of Prussia’s Education System 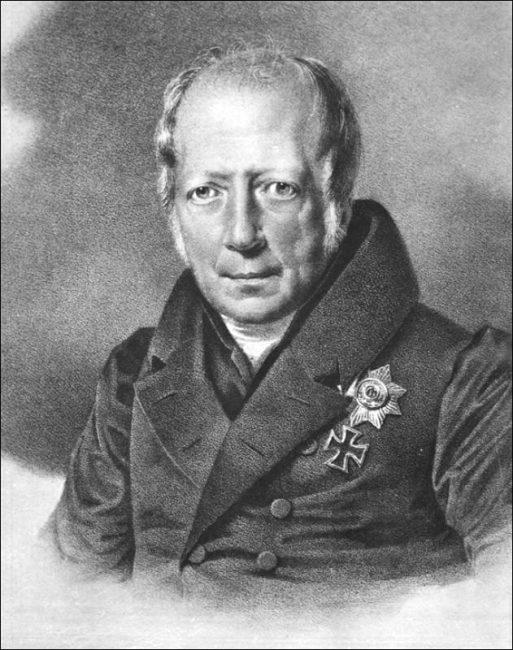 On June 22, 1767, Friedrich Wilhelm Christian Karl Ferdinand von Humboldt was born. He was a Prussian philosopher, government functionary, diplomat, and founder of the University of Berlin. He is especially remembered as a linguist who made important contributions to the philosophy of language and to the theory and practice of education. In particular, he is widely recognized as having been the architect of the Prussian education system which was used as a model for education systems in countries such as the United States and Japan.

“There are undeniably certain kinds of knowledge that must be of a general nature and, more importantly, a certain cultivation of the mind and character that nobody can afford to be without”
— Wilhelm von Humboldt

Humboldt’s father, Alexander Georg von Humboldt (1720-1779) was ordered by Frederick the Great Chamberlain to leave his military service with the wife of the heir to the throne until this marriage failed in 1769. Already in 1766 Alexander Georg had married the wealthy widow of Huguenot origin Elisabeth von Holwede, née Colomb, and through her came into possession of Tegel Castle. No savings were made on the training of the sons Wilhelm and Alexander at the Tegeler Gut – in winter in the Berlin city apartment, as the castle was difficult to heat. Wilhelm von Humboldt along with his brother Alexander experienced a decent education by prominent teachers who were among the leading minds of the Berlin Enlightenment. The parents hired renowned personalities such as Joachim Heinrich Campe and Johann Jacob Engel as house teachers, and from 1777, for more than ten years, Johann Christian Kunth, who coordinated the educational plan and supervised the teaching of the various subject teachers. Already at the age of 13 Wilhelm is said to have spoken Greek, Latin and French and to have been familiar with important authors of the respective literature. In preparation for their university studies, the brothers took part in private lectures on, for example, economics and statistics, natural law and philosophy at Kunth’s mediation.

Further Studies in Frankfurt and Göttingen

The aim of the demanding education of her sons was for the mother to qualify them for influential state offices. Wilhelm was intended to study law, Alexander for economics, which operated under the name Kameralia. Still under Kunth’s care, the brothers began their respective studies at the Brandenburg University in Frankfurt, which Wilhelm left after one semester to enroll at the Georg August University in Göttingen in the spring of 1788. In Göttingen Humboldt broke away from the given paths and from then on followed his own impulses, interests and insights. During his studies he devoted himself less to jurisprudence and more to philosophy, history and ancient languages. From his place of study, Göttingen, Humboldt made a journey via Kassel, Marburg and Giessen to the Rhine/Main region towards the end of 1788, during which he spent a few days in Mainz with the circumnavigator Georg Forster and others.[6]

“To the yoke of necessity every one willingly bows the head. Still, wherever an actually complicated aspect of things presents itself, it is more difficult to discover exactly what is necessary; but by the very acknowledgment of the principle, the problem invariably becomes simpler and the solution easier.”
– Wilhelm von Humboldt, The Limits of State Action (1792)

Wilhelm began showing interests in experimental physics, and the history of nature. In August 1789 he visited with Campe the revolutionary Paris, the Rhineland and Switzerland. Already during his studies, Humboldt made several trips around Germany, getting to know Friedrich Schiller [4] and Johann Wolfgang von Goethe [5] in Weimar. At the beginning of 1790, after completing his four semesters of study, he joined the civil service and was employed in the Department of Justice, where he was trained for the career of a judge, but at the same time acquired the additional qualification for the diplomatic service.  However, he left the service already in May 1791 on his own decision. The occupation with antiquity served him for the purpose of “the philosophical knowledge of man in general”. He understood the Greek spirit “as the ideal of the same thing that we ourselves want to be and produce.

After his mother passed away, Wilhelm von Humboldt moved to Paris for a few years. He maintained contacts with leading French politicians and intellectuals, among them Madame de Staël.[7] His discovery and study of the Basque language marked his breakthrough to his own linguistic conception and science, in which he found a life task. From 1803 until the end of 1808 he was Prussian Minister-President in Rome at the Holy See; during this time he was engaged not only in Basque but also in American Indian languages and translations from Greek. His residence in the Villa Gregoriana was the meeting point of the artists’ and scholars’ colony, among the foreign visitors were Madame de Staël, August Wilhelm Schlegel and Coleridge. [8,9]

“Freedom is but the possibility of a various and indefinite activity; while government, or the exercise of dominion, is a single, but yet real activity. The ardent desire for freedom, therefore, is at first only too frequently suggested by the deep-felt consciousness of its absence.”
– WIlhelm von Humboldt, The Limits of State Action (1792)

After the collapse of Prussia against Napoleon he returned to Germany and took over the Section for Culture and Education in the Prussian Ministry of the Interior. He was then occupied with reforming the educational system in Germany to help improving the country’s resources in any way. Even though Humboldt did not ask for this position, he began changing Prussia’s education system dramatically and with lots of enthusiasm. He soon developed completely new teaching methods, new plans for schools and important topics to be studied. He adjusted his systems to the various school types and developed significant ideas on didactics. Critiques often noted how Humboldt was not the right person for this position, since he never experienced public schools by himself, but their doubts were later proved unfounded. Humboldt proposed his idea to establish a three step schooling system with a primary school, a grammar school and the university. He introduced the final exams for teachers, a uniform obligation of the school leaving exams all implemented in between 1810 and 1834.

However, to Wilhelm von Humboldt‘s most significant contributions belongs the founding of the University of Berlin in 1810. From Humboldt’s point of view, the location of Berlin was supported, among other things, by the existence of other institutions such as the Academy of Sciences, the Academy of the Arts, the existence of a complete medical faculty as well as important collections and the Academy of the Arts – in conjunction with the new university, the best prerequisites for a multifaceted scientific education. He managed to occupy prominent professors like Friedrich Carl von Savigny, Johann Gottlieb Fichte and many more. His goal was to connect contemporary research with new teaching methods and a well balanced relationship between educators and students. Humboldt’s idea of a university provided for the unity of research and teaching in university operations and in the relationship between lecturers and their students. Both were also to be exempt from state demands and conditions of a restrictive nature. Humboldt assumed that the universities would also fulfill the purposes of the state through responsible self-regulation, from a higher point of view, so to speak, and with means that the state could not produce from its own resources.

“The interdependence of word and idea shows clearly that languages are not actually means of representing a truth already known, but rather of discovering the previously unknown. Their diversity is not one of sounds and signs, but a diversity of world perspectives [Weltansichten]. …”
– Wilhelm von Humboldt

In 1811 Humboldt was sent to Vienna as envoy and was instrumental in Austria’s accession to the coalition against Napoleon. He took part in the negotiations for the first and second Paris Peace Treaty and at the Congress of Vienna, where he successfully stood up for Jewish civil rights, but without success for a liberal constitution for the German Confederation, as Prussia’s second plenipotentiary. From 1815 to 1819 he was successively Prussian representative at the Bundestag in Frankfurt am Main, chairman of a tax reform commission and Prussian envoy in London. In 1819 he returned to Berlin as Minister for State Affairs. Because of his resistance to the Karlsbad decisions and his attempt to enforce a liberal constitution for Prussia, he was removed from all offices at the end of 1819. He moved to the family residence in Tegel, where, interrupted only by a trip to Paris and London (1828), he devoted himself to linguistic research until the end of his life. From 1820 to 1823, his studies of the Old American languages resulted in some thirty grammars and dictionaries written by himself, more or less widely executed. In a lecture on the emergence of grammatical forms and their influence on the development of ideas, he sought to show that the educational value of languages was determined by the measure of their grammatical richness. Humboldt’s particular esteem in this respect was for (Ancient) Greek, Sanskrit and the Semitic languages

Since Wilhelm von Humboldt was so active in improving the educational system, you may enjoy a lecture by Charles Leadbeater, talking about Education innovation in the slums.