You are here: Home › art › ‘Art is the Daughter of Freedom’ – Friedrich Schiller 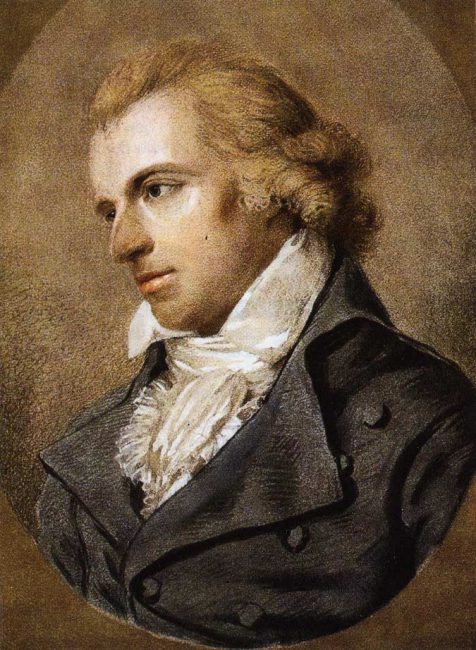 On May 9, 1805, the German poet, philosopher, and historian Friedrich Schiller passed away in Weimar, Germany. As a representative of the Weimar Classicism and the ‘Sturm und Drang’ (Storm and Drive) movement, Schiller published some of the most influential works of the time.

“He who has done his best for his own time has lived for all times.”
— Friedrich Schiller, Wallenstein (1798), Prologue – Wallensteins Lager (Wallenstein’s Camp)

Friedrich Schiller was born on 10 November 1759, in Marbach, Württemberg, as the only son of military doctor Johann Kaspar Schiller and his wife Elisabeth Dorothea. He grew up with his five sisters in Schwäbisch Gmünd, Lorch and later in Ludwigsburg. There he attended the Latin school and, after passing the Evangelical state examination four times, began to study law at the Karlsschule on January 16, 1773.. He studied Latin and Greek in his early years and wrote his first play already at the age of 13. Forced to attend the military school by the duke in 1773, Schiller moved to Stuttgart and began studying law and later medicine. During his time in Stuttgart, Schiller discovered his fascination for the ‘Sturm und Drang‘ movement and the works of Goethe, Shakespeare, Voltaire, and Rousseau.[1,2,3,4]

Early Fame with the Robbers

In 1779 he passed his first medical examinations and asked to be released from the military academy to become a military doctor. However, this was granted to him only in December 1780, after the publication of his doctoral thesis in which he attempted to establish the connection of the animal nature of man with his intellectual. In the same year Duke Karl Eugen appointed him regimental doctor in Stuttgart. Later in 1782, Schiller premiered his drama ‘The Robbers‘;[5] it was loved mainly by the young audience due to the immense criticism on governmental and economical inequities in Germany.

“Against stupidity the very gods
Themselves contend in vain.”
— Friedrich Schiller, (The Maid of Orleans) (1801)

After leaving Stuttgart without permission twice, in January 1782 for the world premiere of The Robbers in Mannheim and in May of the same year another time in Mannheim, Schiller was arrested for two weeks and banned from writing. Accompanied by his friend Andreas Streicher, Schiller fled Stuttgart and went underground in Mannheim. In December 1782 he was welcomed by the writer Henriette von Wolzogen and received a manor in Bauerbach (Thuringia). Here he took up work on Luise Millerin, which was later renamed Kabale und Liebe.

Schiller was employed as a theatre poet in Mannheim for one year. A second version of his Fiesco, a historical drama, had no success. Only with the performance of Kabale und Liebe in 1784 did the longed-for success set in. Schiller then became a member of the Electoral German Society and after his contract of employment at the Mannheim Theatre expired after one year and was not extended, Schiller got into financial difficulties. In 1785 he was accepted by his admirer and later friend Christian Gottfried Körner. Between 1785 and 1787 Schiller lived mainly in Leipzig and Dresden. Only a few works could be completed during this period, including the anthem An die Freude, which was later set to music by Beethoven, as well as the historical drama Don Carlos. In July 1787 Schiller left Dresden and moved to Weimar.

“One people will we be, — a band of brothers;
No danger, no distress shall sunder us.
We will be freemen as our fathers were,
And sooner welcome death than live as slaves.
We will rely on God’s almighty arm,
And never quail before the power of man.”
— Friedrich Schiller, Wilhelm Tell (1803)

In Weimar, Schiller met Johann Gottfried von Herder and Christoph Martin Wieland. Schiller became an associate of Wieland’s magazine Der Teutsche Merkur for this period. In the winter of 1788 Schiller visited southern Germany and met Charlotte von Lengefeld, whom he married on 22 February 1790. Schiller looked intensively at historical studies, which also resulted in the Geschichte des Abfalls der vereinigten Niederlande von der Spanischen Regierung (1788) in order to improve its financial situation. In the same year he met Johann Wolfgang von Goethe.[9] In 1789 Schiller was appointed professor of history at the University of Jena. His inaugural lecture Was heißt und zu welchen Ende studiert man Universalgeschichte? was received with great enthusiasm by the students. 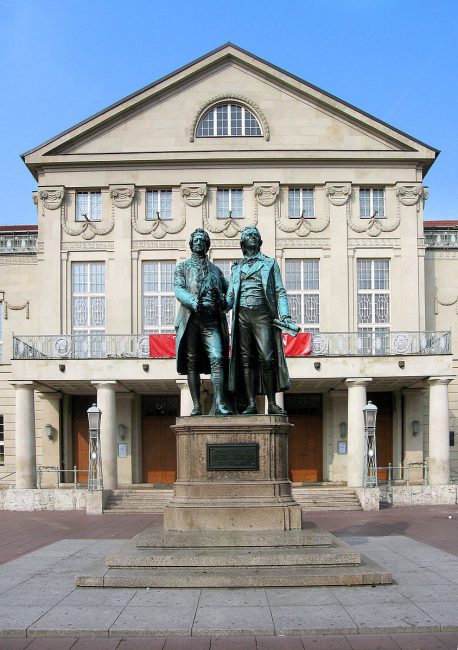 The Goethe and Schiller statue in Weimar, created by Ernst Rietschel (1804–61)

In 1790, Schiller also suffered from severe pneumonia, from which he should never really recover. During his time in Jena, Schiller mainly dealt with the works of Immanuel Kant, whose idealistic philosophy had a decisive influence on Schiller’s aesthetics in his classical period. He was also announced as honorary citizen of the Republic of France in 1792. In 1794 he met Hölderlin, Johann Gottlieb Fichte and Wilhelm von Humboldt [6], among others. Johann Wolfgang von Goethe also came closer to him, winning him as a co-worker for his magazine Die Horen. An ever-growing friendship developed between Goethe and Schiller. In 1796, the Xenien resulting from joint work between the two appeared in Schiller’s Musenalmanach. The works by Schiller and Goethe of this period were oriented towards antiquity and the Renaissance and shaped the style of Weimar Classicism.

During these years, Schiller published the play ‘Wallenstein‘ as well as many philosophical studies. In December 1799 Schiller moved with his family to Weimar. There he became a staff member of the Weimar Theatre. The plays Maria Stuart (1800), Die Jungfrau von Orleans (1801), Die Braut von Messina (1803) and Wilhelm Tell (1804) were created in rapid succession. 1802 Schiller was ennobled as Friedrich von Schiller.

Friedrich Schiller died on May 9, 1805 as a result of a serious relapse of his illness, which had broken out again a year earlier.

After Schiller’s death in 1805, Goethe expressed his deep sorrow in a letter to Carl Friedrich Zelter. The relationship had meanwhile become so close that Goethe thought he had lost half of his life, even himself, on Schiller’s death. Schiller’s works have been enthusiastically received not only in Germany, but also in many other European countries. For some, Schiller was considered a poet of freedom, for others a defender of bourgeois morality. The eloquent catchiness of his verses and his point-sure stage dialogues ensured that many of them became winged words. Schiller is considered by most Germans to be Germany’s most important classical playwright.

Friedrich Schiller on history: “The Nature and Value of Universal History”, [10]