You are here: Home › architecture › Karl Friedrich Schinkel and the Prussian City Scapes 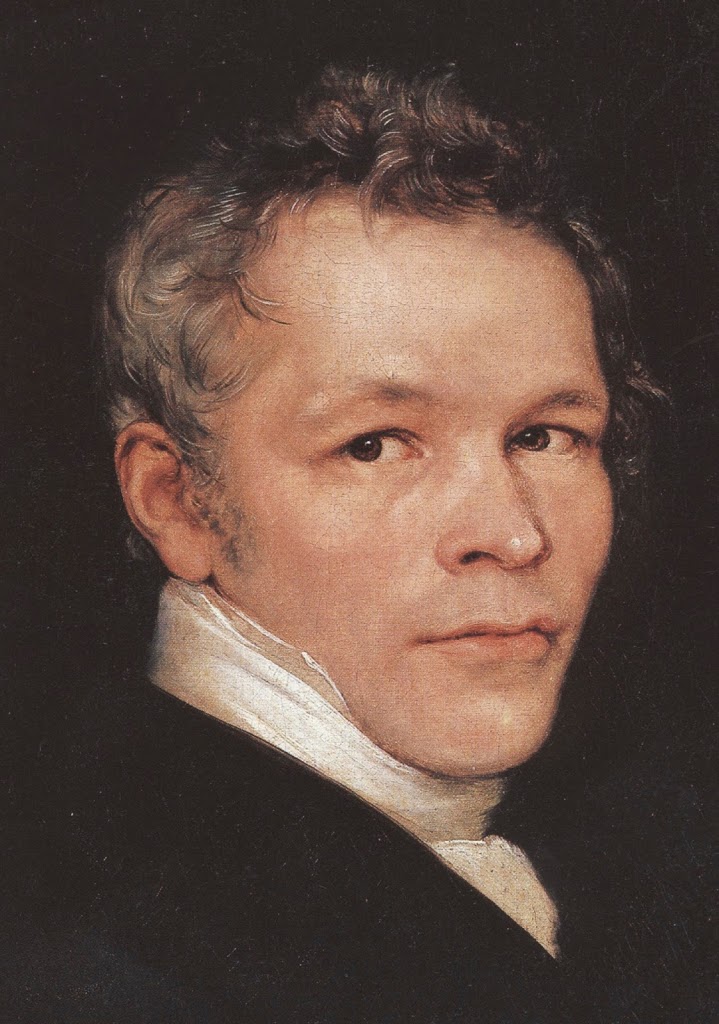 On March 13, 1781, Prussian architect, city planner, and painter Karl Friedrich Schinkel was born, who was one of the most prominent architects of Germany of the neoclassical and neogothic epoch. He shaped the city scapes of Berlin and Potsdam with his neoclassical buildings and palaces.

“Phlegm, whether physical or mental, is a sinful state for the one who lives in times of education.”
— Karl Friedrich Schinkel

Karl Friedrich was born in Neuruppin, Margraviate of Brandenburg, the son of Johann Cuno Christoph and Dorothea Schinkel, née Rose. He was the second of five children. His father worked as an archdeacon and superintendent of churches and schools in the district. Thus, Schinkel grew up in a Protestant parsonage for the first few years until he lost his father at the age of six, who had contracted fatal pneumonia during firefighting operations in a devastating fire in Neuruppin. The family then moved to the preacher’s widow’s house. In 1794 they then moved to Berlin. There, Schinkel was a student at the Berlin Gymnasium zum Grauen Kloster,  showing early interests in drawing and music.

Berlin’s most significant architect of these days was Friedrich Gilly, back then most famous for his design for the Frederick II monument from 1797. When Schinkel learned about Gilly and his work, he soon decided to become an architect himself. After finishing school, he became a student and good friend of Gilly and his also famous architect father David Gilly. From 1798 he attended their private school of architecture in Berlin, where he lived at the same time as all their other architecture students. In 1799 he also enrolled as a student at the newly founded Berlin Bauakademie.

The training was practice-oriented. It was only in winter that she planned lessons, and the students spent the summer on the construction site. In addition, Schinkel enriched his education by attending lectures at the Academy of Fine Arts. The duration of his studies is uncertain. Since his studies were highly practice-oriented, he was soon able to realize his own projects, first with the help of David Gilly and later on by himself. The ‘Pomonatempel‘ on the Pfingstberg in Potsdam, Germany depicted his first completed project.

Schinkel was during his working period highly influenced by his journeys through Europe where he produced numerous paintings, drawings, and designs, studied Europe’s architecture and engineering methods and met several influential personalities. Everywhere during his travels he also made numerous drawings and sketches of landscapes or architectural impressions. Schinkel became friends with Wilhelm von Humboldt,[5] who later helped the young architect find further projects to work on and visited Johann Wolfgang von Goethe [6] in Weimar.

After the defeat against the French in the battle of Jena and Auerstedt in 1806, it was not possible to realize major construction projects in Prussia. Schinkel had a double talent as a painter and architect. This shaped the character of his paintings, which he now created and which often focus on utopian and ideal urban landscapes. In Berlin, occupied by French troops, Schinkel showed the first panoramic pictures in 1807, including Constantinople and Jerusalem. The panorama of Palermo was particularly successful in 1808. When the royal couple Friedrich Wilhelm III and Luise, who had fled Napoleon, returned from East Prussia in December 1809, Schinkel’s new panorama pictures were shown. 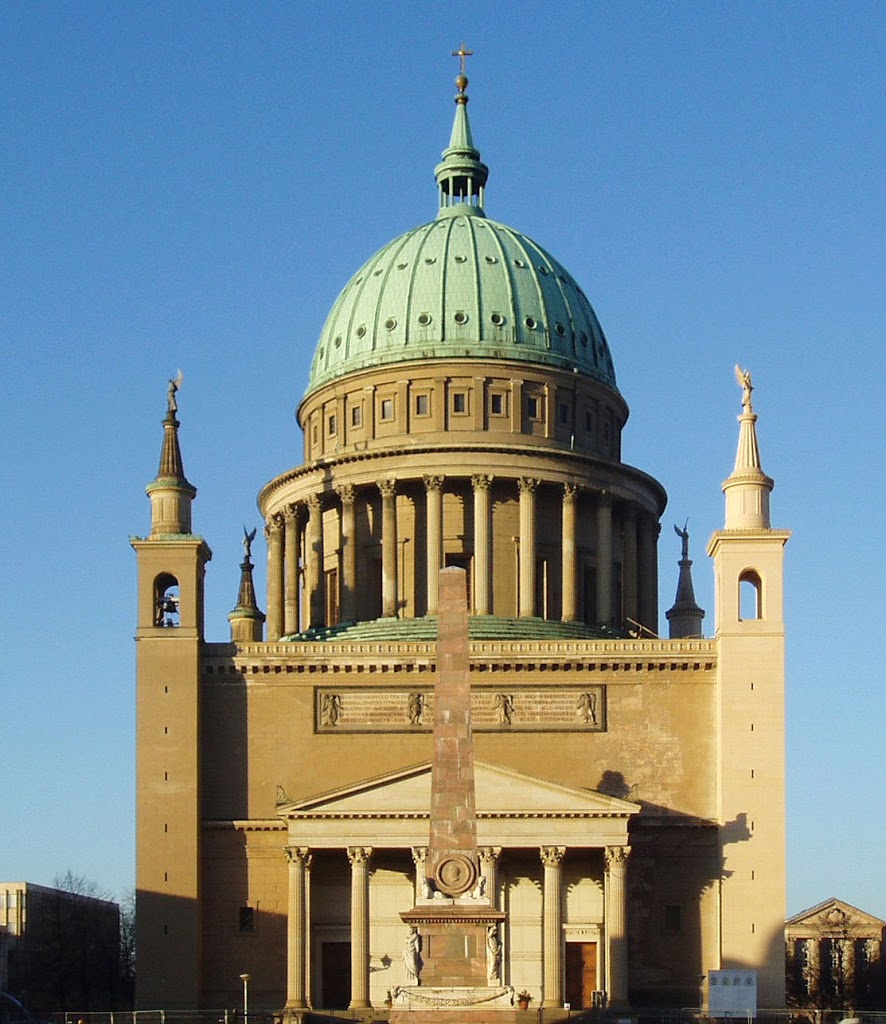 “The architecture is the continuation of Nature in its constructive activity.”
— Karl Friedrich Schinkel

Karl Friedrich Schinkel’s effect on Prussian architecture was immense. Schinkel’s classicist works are remarkably influenced by those of Friedrich Gilly and combine elements of baroque with those of the Prussian enlightenment. To his most famous classicist buildings belongs Berlin’s ‘Schauspielhaus‘, opened in 1821, ‘Altes Museum‘ on the Museum Island in Berlin, and St. Nicholas’ Church in Potsdam.

Next to his various classicist buildings, Karl Friedrich Schinkel designed also neogothic constructions, starting out with Ehrenburg Palace in Coburg around 1810. Schinkel developed a new kind of gothic architecture for himself, combining nature forms and structures with architecture elements, which he understood as antagonistic to his many classicist works. To the architect’s most innovative and most influential neogothic buildings depicts Berlin’s ‘Bauakademie‘, a back then futuristic piece of architecture and a masterpiece Schinkel’s. 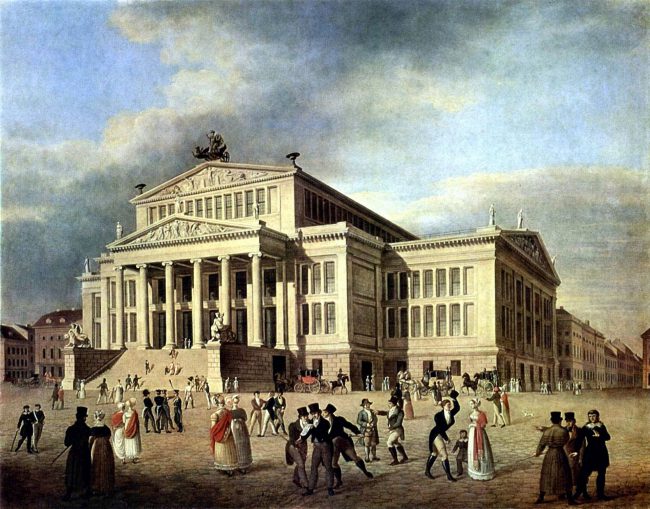 Karl Friedrich Schinkel really was an allrounder, active not only in the field of architecture, but also busy in various related creative jobs. He was occupied as stage designer, creating the stage of Mozart‘s ‘Magic Flute‘ performance in 1816 and stage designs for over 42 further plays at the National Theater in Berlin.[7] Schinkel was also a passionate painter as well as an interior designer. Actually he was first widely known as a painter before improving his reputation as an architect. His greatest assignment in this concern was given to Schinkel by Jean Paul Humbert. He created six pictures for the businessman and politician.

Among other things, he prepared several expert opinions on the Cologne Cathedral,[8] which he had met on a trip in 1816 as a ruinous torso, and which inspired him so enthusiastically that he campaigned for the rescue of the preserved and continued construction. Just how important painting was to him for his work as an architect can be seen from the fact that Schinkel wanted to design the surroundings of the Cologne Cathedral according to his own painting, which he had created three years earlier. Later he pleaded against decay and demolition of historical buildings and had monument registers drawn up.

From 1822 to 1837, Schinkel together with Christian Peter Wilhelm Beuth published the Vorbilder für Fabrikanten und Handwerker (models for manufacturers and craftsmen). This elaborate work with large-format copper engravings was an extensive collection of illustrations of shapes and patterns that were predominantly oriented to antiquity. As an aesthetic guide for trade schools and producers, it was intended to contribute to the unity of usefulness and beauty in everyday objects and to promote the beginning industrialisation of Prussia. In 1838 Schinkel was appointed head of the regional building directory (Oberlandesbaudirektor), so that he had reached the height of his master builder’s career as the architect of the king.

The last great projects he worked on were designs for wall pictures of Berlin’s ‘Altes Museum‘ which he was occupied with until Schinkel’s death in October, 1841.

Schinkel was not only the classicist star architect of the Kingdom of Prussia, he also achieved outstanding achievements in the fields of interior design, design and painting. He was influenced by the subtle classicism of his teacher Friedrich Gilly, who was related to French revolutionary architecture. Its clear stylistic idiom is in harmony with the Prussian Enlightenment, with its departure from the concave and convexly swinging, exuberant facades of the baroque. Schinkel’s significance lies not only in his architectural designs for the buildings that were actually built, but also in his theoretical work. These include, in particular, the plans for the transformation of the Acropolis of Athens into a royal palace and the construction of the Orianda Palace in Crimea.