You are here: Home › mathematics › Emmy Noether and the Love for Mathematics 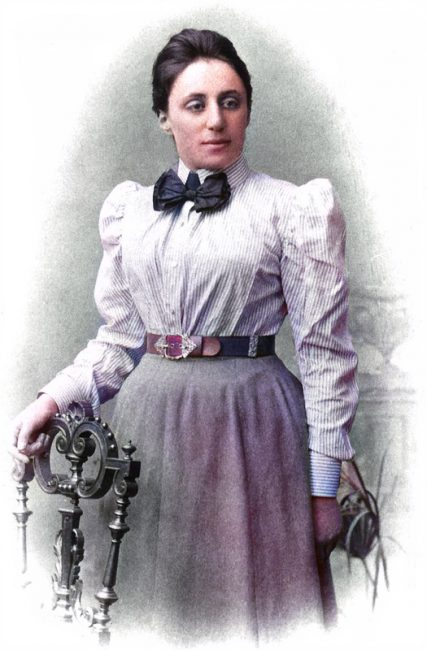 On April 23, 1882, German mathematician and physicist Emmy Noether was born, who is best known for her groundbreaking contributions to abstract algebra and theoretical physics. Albert Einstein called her the most important woman in the history of mathematics, as she revolutionized the theories of rings, fields, and algebras.

Emmy Noether came from a wealthy Jewish family. Her father Max Noether held a chair in mathematics at the University of Erlangen. Emmy did not show any particular precociousness in mathematics, but had an interest in music and dancing in her youth. She attended the Städtische Höhere Töchterschule. In April 1900 she passed the state examination to become a teacher of English and French at girls’ schools in Ansbach. In 1903 she passed the external Abitur examination at the Royal Realgymnasium – today’s Willstätter-Gymnasium – in Nuremberg. Emmy Noether decided to enroll at the University of Erlangen, but as one of two women at the institution, she was only allowed to audit her classes instead of really participating in them. Noether also finished her graduation at a grammar school in Nuremberg three years later. While restrictions were hard on studying women in Erlangen, Noether attended lectures of famous scientists like Karl Schwarzschild [5] or David Hilbert [6] in Göttingen. After returning to Erlangen, she was allowed to finally study mathematics and taught at the universities’ mathematical institute without payment after her graduation.

Teaching at the University without Payment

David Hilbert had to put great effort into getting Emmy Noether into Göttingen University as privatdozent. Eventually she was allowed to teach at the university despite her sex, but still without any payment. Since the habilitation of women at Prussian universities was prohibited by a decree, the Department of Mathematics and Natural Sciences of the Faculty of Philosophy of the University of Göttingen submitted an official application to the Prussian minister on 26 November 1915, to make an exception for Emmy Noether. However, the application was rejected and Emmy Noether then had no choice but to announce her lectures under the name of Hilbert, whose assistant she acted as.

In these years, she proved the Noether theorem one of the most important contributions to the field of mathematics since the Pythagorean theorem, as many of her male colleagues noted. It proves a relationship between symmetries in physics and conservation principles. This basic result in the theory of relativity was praised by Einstein in a letter to Hilbert when he referred to Noether’s penetrating mathematical thinking. Noether enjoyed a great reputation and delivered her habilitation lecture in 1919 but was not given any salary for her work until 1924 when Noether was appointed a special teaching position in algebra.

A great part in the development of abstract algebra was achieved in the 20th century and Emmy Noether depicted a major influence on the topic with several papers and lectures. Beginning with the year 1920, Noether began publishing works on the ideal theory, defining left and right ideals as a ring followed by another publication, analyzing ascending chain conditions. Noether published Abstrakter Aufbau der Idealtheorie in algebraischen Zahlkorpern  in 1924. In this paper she gave five conditions on a ring which allowed her to deduce that in such commutative rings every ideal is the unique product of prime ideals.[3]. After these works, Noether had many supporters in the scientific community and several mathematical terms were named after her. During the lectures she gave at university, Noether gave up regular lesson plans and rather used the time for intense discussions, bringing her research forward. Some students paid lots of respects to her methods, others were rather frustrated.

After a long friendship with the mathematician Pavel Alexandrov, Noether decided to continue her work at the Moscow State University in 1928 for some time. There she critically contributed to the development of Galois theory. Emmy Noether’s achievements are numerous. And even though she received several awards for her works she was still not promoted to being a full professor at the university, which caused much frustration along her colleagues who dearly respected her achievements and her personality.

Further recognition of her outstanding mathematical contributions came with invitations to address the International Congress of Mathematicians at Bologna in September 1928 and again at Zürich in September 1932. Her address to the 1932 Congress was entitled Hyperkomplexe Systeme in ihren Beziehungen zur kommutativen Algebra und zur Zahlentheorie. Much work on hypercomplex numbers and group representations was carried out in the nineteenth and early twentieth centuries, but remained disparate. Noether united these results and gave the first general representation theory of groups and algebras. In 1932 she also received, jointly with Emil Artin,[7] the Alfred Ackermann-Teubner Memorial Prize for the Advancement of Mathematical Knowledge.

Expelled from the University

In 1933, Emmy Noether received the same letter as many of her Jewish colleagues. She was expelled from her position at the University of Göttingen due to the new Law for the Restoration of the Professional Civil Service. However, she continued her lectures on class field theory secretly in her apartment until starting her job at the University of Oxford and later the Institute for Advanced Study in Princeton.

Emmy Noether passed away on April 14, 1935. At her memorial, many notable mathematicians and friend’s of Noether like Pavel Alexandrov, Bryn Mawr or Hermann Weyl paid their respects. Although she received little recognition in her lifetime considering the remarkable advances that she made, she has been honoured in many ways following her death.[3]

Emmy Noether is one of the founders of modern algebra. Her mathematical profiling developed in cooperation and discussion with Professor Paul Gordan from Erlangen, who also became her doctoral supervisor. He was often called the “King of the Invariants”. The theory of invariants occupied Emmy Noether until 1919 decidedly. In Göttingen, by then a world centre of mathematical research, she built up her own mathematical school. Noether is also ascribed a decisive role in the implementation of abstract algebraic methods in topology.