You are here: Home › literature › The Life and Works of Johann Wolfgang von Goethe 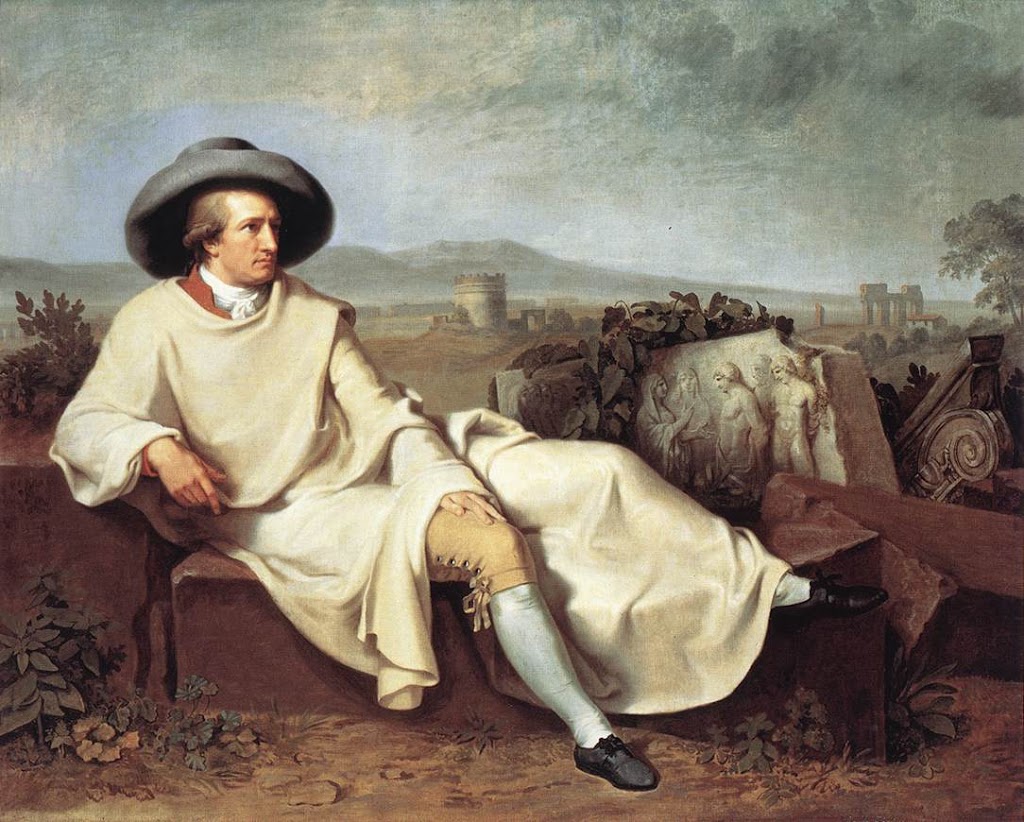 On August 28, 1749, German author, philosopher, natural scientist, and politician Johann Wolfgang von Goethe was born in Frankfurt am Main.  He is considered one of the most important creators of German-language poetry. Goethe’s literary work includes poetry, drama, epic, autobiographical, art, literary theory and scientific writings. His extensive correspondence is also of literary importance. Goethe was the forerunner and most important representative of the Sturm und Drang.

“Noble be man,
Helpful and good!
For that alone
Sets hims apart
From every other creature
On earth.”
— J. W. von Goethe, Das Göttliche (The Divine) (1783)

Johann Wolfgang von Goethe was born as in Frankfurt a. Main, as one of five children to Catharina Elisabeth and Johann Caspar Goethe. Goethe’s mother, Catharina Elisabeth Goethe, née Textor (1731-1808), came from a wealthy and respected Frankfurt family. Goethe’s father Johann Caspar Goethe (1710-1782) had a doctorate in law, but did not practise this profession, but lived on the proceeds of his inherited fortune. He was educated by his father, who owned numerous art collections and more than 2000 books. To satisfy him, Goethe began studying law in Leipzig. Although his father entrusted him to the care of Johann Gottlob Böhme, professor of history and constitutional law, and this Goethe forbade the desired change of subject, he soon began to neglect compulsory studies. He gave preference to Christian Fürchtegott Gellert‘s poetics lectures, to which the students could present their literary experiments. Since Gellert reluctantly accepted verses, he immediately passed on Goethe’s poetic attempts to his deputy, who did not think much of them.

First studies in Leipzig – From Law towards Arts

Meanwhile Goethe’s interest in art and architecture increased. Adam Friedrich Oeser, founding director of the Leipzig Academy of Art, founded in 1764, counts as one of his direct influences. He gave him drawing lessons and introduced him to the art ideal of his student Joachim Joachim Winckelmann[2], which was oriented towards antiquity. Goethe learned the techniques of woodcut and etching from the engraver Johann Michael Stock during his student years in Leipzig. At the age of 18, Goethe was able to publish his first work, ‘Annette‘, a collection of 19 poems dedicated to his girlfriend Anna Katharina Schönkopf. Due to a serious illness, he moved back to Frankfurt in the following year, started to focus on religion and during this period, his famous poems about the moon were written.

In 1770 he continued his law studies in Strasbourg and this time Goethe devoted himself more purposefully to legal studies, but also found time to make a whole series of personal acquaintances. The most important of these was the one with the theologian, art and literary theorist Johann Gottfried Herder.[3] During his almost daily visits, the elder opened his eyes to the original linguistic power of authors such as Homer, Shakespeare and Ossian and to popular poetry, thus providing decisive impulses for Goethe’s poetic development.

“None are more hopelessly enslaved than those who falsely believe they are free.”
— J.W. von Goethe, Elective Affinities (1809)

Even though Goethe opened his own lawyer office, he composed the drama ‘Götz von Berlichigen‘, which was seen as a revolution of the classicism and the foundation of a new era, the ‘Sturm und Drang‘. This era is strongly influenced by Goethe, who published many works, such as ‘The Sorrows of Young Werther‘, a very successful piece due to the recipient’s possibility to identify themselves with the protagonist easily. ‘Prometheus‘ was published in this period as well as ‘Stella‘ or ‘Clavigo‘, his first contemporary theater piece. It was also the era of Storm and Drive in which he published numerous poems, like ‘Ob ich dich liebe, weiß ich nicht‘ from 1770.
(In German language)

In 1775, Goethe began his political career in Weimar, which influenced his literature. At that time he was already a famous author throughout Europe. He quickly won the trust of the eight-year younger Duke Karl August. The Duke did everything to keep Goethe in Weimar; he gave him generous gifts, including the garden house in the Park an der Ilm. When the Duke suggested to him to participate in the management of the state, Goethe accepted after some hesitation. On 3 June 1782, at the Duke’s request, the Emperor awarded him a noble diploma to facilitate his work at court and in state affairs. 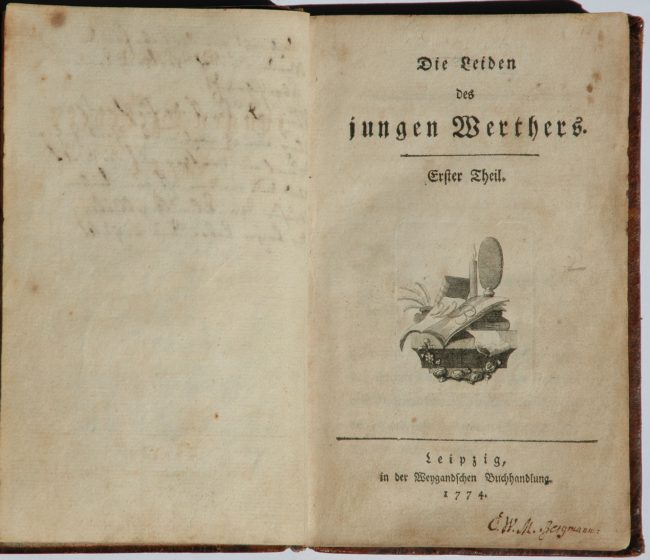 First edition of The Sorrows of Young Werther

Goethe’s most important and formative relationship during this Weimar decade was with the court lady Charlotte von Stein (1742-1827). The seven years elder was married to the quire Baron Josias von Stein, the colonel at the court.[6]  Also he started researching on natural sciences, he published works on color theory,[4] which is now seen as his most important work and owned a great amount of minerals as well as rock samples. He was even head of the zoological and paleontological department at the University of Jena and even today there are still samples in the Phyletic Museum of Jena left from this period.

In the 1780’s, Goethe left Weimar for Italy. For Goethe, the journey became an incisive experience; he himself repeatedly spoke in letters home of a “rebirth”, a “new youth” which he had experienced in Italy, he wrote to the Duke that he had found himself again as an artist. After coming back he finally quit his political duties to devote himself completely to poetry and natural sciences. On 12 July 1788, a few weeks after his return, Goethe met the 23-year-old cleaning lady Christiane Vulpius, who appeared to him as a supplicant for her brother in distress after studying law. She became his mistress and soon afterwards his partner.[7] The little-educated Christiane, who came from a family in financial distress, was denied access to Weimar society, in which Goethe moved. There she was regarded as vulgar and pleasure-seeking, aggravated by the illegitimacy of the “unseemly relationship”. Goethe appreciated her natural, cheerful nature and maintained the connection with his “little eroticon” until the end of Christiane’s life in 1816.

In 1792 Goethe accompanied the Duke at his request into the first coalition war against revolutionary France. For three months, as an observer, he experienced the misery and violence of this war, which ended in a French victory.[8] Looking back, Goethe noted that the French Revolution, as “the most terrible of all events“, had cost him many years of boundless effort “to poetically address its causes and consequences“.

“Only when we know little do we know anything. Doubt grows with knowledge.”
— J. W. von Goethe, Maxims and Reflections (1833)

Goethe and Schiller – a Happy Event

In 1794 he got to know Friedrich Schiller,[1] who counts as one of his greatest influences. The first personal encounter in Rudolstadt in 1788, arranged by Charlotte von Lengefeld, later Schiller’s wife, was relatively emotionless. Living in nearby Jena since 1789 as a history professor, Schiller had asked Goethe in June 1794 to join the editorial board of a journal for culture and art he had planned, the “Horen“. After Goethe’s acceptance, the two met in Jena in July of the same year, “a happy event” for Goethe and the beginning of their friendship with Schiller. The two poets agreed on the rejection of the revolution as well as on the turning towards antiquity as the highest artistic ideal; this was the beginning of an intensive working alliance from which everything more personal was excluded, but which was marked by a deep understanding of the nature and working methods of the other. They began working together and depict the main figures of the ‘Weimar Classicism‘. During these years he could publish the famous poem ‘The Sorcerer’s Apprentice‘ or ‘Roman Elegies‘. But with the passing of Friedrich Schiller, the Weimar Classicism came to an end and Goethe then began focusing more on romantic or classical works.

Goethe as a Scientist

Goethe felt the death of Schiller in 1805 as a drastic loss. In 1810 Goethe published the elaborately equipped Theory of Colours in two volumes and a volume with picture plates. He had been dealing with it for almost twenty years. Goethe dedicated this later life primarily to literature and passed away in 1832 in Weimar. He died on March 22, 1832, probably of a heart attack. Whether his famous last words “More Light!” are authentic is controversial. 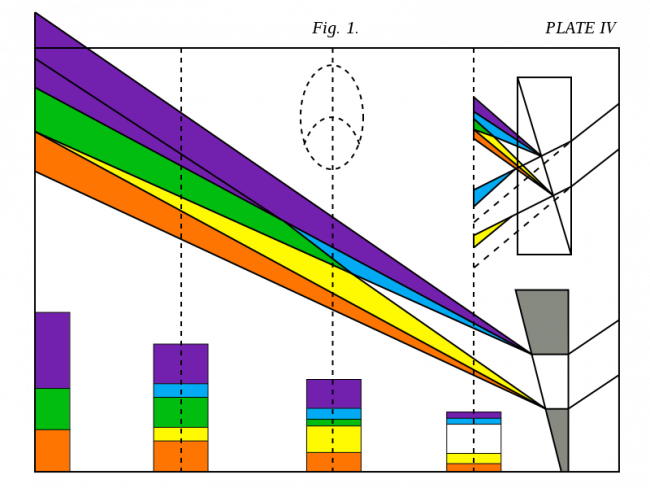 Johann Wolfgang von Goethe has influenced society in a variety of aspects. He could make great contribution to the theory of colors (although he disapproved Isaac Newton violently) and in natural science in general. His remarkable efforts in writing have influenced philosophers like Schopenhauer or Hegel and were set to music by composers like Mozart or Mahler. His writings, above all the Theory of Colours, were controversially discussed in specialist literature from the very beginning; with the further development of the natural sciences, Goethe’s theories were largely regarded as outdated. He experienced a temporary renaissance from 1859, the year of publication of Charles Darwin‘s work On the Origin of Species.[9] Goethe’s assumption of a constant change in the animate world and the traceability of organic forms to a common original form led him to be regarded as a pioneer of evolutionary theories.