You are here: Home › astronomy › Pierre Simon de Laplace and his true love for Astronomy and Mathematics 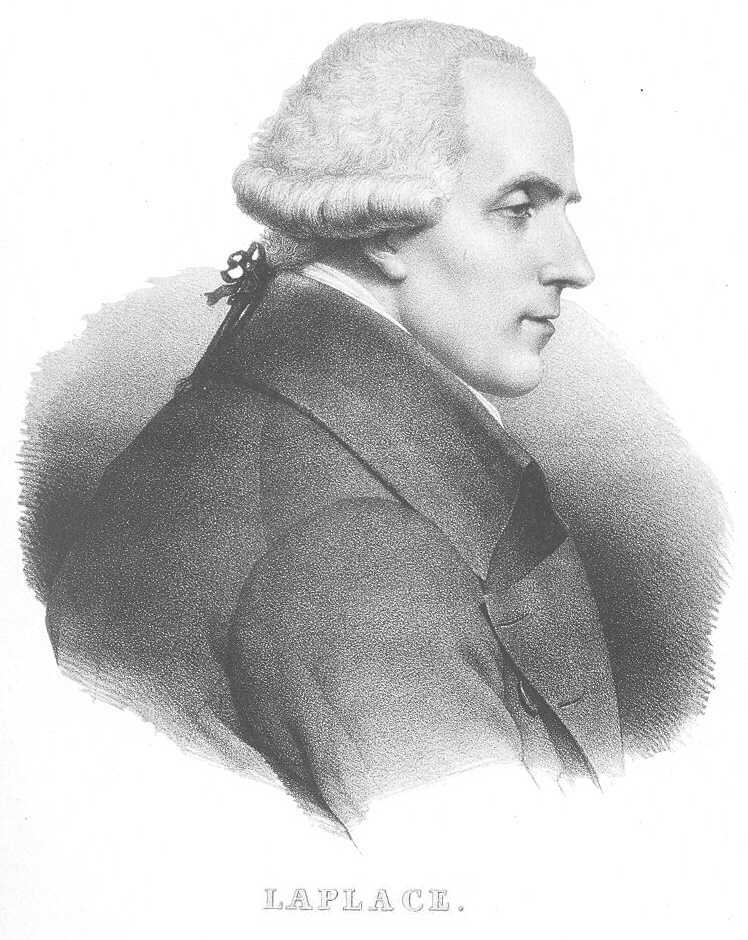 On March 23, 1749, French mathematician and astronomer Pierre Simon marquis de Laplace was born, whose work was pivotal to the development of mathematical astronomy and statistics. One of his major achievements was the conclusion of the five-volume Mécanique Céleste (Celestial Mechanics) which translated the geometric study of classical mechanics to one based on calculus, opening up a broader range of problems.

“One sees, from this Essay, that the theory of probabilities is basically just common sense reduced to calculus; it makes one appreciate with exactness that which accurate minds feel with a sort of instinct, often without being able to account for it.”
– Pierre Simon de Laplace,  Introduction to Théorie Analytique des Probabilités (1814)

The Son of a Cider Merchant

Pierre Simon Laplace, the son of a cider merchant was born in the Normandie, and grew up as a well educated child attending the local school at a Benedictine priory. In later years, he was sent to Caen in order to study theology and philosophy were he found out about his love to mathematics. Laplace quit his studies in 1768 applying to study mathematics under the most famous French mathematician of his time, Jean-Baptiste le Rond d’Alembert.[4] D’Alembert was immediately impressed by the young Laplace and ready to teach and support him.

Already three years later, Laplace taught geometry, trigonometry, analysis and statistics and published several works on game theory, probability theory and other difficult issues to improve his reputation. He was admitted to the Académie Française at only 24 years. Laplace was about to become one of France’s most influential scientists and had the honor to examine the future members of the royal artillery. One of his aspirants was the 16 year old Napoleon Bonaparte, who later offered Laplace a position as his minister of the interior.

The Committee for Weights and Measures

During the French Revolution, Laplace was able to continue his research as far as possible and in 1792 he became a member of the Committee for Weights and Measures, which was later responsible for the introduction of the units metres and kilograms. But Laplace had to give up this office, because with the rule of Robespierre, participation in the revolution and hatred of the monarchy became a condition for the work. After Robespierre himself died by the guillotine on 28 July 1794, Laplace returned to Paris and became one of the two examiners for the École polytechnique in December of that year. In 1795 Laplace resumed his work on the Committee for Weights and Measures and became its chairman. In the same year, the academy was re-established with the umbrella organisation Institut de France. Laplace was a founding member and later also president of the institute.  He also took over the management of the Paris Observatory and the research department.

After Laplace had voted in 1804 in the Senate for Napoleon’s appointment as emperor, he ennobled him to count in 1806. In the same year Laplace moved to Arcueil, a suburb of Paris, in the house next door to the chemist Claude-Louis Berthollet, with whom he founded the Société d’Arcueil. There, they conducted experiments with other, mostly young scientists. Among these scientists were Jean-Baptiste Biot and Alexander von Humboldt.[5] Through this work, however, he made enemies because he set up a clear research programme, which mainly included his own research priorities, and also carried this out mercilessly. Laplace lost further reputation because he continued to hold on to the particle nature of light, while wave theory was increasingly recognised by Augustine Jean Fresnel.[6]

Laplace created further opponents when he voted for Napoleon’s deposition in 1814 and immediately made himself available for the Bourbon restoration. King Louis XVIII, on the other hand, made Laplace a Pair of France in 1815 and a Marquis in 1817. In 1816 Laplace stopped working at the École polytechnique and became a member of the 40 Immortals of the Académie française.

However, Laplace’s scientific contributions are numerous. In the field of astronomy, he published a work titled Traité de Mécanique Céleste, a collected work of all scientific approaches after Newton. In the book series he also demonstrated the mathematical prove for the stability of planetary orbits – due to irregularities in the orbit curves, it was believed at the time that the solar system could collapse – and hypothesized about the possibility of black holes. This work was a great success and used and studied by every astronomer or those willing to be one. Laplace’s second major field of research was probability theory. For Laplace, it was a way out to achieve certain results despite a lack of knowledge. In his two-volume work Théorie Analytique des Probabilités (1812), Laplace gave a definition of probability and dealt with dependent and independent events, especially in connection with gambling. He also dealt in the book with the expected value, mortality and life expectancy. The work refuted the thesis that a strict mathematical treatment of probability was not possible. Laplace has always been more a physicist than a mathematician. Mathematics served him only as a means to an end. Today, however, the mathematical methods that Laplace developed and used are much more important than the actual work itself, like the Laplace operator, or the Laplace transform.

Laplace died in Paris in 1827. His brain was removed by his physician, François Magendie, and kept for many years, eventually being displayed in a roving anatomical museum in Britain.