You are here: Home › philosophy › You Don’t Exist – according to David Hume 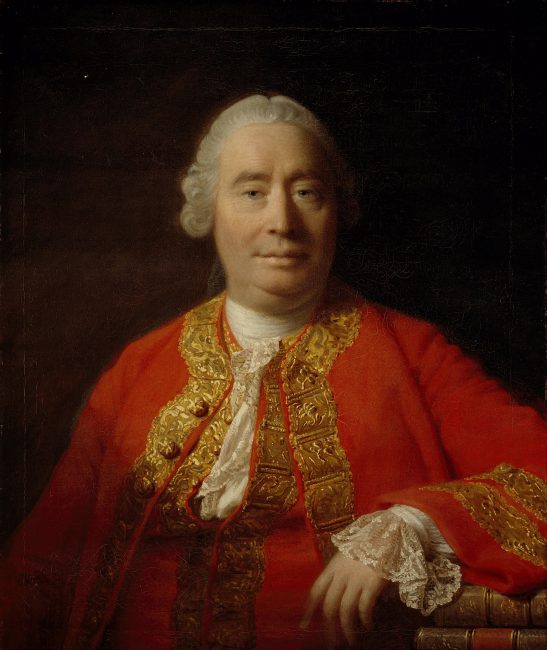 On May 7, 1711, the great Philosopher David Hume was born. He was one of the most important figures in the history of Western philosophy as well as the Scottish Enlightenment. In his ‘Treatise of Human Nature‘ (1739), he was about to create a total naturalistic “science of man” examining the psychological basis of human nature. In stark to Descartes, he concluded that desire rather than reason governed human behavior:

Waking Up from Dogmatic Slumbers

In the skeptical philosophical tradition Hume argued against the existence of innate ideas, concluding instead that humans only have knowledge of things they directly experience. Thus he divides perceptions between strong and lively “impressions” or direct sensations and fainter “ideas,” which are copied from impressions. He developed the position that mental behavior is governed by “custom”. Without direct impressions of a metaphysical “self,” he concluded that humans have no actual conception of the self, only of a bundle of sensations associated with the self.

“Be a philosopher but, amid all your philosophy be still a man.” (D. Hume: An Enquiry Concerning Human Understanding, 1748)

Kant credited Hume with waking him up from his “dogmatic slumbers” and Hume has proved extremely influential on subsequent philosophy.[5]

Youth and Education of David Hume

David Hume joined the University of Edinburgh around the age of 12, intending to study law. He never graduated. Around the age of 18, Hume made a philosophical discovery that opened up to him “a new Scene of Thought”, which inspired him “to throw up every other Pleasure or Business to apply entirely to it“. Hume’s attempt to supplement his lifestyle dedicated to science with a commercial activity failed. From 1734 he worked for about half a year as a clerk for a merchant in Bristol. During this activity he changed the spelling of his surname from ‘Home’ to Hume in order to adapt it to the English pronunciation. The merchant and his friends mocked Hume for his Scottish nationality, pronunciation and knowledge. This also contributed to his soon leaving the office. From 1734 Hume stayed in Paris and Reims. He liked the French lifestyle. In the summer of 1735 he moved to La Flèche near Le Mans on the Loire. René Descartes had gone to school in the Jesuit monastery of the village. Hume worked for two years in a private apartment in La Flèche to complete his A Treatise of Human Nature.

A Treatise of Human Nature

In the introduction to A Treatise of Human Nature, Hume wrote, “‘Tis evident, that all the sciences have a relation, more or less, to human nature … Even Mathematics, Natural Philosophy, and Natural Religion, are in some measure dependent on the science of Man.” He also wrote that the science of man is the “only solid foundation for the other sciences” and that the method for this science requires both experience and observation as the foundations of a logical argument.

One of the most central doctrines of Hume’s philosophy, stated in the very first lines of the Treatise, is his notion that the mind consists of its mental perceptions, or the mental objects which are present to it, and which divide into two categories: impressions and ideas. Hume’s Treatise thus opens with the words: ‘All the perceptions of the human mind resolve themselves into two distinct kinds, which I shall call IMPRESSIONS and IDEAS.” Hume states that “I believe it will not be very necessary to employ many words in explaining this distinction” and commentators have generally taken Hume to mean the distinction between feeling and thinking 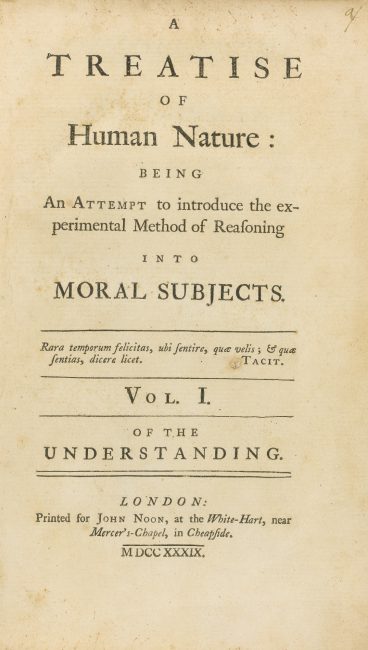 A Treatise of Human Nature by David Hume (1739)

The Problem with the Outside World

The problem of the outside world is the philosophical question of whether the outer things around us exist independently and differently from our perceptions. Hume dealt with this problem, among other things, in his treatise on human nature. He stated that belief in the existence of the outside world cannot be supported by rational justifications. According to his basic sensualist thesis, the senses are the only source of our knowledge of the outside world, and these provide us with only perceptions, but not the slightest indication, that our views or interpretations are caused by something outside themselves. According to Hume, there is no self or I. In his explanation he again made use of his basic thesis of sensualism. Hume pointed out that there are also other cases in which identity is attributed, even though it does not exist in the strict sense.  For example, a ship in which a plank is replaced is still considered to be the same, even though, according to Hume, it can no longer really be equated with the previous ship, since after repair it is partly made of other material.

The History of England

David Hume worked on “A Treatise of Human Nature” for around four years. The Treatise is considered to be Hume’s most important work and one of the most influential works in the history of philosophy. It is a classic statement of philosophical empiricism, skepticism, and naturalism. In the introduction Hume presents the idea of placing all science and philosophy on a novel foundation: namely, an empirical investigation into human nature. A few years after Hume’s literary debut, the author became successful as an essayist and started a career at the University of Edinburgh. Due to his access to research materials at the university, Hume was able to write his six-volume work “The History of England“. The work was highly successful from the beginning and became a standard history of England.

Putting the Human Being in the Center

Hume placed the human being at the centre of his philosophy. He assumed that people were born to act and think. For this reason, his philosophy developed a framework of basic assumptions that provided explanations and instructions for human action and thinking. He called these basic assumptions ‘principles‘. These are rules, or regular processes, which for Hume were not given to man as eternal laws, but were found by one man for another man. The results of his philosophy – as Hume introduced himself – were intended to improve society and fundamentally change the sciences.

Once again in 1751 Hume applied for a professorship, namely for the chair of logic in Glasgow, but in 1752 he failed again, so that he remained the only important Scottish philosopher in the Age of Enlightenment who was denied a university career. During the 1760s, David Hume became secretary to the British embassy. Hume returned to London in 1766, where he had invited Jean-Jacques Rousseau, who was wanted with a warrant for his arrest, to seek asylum there. After a few months, however, Rousseau fled out of mistrust of Hume, settled his dispute with him in journalism and returned to France somewhat later. In 1767, Hume was appointed Under Secretary of State for the Northern Department. Here he wrote that he was given “all the secrets of the Kingdom”. Two years later, Hume returned to Edinburgh. During his last years, Hume wrote a brief autobiographical essay titled “My Own Life”. David Hume died on 25 August 1776 in Edinburgh at age 65.

Historians of philosophy agreed and largely agree that David Hume – along with John Locke – is the most important philosopher who has ever written in English.