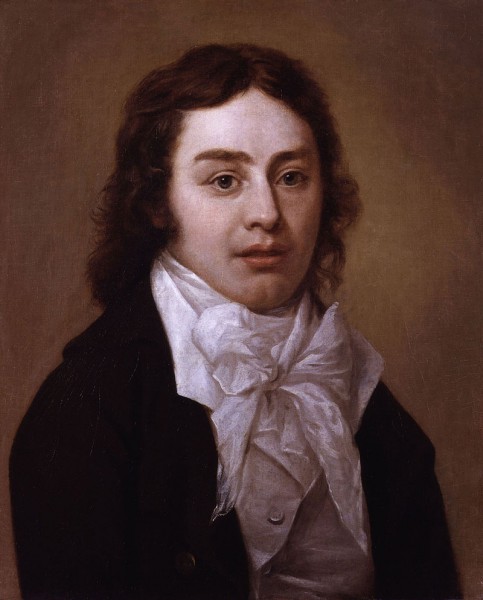 On July 25, 1834, English poet, literary critic and philosopher Samuel Taylor Coleridge passed away. Together with his friend William Wordsworth, he is considered the founder of the Romantic Movement in England. He wrote the poems The Rime of the Ancient Mariner and Kubla Khan, as well as the major prose work Biographia Literaria. His critical work, especially on Shakespeare, was highly influential, and he helped introduce German idealist philosophy to English-speaking culture.

It is an ancient Mariner,
And he stoppeth one of three.
“By thy long gray beard and glittering eye,
Now wherefore stopp’st thou me?”
from The Rime of the Ancient Mariner, Samuel Taylor Coleridge (1798)

Coleridge was born on 21 October 1772 in the town of Ottery St Mary in Devon, England, to the Reverend John Coleridge, the well-respected vicar of St Mary’s Church, Ottery St Mary and headmaster of the King’s School, and his second wife Anne Bowden. Coleridge suggests that he “took no pleasure in boyish sports” but instead read “incessantly” and played by himself. After John Coleridge died in 1781, 8-year-old Samuel was sent to Christ’s Hospital, in Greyfriars, London, where he remained throughout his childhood, studying and writing poetry, and where he met lifelong friend Charles Lamb. According to the intention of his father, Coleridge entered Jesus College, University of Cambridge in 1791, where he focused on a future in the Church of England. Coleridge’s views, however, began to change over the course of his studies.[2] At both school and university he continued to read voraciously, particularly in works of imagination and visionary philosophy, and he was remembered by his schoolmates for his eloquence and prodigious memory.[3]

Cambridge and the French Revolution

In his third year at Cambridge, oppressed by financial difficulties, Coleridge went to London and enlisted as a dragoon under the assumed name of Silas Tomkyn Comberbache. But, when discovered, he was bought out by his brothers and restored to Cambridge. The intellectual and political turmoil surrounding the French Revolution had set in motion intense and urgent discussion concerning the nature of society. Coleridge now conceived the design of establishing a small society that should organize itself and educate its children according to better principles than those obtaining in the society around them. A chance meeting with the poet Robert Southey led the two men to plan such a “pantisocracy” and to set up a community by the Susquehanna River in Pennsylvania.

In October 1795 he married Sara Fricker, daughter of a local schoolmistress, as marriage was an integral part of the plan for communal living in the New World. But shortly afterward, Southey defected from the pantisocratic scheme, leaving Coleridge married to a woman whom he did not really love.[3] Left without an alternative plan, Coleridge spent the next few years beginning his career as a writer.[2] During this period, however, Coleridge’s intellect flowered in an extraordinary manner, as he embarked on an investigation of the nature of the human mind, joined by William Wordsworth, with whom he had become acquainted in 1795 and had become his collaborator and constant companion.[4,5]

The Rhyme of the Ancient Mariner

In the years 1797 and 1798 he lived near Wordsworth and his sister, Dorothy, in Somersetshire. Together with Wordsworth he published the Lyrical Ballads (1798), a collection of twenty-three poems, containing nineteen of Wordsworth’s poems and four of Coleridge’s. The most famous of these was “The Rime of the Ancient Mariner“. Besides Coleridge composed the symbolic poem Kubla Khan, written about the Mongol emperor Kublai Khan and his legendary palace at Xanadu and — as Coleridge himself claimed — as a result of an opium dream, in “a kind of a reverie”; and the first part of the narrative poem Christabel. During this period, he also produced his much-praised “conversation” poems This Lime-Tree Bower My Prison, Frost at Midnight, and The Nightingale. Poems like these both drew inspiration from and helped to inflame the craze for Gothic romance. 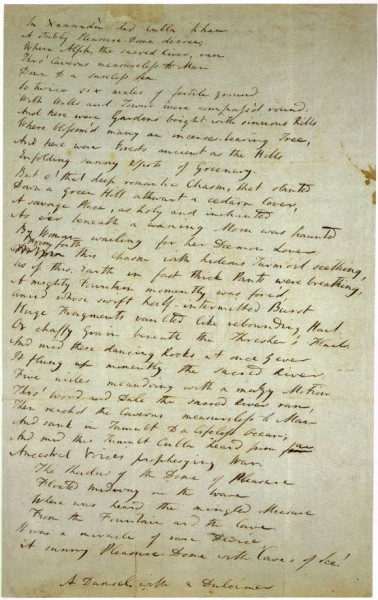 Wordsworth and Coleridge traveled to the Continent together, where Coleridge spent most of the trip in Germany, studying the philosophy of Immanuel Kant, Jakob Boehme, and G. E. Lessing. In 1800 Coleridge returned to England and settled in the Lake District, where he spent a miserable life for twelve years. The climate made his many ailments worse. For pain relief he took laudanum, a type of opium drug, and soon became an addict. In addition, his marriage was failing. However, in 1802, he did publish the last and most moving of his major poems, “Dejection: An Ode.“[6] In 1804 he travelled to Sicily and Malta, working for a time as Acting Public Secretary of Malta under the Commissioner, Alexander Ball. His opium addiction now began to take over his life: he separated from his wife in 1808, quarrelled with Wordworth in 1810, lost part of his annuity in 1811, put himself under the care of Dr. Daniel in 1814, and finally moved in with Dr. Gilman in Highgate, London, where the doctor and his family managed for the next 18 years to keep his demon under control.[7]

Coleridge died in Highgate, London on 25 July 1834 as a result of heart failure compounded by an unknown lung disorder, possibly linked to his use of opium.

Coleridge was one of the most important figures in English poetry. His poems directly and deeply influenced all the major poets of the age. He was known by his contemporaries as a meticulous craftsman who was more rigorous in his careful reworking of his poems than any other poet. His influence on Wordsworth is particularly important because many critics have credited Coleridge with the very idea of “Conversational Poetry”, i.e. the idea of utilizing common, everyday language to express profound poetic images and ideas for which Wordsworth became so famous may have originated almost entirely in Coleridge’s mind.