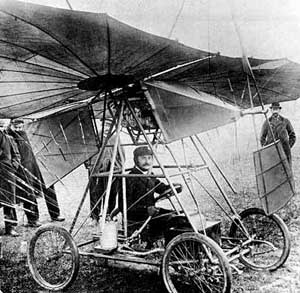 On March 18, 1906, the flying machine of Romanian inventor Traian Vuia lifted briefly to a powered hop of 11 metres. Though unsuccessful in sustained flight, Vuia‘s invention influenced Louis Blériot in designing monoplanes.[3] In difference to the flying machine of the Wright brothers that made first motor powered flight in December 1903 [2], Vuia‘s machine had the capability to take off from a flat surface, without assistance such as an incline, rails, or catapult.

Traian Vuia was born to Romanian parents Simion Popescu and Ana Vuia living in Surducul-Mic, a village in the Banat region, Austro-Hungarian Empire, today in Romania. Actually the place today is also called Traian Vuia. After graduating from high school in Lugoj, in 1892, he enrolled in the School of Mechanics at the Polytechnic University of Budapest where he received his engineering diploma. He then joined the Faculty of Law in Budapest, Hungary, where he earned a Ph.D. in law in May 1901 with the thesis “Military and Industry, State and Contract regime“. Despite this change which came out in his life, he continued to study by himself those technical problems which he was particularly interested in, the most important one being the problem of flight.[5]

He returned to Lugoj, where he designed his first flying machine, which he called the “airplane-car”. He attempted to build the machine, but due to financial constraints decided to go to Paris in July 1902, hoping to find someone interested in financing his project, possibly balloon enthusiasts. He met with considerable skepticism from people who believed that a heavier-than-air machine could not fly. He then met famous French engineer Victor Tatin, who had built an aircraft model, the Aéroplane, which was the first model airplane to take off using its own power after a run on the ground. Tatin was interested in the project, but doubted that Vuia had a suitable engine or that his aircraft would be stable. Vuia then presented his plan to the Académie des Sciences in Paris in 1903, but was rejected with the comment:

“The problem of flight with a machine which weighs more than air can not be solved and it is only a dream.“

Undeterred, Vuia applied for a French patent on May 15, 1903, and obtained patent No. 332106 for his design. He began to build his first flying machine in the winter of 1902–3. Overcoming more financial difficulties, he also started construction of an engine of his own design for which he was granted various patents, the first in 1904. Tatin designed the propellor for Traian Vuia’s experimental aircraft, who, seeing that Vuia’s airplane becomes a reality, decided to help him.[5] By December 1905 Vuia had finished construction of the “Vuia I“, often also dubbed as “The Bat” because of its shape. This was a high-wing monoplane constructed entirely of steel tubing. The wing was mounted on the apices of these frames and resembled those of Otto Lilienthal’s gliders [1].

It was powered by a carbonic acid gas engine driving a single tractor propeller. The 25 hp engine had to be adapted by Vuia himself as a suitable engine was not available. He found a place in Montesson, near Paris, where he could test his airplane and on March 18, 1906, the Vuia I lifted off briefly. After accelerating for about 50 m, the aircraft left the ground and travelled through the air at a height of about 1 m for a distance of about 12 m, but then the engine cut out and it came down. Caught by the wind it was damaged against a tree. On August 9, a longer hop of 24 m at a height of about 2.5 m was achieved, ending in a heavy landing which damaged the propeller.

While he was building his airplane Vuia received some visitors like George Besancon, Santos-Dumont etc., well known as personalities in aviation. Most of them were shocked by the fact that Vuia adopted a mono-plane solution for his airplane, because all planes which had flown by then were built after Lilienthal’s and Octave Chanute’s double-plane idea [6]. Vuia’s argument was that he was inspired by nature.[5] 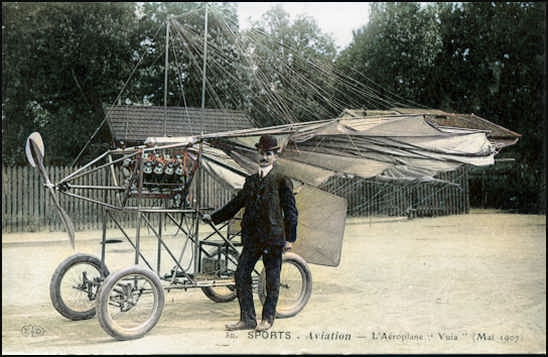 Many newspapers in France, the US, and the United Kingdom wrote about the first man to fly with a heavier-than-air machine with their own take off systems, propulsion units and landing gear. The thing that has been emphasized eversince about Vuia’s achievement, is that his machine was able to take off on a flat surface “only by on-board means”, without any “outside assistance”, be it an incline, rails, a catapult, etc.[4] Six moths later Santos-Dumont succeeded in a similar attempt;[8] he is sometimes quoted as the first who flew using only his on board installations, because his flight was officially controlled.[5]

In 1907, his “Vuia II” airplane, with an Antoinette 25 hp (19 kW) engine, was exhibited at the first Aeronautical Salon in Paris. Between 1918 and 1921 he built two experimental helicopters on the Juvissy and Issy-les-Moulineaux aerodromes, contributing to the development of vertical take-off.[4] Though unsuccessful in sustained flight, Vuia’s invention influenced Louis Blériot in designing monoplanes [3]. Another great invention was the development of a steam generator that could produce steam pressures of more than 100 atm (10 MPa). These generators are still used today in some power plants. On May 27, 1946, Vuia was named an Honorary Member of the Romanian Academy.

Trajan Vuja died on September 3, 1950, at age 78, in Bucharest, Romania. He is buried at Bellu Cemetery in Bucharest. Today, Timișoara Airport (TSR) bears his name. It is the second largest airport in Romania.