You are here: Home › aviation › Octave Chanute – One of the Fathers of Aviation 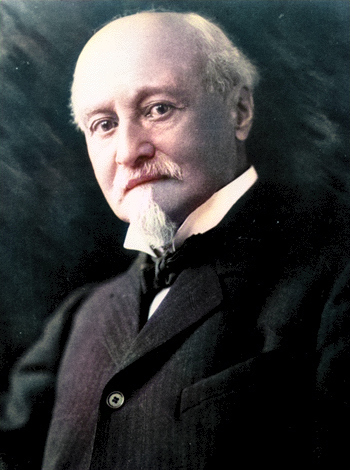 On February 18, 1832, French-born American railway engineer and aviation pioneer Octave A. Chanute was born. He provided many budding enthusiasts, including the Wright brothers [6] with help and advice, and helped to publicize their flying experiments. At his death he was hailed as the father of aviation and the heavier-than-air flying machine.

“Let us hope that the advent of a successful flying machine, now only dimly foreseen and nevertheless thought to be possible, will bring nothing but good into the world; that it shall abridge distance, make all parts of the globe accessible, bring men into closer relation with each other, advance civilization, and hasten the promised era in which there shall be nothing but peace and goodwill among all men.”
— Octave Chanute, 1894, [10]

Immigrating to the United States with his father in 1838, Chanute attended private schools in New York City. His first job was as a member of a surveying crew with the Hudson River Railroad. He then worked his way up through a series of increasingly responsible engineering positions on western railroads. In addition, he served as chief engineer on a variety of important projects, notably the construction of the first bridge across the Missouri River.[1] Chanute was widely considered brilliant and innovative in the engineering profession. During his career he designed and constructed the United States‘ two biggest stock yards, Chicago Stock Yards (1865) and Kansas City Stockyards (1871). He designed and built the Hannibal Bridge which was the first bridge to cross the Missouri River in Kansas City, Missouri, in 1869 and established Kansas City as the dominant city in the region. He designed many other bridges during his railroad career. Chanute also established a procedure for pressure-treating wooden railroad ties with an antiseptic that increased the wood’s lifespan in the tracks. In 1883, Chanute retired from the Erie Railway to become an independent engineering consultant.

The Development of Mechanical Flight

Already in 1875, he had visited Europe and learned of the extensive efforts being made there, particularly by F.H. Wenham in England, to develop mechanical flight. Not until he retired from his engineering business in 1889 did Chanute have opportunity for personal study and experiment in aeronautics. With the same analytical persistence that had made him a successful engineer he undertook to learn what had gone before. Chanute collected all available data from flight experimenters around the world and combined it with the knowledge gathered as a civil engineer in the past. He published his findings in the influential book Progress in Flying Machines in 1894. This was the most systematic global survey of fixed-wing heavier-than-air aviation research published up to that time.[2] 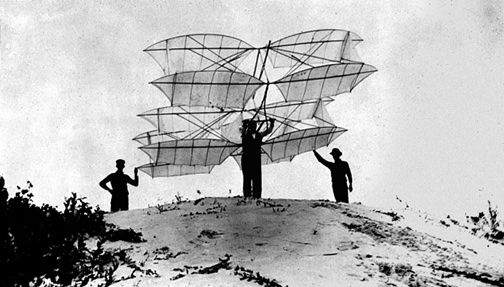 A twelve-winged glider of Chanute’s design, prepared for launch from the dunes of Miller Beach in 1896.

Chanute was too old to fly himself, so he partnered with younger experimenters, including Augustus M. Herring and William Avery. In 1896 Chanute, Herring, and Avery tested a design based on the work of German aviation pioneer Otto Lilienthal,[4] as well as hang gliders of their own design in the dunes along the shore of Lake Michigan near the town of Miller Beach, Indiana, just east of what became the city of Gary. Chanute also sponsored the work of others, including the Albatross by Bustov and a paper tube glider that was ruined by a rainstorm before it could be tested. These experiments convinced Chanute that the best way to achieve extra lift without a prohibitive increase in weight was to stack several wings one above the other, an idea proposed by the British engineer Francis Wenham in 1866 and realized in flight by Otto Lilienthal [4] in the 1890s. Chanute introduced the “strut-wire” braced wing structure that would be used in powered biplanes of the future, not seriously challenged until the pioneering efforts of Hugo Junkers [5] to develop all-metal cantilever airframe technology without external bracing from 1915 onwards. The Wright brothers [6] based their glider designs on the Chanute “double-decker,” as they called it. A new design of a biplane glider was developed and flown in 1897.

“For some years I have been afflicted with the belief that flight is possible to man. My disease has increased in severity and I feel that it will soon cost me an increased amount of money if not my life. I have been trying to arrange my affairs in such a way that I can devote my entire time for a few months to experiment in this field.”
– Wilbur Wright in a Letter to Octave Chanute (13 May 1900)

Chanute corresponded with many aviation pioneers, including Otto Lilienthal, Gabriel Voisin, Louis Blériot, and Alberto Santos Dumont.[7] Chanute had already been in correspondence with Lilienthal since 1893. Chanute can be regarded as a decisive link between Lilienthal’s findings and those of the Wright brothers. Chanute freely shared his knowledge about aviation with anyone who was interested and expected others to do the same, although he did encourage colleagues to patent their inventions. With the help of his publications, the Wright brothers deepened their knowledge of flight dynamics. But, his open approach led to friction with the Wright brothers, with whom he had exchanged more than 100 letters between 1900 and 1910. Neverthess, Chanute helped to publicize the Wright brothers’ work, and provided consistent encouragement. He also witnessed many of the early Wright flights, including the 1902 glider and 1904 and 1905 powered flyer. Chanute died on November 23, 1910, in Chicago, Illinois. Chanute Peak, a mountain in Antarctica, has borne his name since 1960.

Alexander Lippisch, The Secret of Flight 3: History of Early Flight, [15]