You are here: Home › aviation › The Wright Brothers Invented the Aviation Age 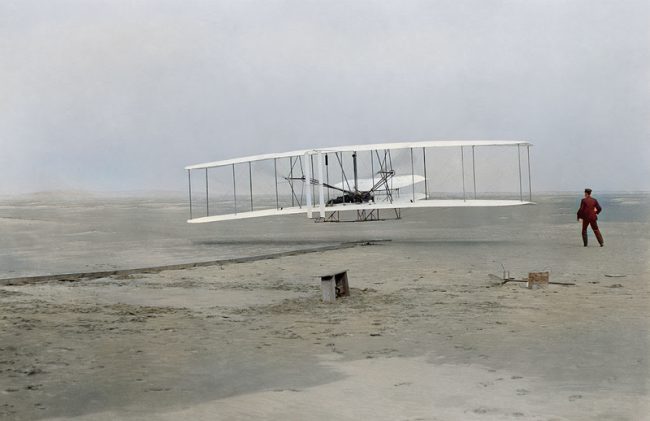 The first flight of the Wright Brothers on December 17, 1903

On December 17, 1903, the brothers Orville and Wilbur Wright wrote history with the first flight of their Flyer One, the very first successful powered aircraft in the sands south of Kitty Hawk, North Carolina, U.S.

“Isn’t it astonishing that all these secrets have been preserved for so many years just so we could discover them!”
– Orville Wright

Although the Brothers Montgolfier had ascended in their first hot air balloon already in the late 18th century, the problem of imitating or adapting the flight of birds for humans continued to be an unsolvable problem until the early 20th century.[5] It was German engineer Otto Lilienthal who first succeeded in crafting a working gliding plane that was able to carry a human in 1892.[6] Unfortunately, Lilienthal lost his life during his experiments with the glider in 1896, when his glider crashed because of its insufficient guidance system. But, besides other early pioneers of aviation, such as e.g., the Scotsman Percy S. Pilcher, the US-american Octave Chanute,[7] his countryman Samuel Pierpoint Langley or German-born Gustav Weißkopf (Whitehead), the Brothers Wilbur and Orville Wright were the first that really succeeded to construct a working powered aircraft.

The Brother Wright run a bicycle repair and sales shop, capitalizing on the national bicycle craze, where in 1896 they began manufactoring their own brand. They used this endeavor to fund their growing interest in flight. In the early or mid-1890s they saw newspaper or magazine articles and probably photographs of the dramatic glides by Otto Lilienthal in Germany. In May 1896, Smithsonian Institution Secretary Samuel Langley successfully flew an unmanned steam-powered model aircraft and in the summer, Chicago engineer and aviation authority Octave Chanute brought together several men who tested various types of gliders over the sand dunes along the shore of Lake Michigan.

Despite Lilienthal’s fate, the brothers favored his strategy: to practice gliding in order to master the art of control before attempting motor-driven flight. The death of British aeronaut Percy Pilcher in another hang gliding crash in 1899 only reinforced their opinion that a reliable method of pilot control was the key to successful and safe flight. Although agreeing with Lilienthal’s idea of practice, the Wrights saw that his method of balance and control by shifting his body weight was fatally inadequate. They were determined to find something better. 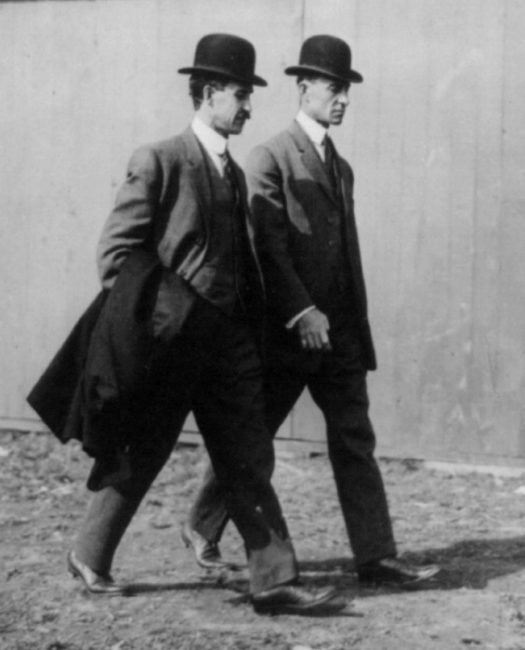 Wright brothers at the Belmont Park Aviation Meet in 1910

As test area for their aviation experiments they chose the costal region of Kitty Hawk, North Caroline, with gentle dunes and constant winds. Their first glider that could be controlled and guided on all three axes set the foundation for their “Flyer 1”, which on December 17, 1903, started to a spectacular flight. Well, the first flight on that very day was merely a jump of about 40 meters length and 12 seconds duration. But, with the 4th try on that day, the plane stayed about a minute up in the air. For the Flyer 1, the Wright brothers had to construct their own engine, because there were no suitable engines available at that time. They turned to their shop mechanic, Charlie Taylor, who built an engine in just six weeks in close consultation with the brothers. 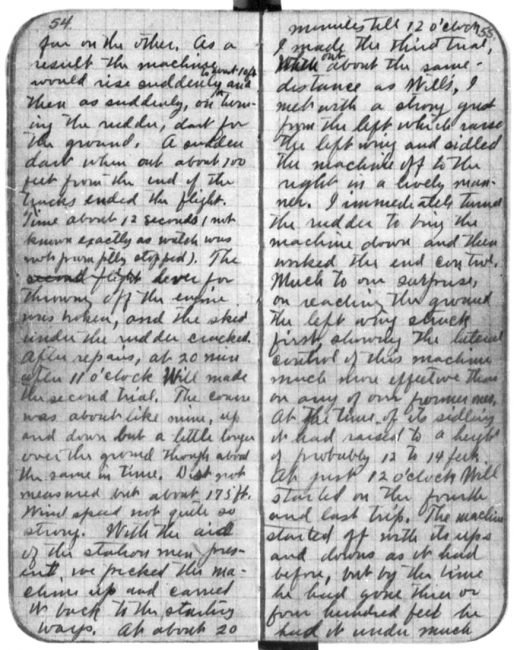 To keep the weight low enough, the engine block was cast from aluminum, a rare practice for the time. The propeller drive chains of the Flyer 1, resembling those of bicycles, were actually supplied by a manufacturer of heavy-duty automobile chain-drives. Overall the Flyer 1 cost less than a thousand dollars and had a wingspan 12.3 m, weighed 274 kg and was powered by a 12 horsepower (8.9 kW) 82 kg engine. After the men hauled the Flyer back from its fourth flight, a powerful gust of wind flipped it over several times, despite the crew’s attempt to hold it down. Severely damaged, the airplane never flew again.

After a single statement to the press in January 1904 and a failed public demonstration in May, the Wright Brothers did not publicize their efforts, and other aviators who were working on the problem of flight (notably Alberto Santos-Dumont)[9] were thought by the press to have preceded them by many years. Indeed, several short heavier-than-air powered flights had been made by other aviators before 1903, leading to controversy about precedence. The Wrights, however, claimed to be the first of these which was “properly controlled.” In 1910 the Wrights first made attempts to exhibit the Flyer in the Smithsonian Institution but talks fell through with the ensuing lawsuits against Glenn Curtiss and the Flyer may have been needed as repeated evidence in court cases.

Wilbur died in 1912, and in 1916, as the patent fights were ending, Orville brought the Flyer out of storage and prepared it for display at the Massachusetts Institute of Technology. On December 17, 1948, 45 years to the day after the aircraft’s only flights, the Flyer was put on display in the Arts and Industries Building of the Smithsonian. In 1976, it was moved to the Milestones of Flight Gallery of the new National Air and Space Museum. Since 2003 it has resided in a special exhibit in the museum titled “The Wright Brothers and the Invention of the Aerial Age,” honoring the Wright Brothers in recognition of the 100th anniversary of their first flight.