You are here: Home › aviation › Louis Blèriot’s famous Flight across the English Channel 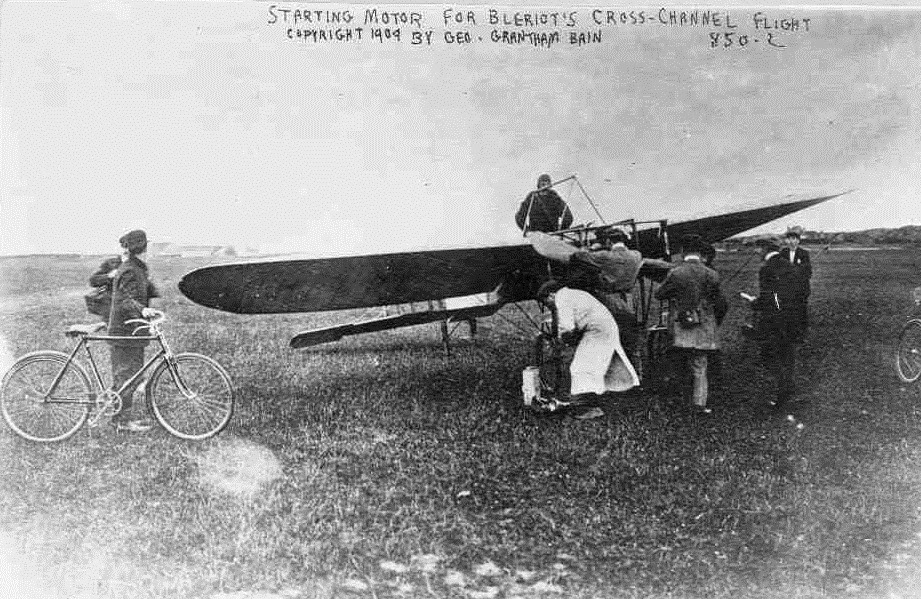 On July 25, 1909, French aviation pioneer Louis Blériot successfully crossed the English Channel from Calais to Dover Castle in a heavier than air aircraft.

Louis Bleriot was born on July 1, 1872, in Cambrai, France, as the first of five children to Clémence and Charles Blériot. In 1882, Blériot was sent as a boarder to the Institut Notre Dame in Cambrai. By the age of 15, he moved on to the Lycée at Amiens, where he lived with an aunt. After passing the exams for his baccalaureate in science and German, he determined to try to enter the prestigious École Centrale in Paris. On a term of compulsory military service, he spent a year as a sub-lieutenant in the 24th Artillery Regiment, stationed in Tarbes in the Pyrenees.. The talented young man then joined an electrical engineering company, but left it as soon as he constructed the first practical headlamp for automobiles. He successfully sold his items to Renault and Panhard-Levassor the two most influential car manufacturers back then.

From Cars to Aviation

Next to his interests in cars and electricity, Blériot put his focus increasingly on aviation. In 1900, he began experimenting which his successful business allowed financially. Like many other aviation pioneers, he began – from 1900 – with the construction of so-called ornithopters, constructions in which the flapping wings of birds were imitated. He produced gliders in the workshop he founded for aeroplanes, later also biplanes and from 1906 monoplane motor planes. Compared to other aircraft pioneers, such as the Wright brothers, Blériot’s experiments were relatively haphazard.[5] This was reflected in various failed constructions. Almost all versions back then were powered with the lightweight Antoinette engines, built by Levavasseur. The latest version, Blériot IV was damaged in a taxiing accident in 1906 and caused the disolvement of the inventor’s partnership with Voisin. At the same day, Alberto Santos Dumont managed to fly over 220 metres, causing him lots of fame and awards by the Aéro Club de France.[4]

Blériot decided to start his own business, creating his very own aircrafts leading to the world’s first successful powered monoplane. In 1907, Blériot made significant advancements on ground runs with the Blériot V, but also damaged the craft’s undercarriage badly. In the same year, he hit the ground with the aircraft nose-first and the inventor and engineer was luckily unhurt even though the plane was almost completely destroyed. More testing and experimenting followed and resulted in the Blériot VII, first successful monoplane. People started recognizing Blériot’s achievements and admired him for successfully flying over 500 metres including a U-turn. The first cross country flight followed in 1908.

Blériot worked temporarily with Gabriel Voisin, another French aircraft pioneer. Some flying machines were constructed, but they were not very successful. Different views on aircraft construction led to the end of the cooperation in 1908. Voisin did not see the future of the plane in the monoplane. Blériot disagreed and further developed airplanes of this design. After a few more failed attempts, the eleventh of his designs, which he brought into the air without an accident, was the Blériot XI monoplane, an aircraft that performed remarkably well at the time.

In the following months, Blériot flew longer, higher, faster and received more and more public attention. On July 19, the record breaking engineer received a letter to cross the English Channel in a heavier-than-air aircraft in order to win a thousand-pound prize. On 25 July 1909, Blériot became the first person to cross the English Channel in an aeroplane with the Blériot XI, which he designed himself. He needed 37 minutes for the approximately 35 km long route from Calais to Dover, which results in an average speed of about 57 km/h. The distance between Calais and Dover is about 35 km. The average altitude was 100 meters. His competitor Hubert Latham had fallen in the water with his Antoinette IV during his attempt to cross the river on 19 July 1909 after 13 kilometres due to engine problems. Blériot was thus able to accept the cash prize of 1,000 pounds sterling, today the equivalent of 100,000 euros, offered by the English newspaper Daily Mail for the first channel crossing. This also solved his financial problems, as he had invested practically all his fortune and that of his wife Alicia, whom he had married in 1901, in his constructions.

The Father of the Modern Monoplane

On this flight, Blériot received more than a hundred orders for the Type XI, ultimately producing a total of around 800 units. Blériot thus became the first commercial aircraft manufacturer. Later he was called the “father of the modern monoplane”. After his historic flight across the English Channel Blériot devoted himself increasingly to the series production of aircraft, set up his own airfield near Buc, opened flight schools and a production plant in England. In 1914, he acquired the French aircraft company Société de Production des Aéroplanes Deperdussin, the Société Pour les Appareils Deperdussin, and renamed the relatively well-known company Société Pour l´Aviation et ses Dérives, so that the initials were preserved. SPAD fighter planes were known and successful during the First World War. In later years, Blériot was involved in long lasting patent battles with the Wright Brothers, but their claims were later dismissed.

After World War I

After the First World War, Blériot founded a new company, the Blériot Aéronautique, which mainly produced commercial aircraft in addition to some relatively insignificant bombers, most of which were outdated in design. Louis Bleriot revolutionized aviation and continued teaching flight to younger students and gave technical advices to further aircraft builders until his passing on August 1, 1936.