You are here: Home › botany › William Withering and the Clinical Value of Digitalis 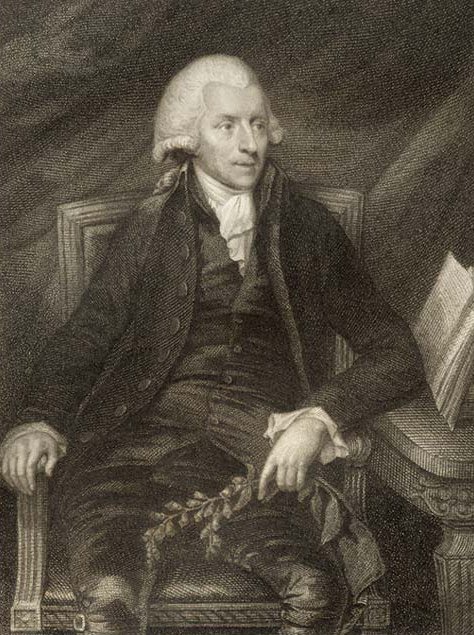 On March 17, 1741, English botanist, geologist, chemist, physician William Withering was born. From his interest in botany, he paid attention to folk remedies used by herb-gatherers, and discovered digitalis, a very useful drug used to steady and strengthen heart action.

“In the year 1775 my opinion was asked concerning a family receipt for the cure of the dropsy. I was told that it had long been kept a secret by an old woman in Shropshire, who had sometimes made cures after the more regular practitioners had failed. I was informed also, that the effects produced were violent vomiting and purging; for the diuretic effects seemed to have been overlooked. This medicine was composed of twenty or more different herbs; but it was not very difficult for one conversant in these subjects, to perceive, that the active herb could be no other than the Foxglove.”
– William Withering, 1785, [3]

The Son of an Apothecary

William Withering’s was born in Wellington, Shropshire, UK, the son of a surgeon. Withering began his studies at the University of Edinburgh in 1762 which included a large medical curriculum as well. Withering was back then not interested in botany too much and he wrote his thesis on malignant sore throat, titled De Angina Gangraenosa. Withering later moved to Stafford where he also attended private patients and served as a founding physician of the Stafford General Infirmary.

It is believed that in Stafford, Withering started to enjoy botany. Further he met his  wife, Helena Cookes, who sketched the plants he collected. Seeking a better income, Withering and his family moved to Birmingham in order to fill a position after the death of physician and Lunar Society cofounder William Small in 1775. The so called Lunar Society was a gathering of naturalists and inventors who frequently met to travel under the light of the full moon. In Birmingham William Withering began to work together with the fellow physician John Ash, and Withering also served as a founder of the Birmingham General Hospital. 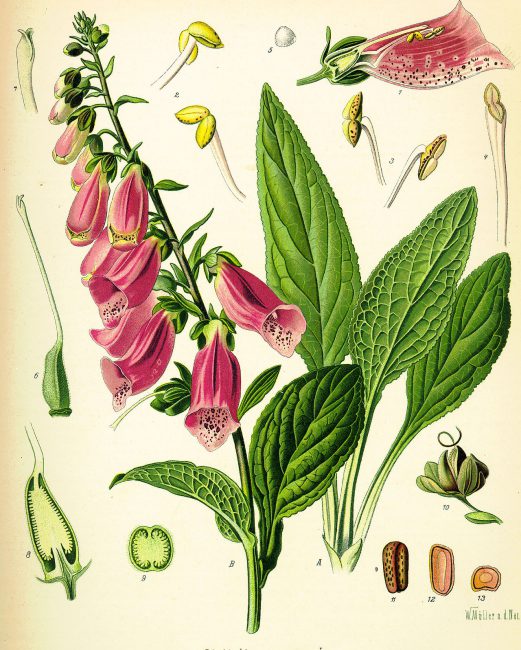 However, William Withering is probably best known for his 1785 publication An Account of the Foxglove, and Some of Its Medical Uses. Indeed foxglove, or Digitalis purpurea, had already been in use in folk medicine for several centuries. The generic epithet Digitalis is from the Latin digitus (finger). Leonhart Fuchs [5] first invented the name for this plant in his 1542 book De historia stirpium commentarii insignes, based upon the German vernacular name Fingerhut, which translates literally as ‘finger hat’, but actually means ‘thimble’. It is believed that Withering first learned of the use of Digitalis in treating “dropsy” from Mother Hutton, an old woman who practiced as a folk herbalist in Shropshire, who used the plant as part of a polyherbal formulation containing over 20 different ingredients to successfully treat this condition. Withering however intended to objectively demonstrate its efficiency in treating dropsy, the edematous bodily swelling that typically accompanied heart failure. Over the course of nine years, Withering tried out different preparations of various parts of the plant and documented 156 cases where he had employed digitalis. He further described the best and safest ways of using it and he realized that foxglove’s action varied according to the plant’s stage of bloom.

Even though Erasmus Darwin initially supported Withering in starting the position at Birmingham, the two faced several conflicts concerning plagiarism during Withering’s career. For instance, Erasmus Darwin claimed priority in having published on foxglove’s therapeutic use in managing dropsy and one year prior, Darwin along with fellow members of the Lichfield Botanical Society, had published the first English translation of Swedish naturalist and explorer Carolus Linnaeus’ Genera et Species Plantarum without acknowledging Withering’s contributions.[4]

The Clinical Distinction of Scarlet Fever

In his further career, William Withering also contributed to the clinical distinction of scarlet fever and to the medical use of lead and rum. In Portugal, he analyzed the mineral content of spa waters and prepared the English translation of Swedish chemist and naturalist Torbern Bergman’s mineralogy treatise in the 1780s. The flowering plant Witheringia solanacea (order Solanales) was named in his honour.

in 1783 Withering diagnosed himself as having pulmonary tuberculosis and went twice to Portugal hoping the better winter climate would improve his health; it did not. On the way home from his second trip there, the ship he was in was chased by pirates. In 1785 he was elected a Fellow of the prestigious Royal Society. He was also one of the members of the Lunar Society,  a dinner club and informal learned society of prominent figures in the Midlands Enlightenment, including industrialists, natural philosophers and intellectuals, who met regularly between 1765 and 1813 in Birmingham. During the Birmingham riots of 1791 he prepared to flee from his home in Edgbaston Hall, but his staff kept the rioters at bay until the military arrived. In 1799 he decided that he could not tolerate another winter in the cold and draughty Hall, so he bought “The Larches” in the nearby Sparkbrook area. However, it did not work out, William Withering died on 6 October 1799.