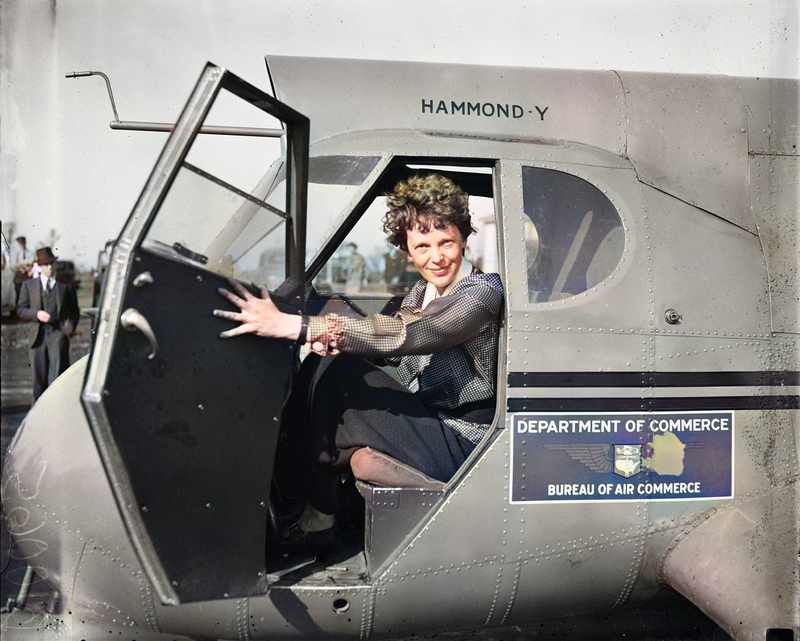 On January 11, 1935, American aviatrix Amelia Earhart became the first person to fly solo from Honolulu, Hawaii to Oakland, California across the Pacific ocean.

“Please know I am quite aware of the hazards. I want to do it because I want to do it. Women must try to do things as men have tried. When they fail, their failure must be but a challenge to others.”
— Amelia Earhart, 1937 [1]

Amelia Earhart was born on July 24, 1897, in Atchison, Kansas. She was the daughter of the German-American lawyer Samuel “Edwin” Stanton Earhart (1868-1930) and his wife Amelia “Amy” Otis (1869-1962). The first contact Earhart made with aviation was when she was 10-years old and visiting a plane state fair, but she was not quite impressed. A few years later, she visited a stunt-flying exhibition and after pilot Frank Hawks gave her a short ride on his plane she knew she had to fly herself. Unfortunately, due to societal conventions it was unthinkable, that a woman in the early 20th century would learn how to fly. But the strong minded tomboy who kept various articles concerning successful women in male-oriented fields, somehow managed it to find her mother‘s support and attended her first flying lessons on January 3, 1921. Only six months later, she bought her first plane which she used for to set her record by rising up to an altitude of 4.2 kilometers.

The First Woman to Fly Across the Atlantic

In April 1928, Amelia Earhart received a phone call, suggesting her to be the first woman, flying across the Atlantic Ocean. It was a dangerous adventure, since three women in just one year died while attempting this achievement. But fortunately, the plane ‘Friendship‘ and its crew consisting of Earhart, pilot, Wilmer Stultz and co-pilot Louis Gordon arrived safely at Burry Port, Wales after 21 hours and Amelia Earhart was to be known world wide. But this was still not enough for the challenge seeking aviatrix.

In 1929 she took part in the first Cleveland Women’s Air Derby (called “Powder Puff Derby“), an overland competition for female pilots only. It was financially and morally supported by the New York publisher George Palmer Putnam. As a result of the devastating reactions of the press to the race, Amelia Earhart met four other well-known female pilots in autumn 1929. Together they founded the Ninety Nines Club with the aim of strengthening the position of women in aviation.

Amelia Earhart wanted to cross the Atlantic by herself and did so on May 20, 1932, only five years after Charles Lindbergh.[6] President Herbert Hoover awarded her with the gold medal from the National Geographic Society and Earhart turned into a heroic figure and role model for all women in Europe and the United States. Due to bad weather and technical problems it did not reach Paris, but had to make an emergency landing near Londonderry (Northern Ireland). For this flight, which also made her the first human to cross the Atlantic twice, President Herbert C. Hoover honored her with the Gold Medal of the National Geographic Society. She was also the first woman to be awarded the Distinguished Flying Cross. In the following years, Earhart continued breaking several records like setting a new altitude record, flying solo from Honululu to Oakland, California on January 11, 1935 or flying solo from Mexico City to Newark the year after. [1]

Amelia Earhart, who set numerous records, an iconic figure of flight who demonstrated possibilities to women trying to achieve more than they thought they could ever do, began to plan her final and most risky flight: surrounding the entire world. Earhart and her navigator Fred Noonan departed from Miami and landed in New Guinea at the end of June, having 11,265 km completed. The next stop was the small ‘Howland Island‘ in the Pacific. This landing was quite challenging, because Noonan had to fight the inaccurate maps, but due to the help of the U.S. Coast Guards they eventually made it to the island safely. On July 2, the crew took off going though cloudy and stormy weathers. The U.S. coast guard ship Itasca tried to help them through the weathers but after some hours of communication with the helping ship, they lost contact and nothing was heard from Amelia Earhart ever again. Immediately, rescuing attempts and wide range searches were made, but the brave pilot and her navigator were not found. [2] Shortly after their last radio message, a large search operation was initiated by the US government: 64 aircraft and eight warships were involved in the search, the largest in the history of aviation to date. Amelia Earhart has been declared missing, presumed dead. In 1938 a lighthouse was built on Howland Island in her honor, which was given the name Amelia Earhart Light. 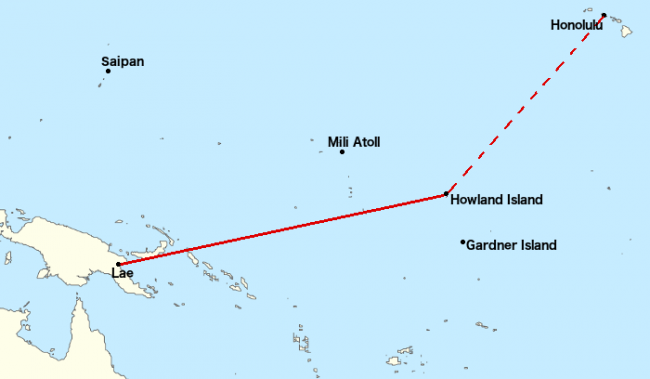 Earhart’s flight was intended to be from Lae Airfield to Howland Island, a trip of 2,556 miles (2,200 nmi; 4,100 km). This leg was the longest of the planned flight, the length was close to the maximum range of the plane, and the destination was a small island in a large ocean.

There are numerous theories about Earhart’s disappearing, since neither her body, nor the body of her navigator were found, not even the plane has ever been spotted. Specialists assume, that the plane went down in the Pacific Ocean and sunk due to her lack of fuel. But indeed there are hints that they landed on the uninhabited ‘Gardener Island’, where a woman’s shoe as well as an empty sextant box and a human skeleton were found. In the years 1998 and 2007, more items that were possible to have belonged to the crew were found, but this could never be proven. [3, 4]

Amelia Earhart stays in people’s minds for her contributions in the field of aviation and for her political engagement for peace and women‘s rights. In a last letter, she wrote to her husband in case of a deadly accident, she said: “Please know I am quite aware of the hazards. I want to do it because I want to do it. Women must try to do things as men have tried. When they fail, their failure must be but a challenge to others.” [1] Earhart’s accomplishments in aviation inspired a generation of female aviators, including the more than 1,000 women pilots of the Women Airforce Service Pilots (WASP) who ferried military aircraft, towed gliders, flew target practice aircraft, and served as transport pilots during World War II.[7]