You are here: Home › engineering › Ferdinand Berthoud and the Chronometer 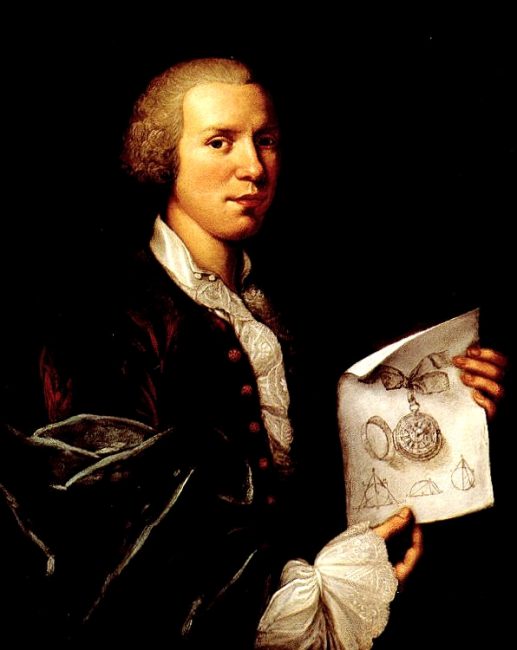 On March 19 1727, French horologist Ferdinand Berthoud was born. Together with his great rival, Pierre Le Roy, Berthoud contributed to the development of the chronometer in the attempt to solve the problem of determining longitude at sea. Berthoud‘s improvements to the chronometer have been largely retained in present-day designs.

Ferdinand Berthoud was born in in Plancemont, Val-de-Travers, in the Canton of Neuchâtel, which then belonged to the Kingdom of Prussia (today Switzerland), into a distinguished family of watch and clock makers. In 1741, when he was fourteen, Ferdinand Berthoud became clockmaking apprentice to his brother Jean-Henry in Couvet, at the same time receiving a sound scientific education. It is believed that he moved to Paris at the age of 18. There, it is believed that he entered the workshop of Julien Le Roy, an influential clockmaker and watchmaker. Berthoud early earned a reputation for his for technical competence. On December 4, 1753, by order of the French Royal Council, in an exception to guild rules and by special favour of the King, Ferdinand Berthoud became a master at the tender age of 26, receiving the official title of Master Watchmaker.

Working with Diderot and d’Alembert

He was entrusted with writing several reference articles on horology for the “Methodical Encyclopaedia” published between 1751 and 1772 under the supervision of Diderot [7] and d’Alembert.[3] Berthoud’s first book was published in 1759 and was titled L’art de conduire et de régler les pendules et les montres, à l’usage de ceux qui n’ont aucune connaissance d’horlogerie (The art of operating and adjusting clocks and watches for those who have no horological knowledge). His work proved to be quite successful and was translated in several languages.

In 1763, Ferdinand Berthoud was appointed by the King to inspect the H4 sea watch made by Sir John Harrison (1693-1776) in London, in the company of mathematician Charles-Etienne Camus, a member of the French Royal Academy of Sciences, and astronomer Joseph-Jérôme Lefrancois de LaLande [4]. It was a disappointing trip for Berthoud: Harrison only showed him his H1, H2, and H3 watches (in exchange for a payment of £500), categorically refusing to show him the legendary H4, the most advanced of them all. However, due to his respectable reputation he was elected on February 16, 1764 as an “associate foreign member” of the Royal Society in London.

The Famous Marine Chronometer No. 1

Ferdinand Berthoud completed the construction of his famous Marine Chronometer No. 1 already in 1761 and published the Mémoire sur les principes de construction d’une Horloge de Marine (Dissertation on the construction principles of a marine chronometer) one year prior. Berthoud made his marine clocks in order to calculate longitude at sea. In 1764 and by the order of the King, the Academy appointed Duhamel du Monceau and Abbot Chappe d’Auteroche to testing Berthoud’s Marine Chronometer No. 3 at sea. Ferdinand Berthoud accompanied both, setting off from Brest aboard the corvette L’Hirondelle on October 7 that year. Unfortunately, the mission report, read by Abbot Chappe d’Auteroche to the Academy on November 14, was never published. In his Traité des horloges marines (Treatise on marine chronometers), Berthoud insinuates that this omission was due to Duhamel du Monceau whose nephew, Fougeroux de Grandlieu, having served as lieutenant during this expedition, died several days after the ship’s return. 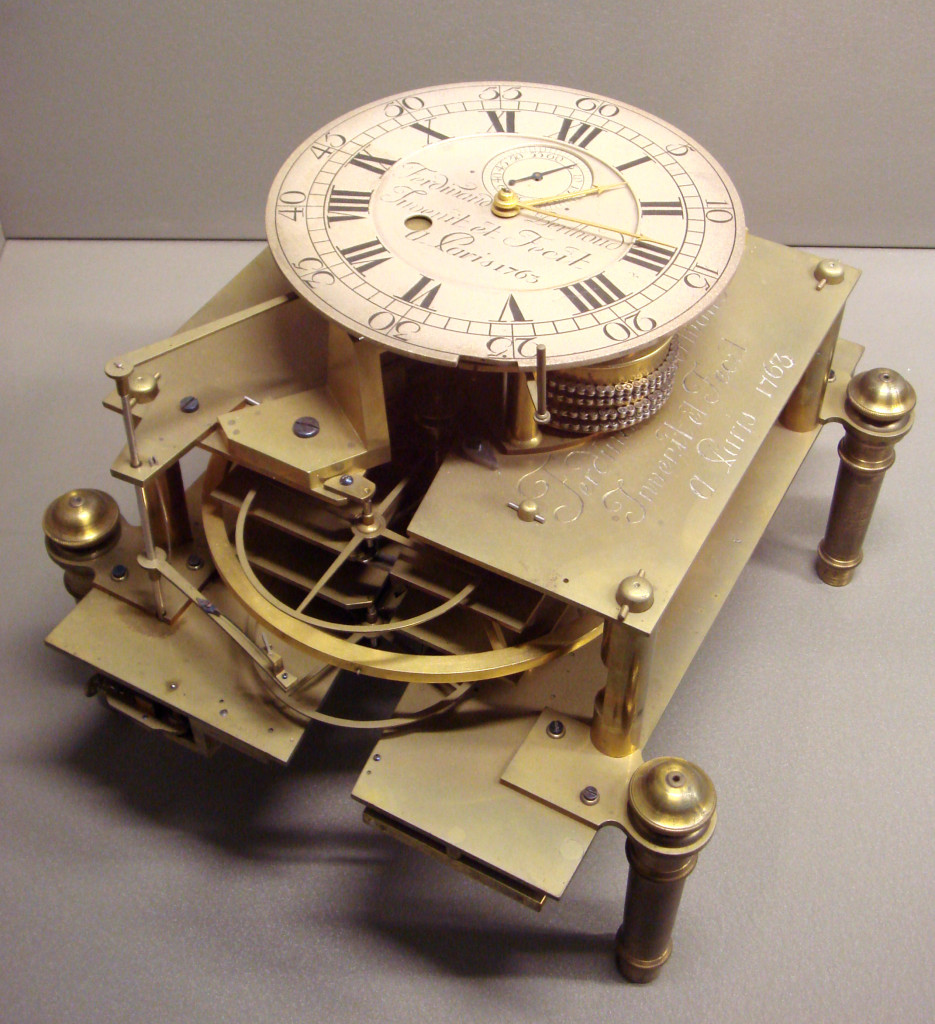 To check the performance of the new sea watches, on November 3, 1768, the Duke of Praslin gave Sea Clocks numbers 6 and 8 to Charles-Pierre Claret, the ‘Knight of Fleurieu’, explorer, hydrographer, and King’s lieutenant, accompanied by Canon Pingré, navy astronomer and geographer and member of France’s Royal Academy of Sciences. Their mission was to test the watches on the corvette Isis during a voyage from Rochefort to Santo Domingo and back. The voyage lasted ten months and the trials on the clocks were successful. The findings of Charles-Pierre Claret were published in 1773 under the title Voyage fait par ordre du roi, pour éprouver les horloges marines. 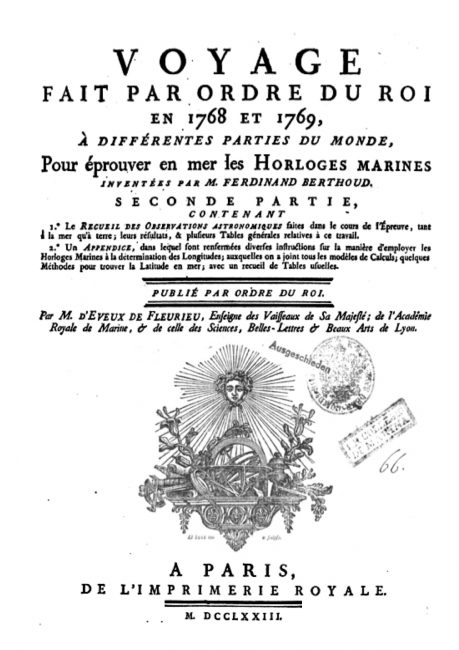 Title page. Voyage made by order of the king in 1768 and 1769 to different parts of the world to test at sea the marine clocks invented by Mr. Ferdinand Berthoud.

In 1770, Ferdinand Berthoud was appointed Horloger du roi (Horologist-Mechani). Ferdinand Berthoud is regarded as one of the inventors of the marine chronometer that served to determine longitude at sea necessary to navigation. On August 1, 1785, Ferdinand Berthoud gave five clocks to the captain of the Astrolabe, Count de La Pérouse,[5] as he was leaving on an expedition around the world with the aim of adding to the discoveries of James Cook in the Pacific Ocean. The clocks taken on board were lost at sea in the tragic wreck of the Astrolabe in 1788 off the coast of the Santa Cruz Islands, near the Solomon Islands.

In 1795, Ferdinand Berthoud was elected First Class Resident Member of the Mechanical Arts section of France’s National Institute (Institut de France). Following the French Revolution, Berthoud moved in to the Louvre and received an allowance from the State, continuing to work on his clocks and maintain sea clocks.  On July 17, 1804, Napoleon bestowed the title of Knight of the Legion of Honour on Ferdinand Berthoud as a member of the Institute.

On June 20, 1807, Ferdinand Berthoud died near Montmorency (Val-d’Oise) near Paris, at the age of 80, and was buried in Groslay (Val-d’Oise), where his bust has been located since 1907 in the Place Ferdinand Berthoud 15. In 1807, the year of his death, Berthoud published his final work, entitled Supplément au Traité des montres à Longitudes avec appendice contenant la notice ou indication des principales recherches ou des travaux faits par Ferdinand Berthoud sur divers parties des machines qui mesurent le temps depuis 1752 à 1807 (Supplement to the Traité des montres à Longitudes with appendix containing the notice or indication of the main researches or works done by Ferdinand Berthoud on various parts of the machines which measure the time since 1752 to 1807). Ferdinand Berthoud left behind him an extraordinary output in a variety of fields: sea chronometers, watches and decorative clocks, specialist tools, and scientific measurement instruments, as well as publishing scores of written works and specialist dissertations, totalling over 4,000 pages and 120 copperplates.

‘
Determining Latitude and Longitude from the Sun, [10]