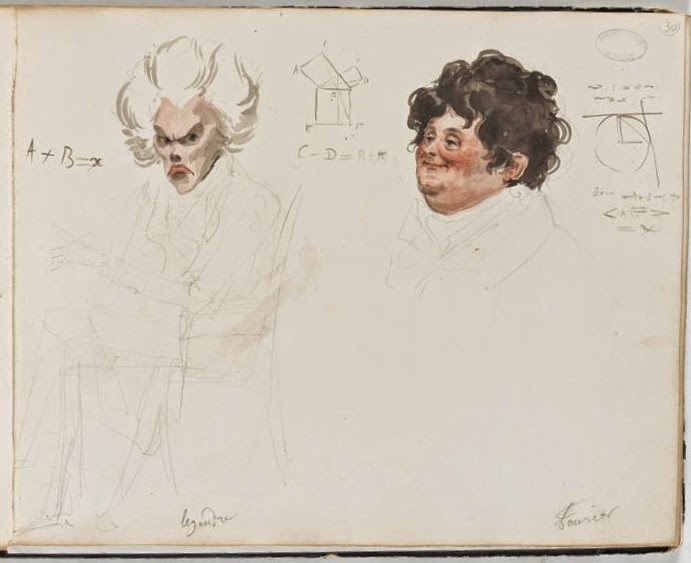 On September 18, 1752, French mathematician Adrien-Marie Legendre was born. He is best known for his contributions in number theory, celestial mechanics and elliptic functions. It was in a paper on celestial mechanics concerning the motion of planets (1784) that he first introduced the Legendre Polynomials. Moreover, he served as director of the of the Bureau des Longitudes, standardizing French weights and measures.

“All the truths of mathematics are linked to each other, and all means of discovering them are equally admissible.”
— Adrien-Marie Legendre

Adrien-Marie Legendre was born in Paris to a pretty wealthy family. He was admitted to the Collège Mazarin in Paris, and defended his thesis in physics and mathematics in 1770. Since he was from a wealthy family, he then lived as a private scholar until the French Revolution, and it was only out of interest that he accepted an apprenticeship at the Paris Military Academy (École Militaire) from 1775 to 1780, recommended by d’Alembert.[8] In 1782, he won the prize of the Berlin Academy of Sciences for determining the trajectory of a projectile by taking into account air resistance, which brought him the attention of Lagrange,[9] who was then director of the Academy in Berlin. A paper submitted to the Paris Academy in January 1783 on the attraction of ellipsoids, in which he also introduced the Legendre polynomials, earned him recognition from the leading French astronomer and mathematician Pierre Simon de Laplace,[10] who saw to it that he became a corresponding member and in 1785 an associate member of the Académie des sciences. In 1785 he worked on elliptic integrals and in 1786 on number theory – he formulated the quadratic reciprocity law, which was already known to Leonhard Euler.[11]

In 1787, under Delambre and Méchain,[12] he was commissioned to measure the longitude between Dunkirk and Barcelona – the longitudes of the two places differ by only 13 angular minutes – by geodetic triangulation, also with the aim of obtaining basic data for determining the metre. They worked together with the observatory in Greenwich and also carried out a triangulation from Greenwich to Paris.The paper Exposé des operations, faites en France en 1787 (Statement of operations, made in France in 1787) reports on the results. In 1789 he was elected a Fellow of the Royal Society. From 1799 to 1815, Legendre served as mathematics examiner for graduating artillery students at the École Militaire and was made an officer of the Légion d’Honneur.  In 1791 he became a member of the Commission for the Reorganization of Weights and Measures (Metric Commission). From 1792 onwards, he was involved with Gaspard de Prony and other mathematicians such as Lazare Carnot in an extensive project to create mathematical tables (logarithmic tables).[13]

During the French Revolution he lost his property and had to look for employment. During the time of terror he even had to hide for some time. In 1793 he married Marguerite-Claudine Cohin. In 1794 the first edition of his textbook of geometry was published, which was very influential for mathematical instruction not only in France but also, for example, in the USA in the 19th century and had many editions. From 1795 he taught at the École normale supérieure. In 1808 he was appointed lifelong head of the university, in 1815 honorary member of the commission for public education and in 1816 examiner at the École polytechnique as successor to Laplace. In 1812 he replaced Lagrange at the Bureau des Longitudes. In 1820 he was elected a fellow of the Royal Society of Edinburgh[2] and in 1832 he was elected to the American Academy of Arts and Sciences. After he had fallen out with the government – in 1824 he refused to give his approval to a candidate for the Institut de France proposed by the government – he was stripped of his pension. He became impoverished and died in Paris in 1833.

Legendre made important contributions in the most diverse fields of mathematics, but even during his lifetime he was overshadowed by those of Carl Friedrich Gauss, 25 years his junior, who worked in strange parallelism in almost all fields on the same objects as Legendre, but always penetrated deeper. Legendre developed the least squares method, which has broad application in linear regression, signal processing, statistics, and curve fitting. This work was published in 1806 as part of his book On the paths of comets. Legendre acknowledged Gauss’ contributions and took them into account in the heavily revised second edition of his number theory of 1808, but at the same time complained bitterly that, conversely, Gauss claimed all priorities for himself. Legendre conjectured the quadratic reciprocity law which was subsequently proved by Gauss [4] and he pioneered with several works on the distribution of primes, and on the application of analysis to number theory.

In calculus, Legendre is known not only for his Legendre polynomials in potential theory, but also for his work on elliptic integrals, where his division into three “genera” is named after him. In 1830 he gave a proof of Fermat‘s last theorem for exponent n = 5, which was also proven by Lejeune Dirichlet two years earlier. His 1798 conjecture of the Prime number theorem was rigorously proved by Hadamard and de la Vallée-Poussin in 1896. The scientist became known for the Legendre transformation, which is used to go from the Lagrangian to the Hamiltonian formulation of classical mechanics. In thermodynamics it is also used to obtain the enthalpy and the Helmholtz and Gibbs energies from the internal energy. His best known work remains Éléments de géométrie which was published in 1794 and was the leading elementary text on the topic for around 100 years.

From One to Many Geometries – Professor Raymond Flood, [15]