You are here: Home › astronomy › John Goodricke and the Variable Star of Beta Persei 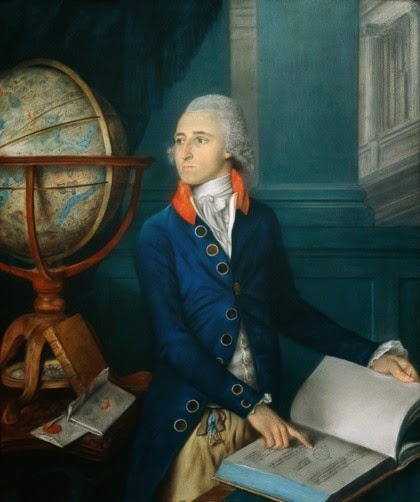 On September 17, 1764, English amateur astronomer John Goodricke was born. He is best known for his observations of the variable star Algol (Beta Persei) in 1782. He was also first to correctly propose that the distant sun is periodically occulted by a dark body.

Not much is known about John Goodricke. Clear is only that the astronomer was deaf and passed away very early at the age of only 21. He was the son of a British diplomat and a dutch merchant daughter. At the age of 5, Goodricke lost his hearing abilities as a result of scarlet fever, but after a decent education he was able to read lips and to speak. In order to achieve this, Goodricke was sent to a special school in Edinburgh. When he was 13, the young Goodricke was able to attend a regular school near York and school reports describe Goodricke as “a very tolerable classic and an excellent mathematician“. Goodricke‘s notebooks from Warrington reveal that he was already observing the sky at the age of 15. [1,2]

His motivation to start studying astronomy came from his tutor William Enfield. However, most of his observations were performed along with his cousin and mentor Edward Pigott. Together they discovered and measured the variation of light from stars that would years later, in the 20th Century, enable astronomers to determine distances to distant galaxies. According to Goodricke‘s observations, it is believed that he was the first to calculate the period of Algol to 68 hours and 50 minutes, where the star was changing its brightness by more than a magnitude as seen from Earth. [1]

The astronomer reported his observations in 1783 at the British Royal Society, and he proposed two theories in order to explain his findings. The first was that the distant sun is periodically occulted by a dark body, or that the star itself has a darker region which is directing to Earth periodically because of the star rotation. For his part in this work, the Royal Society of London awarded Goodricke the Copley Medal, its highest honour, at the age of 19. He remains the youngest recipient of the award. [1,2]

At yovisto, you may be interested in a video lecture on Exploding Stars by Prof. Dr. Alex Filippenko at the University of Berkeley.