You are here: Home › history › Cardinal Richelieu and the Académie Francaise 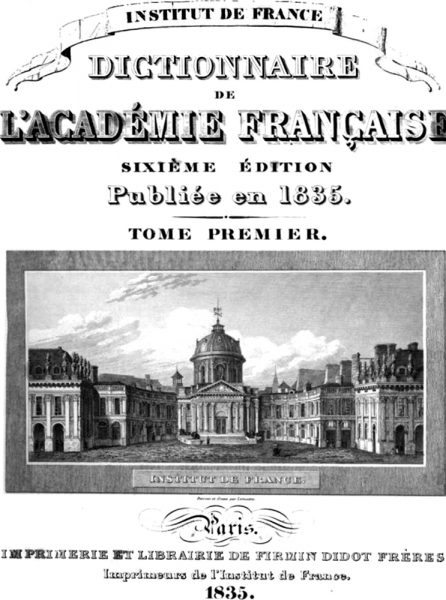 On February 22, 1635, on the urging of Cardinal Richelieu, the chief minister of France, King Louis XIII of France, formally established the Académie française, the French academy. It is the pre-eminent French council for matters pertaining to the French language. The Académie consists of forty members, known informally as “les immortels” (the immortals). The body has the task of acting as an official authority on the language; it is charged with publishing an official dictionary of the language. Its rulings, however, are only advisory, not binding on either the public or the government.

For sure, you have heard of Cardinal de Richelieu, the chief minister of France under King Louis XIII, whose most important effort was the restraining of the power of the French nobility and thereby the transformation of France into a strong, centralized state. Cultural philosopher Egon Friedell once characterized him in the following way:

“This great and unworthy, imaginative and witty state leader, who united in himself not only all the admirable and abominable qualities of an eminent politician, but also all the radiant merits and ugly vices of his race, is considered the actual founder of Bourbon absolutism, and indeed: He created most of the impressive building which the ingenious, unhappy Henry the Fourth had begun and which the more happy than ingenious Louis the Fourteenth only needed to complete.” (Egon Friedell, Cultural History of Modern Times)

However, at least you might know him as one of the key figures in Alexandre Dumas‘ famous Musketeer novels.[5] One of his lesser known efforts was the institution of the Académie française, the pre-eminent French council for matters pertaining to the French language.

A League of Learned Gentlemen

Originally, the Académie had its origins in an informal literary group deriving from the salons held at the Hôtel de Rambouillet during the late 1620s and early 1630s. For several years a number of learned gentlemen, such as Godeau, de Gombeaud, Giry, Chaplain, Habert, de Serizay, and the Abbé Cerisy de Malleville, had met once a week at Valentin Conrart‘s house for the purpose of discussing literary subjects. Through the Abbé de Boisrobert the existence of this society became known to Cardinal de Richelieu, the chief minister of France, who conceived the idea of making it a national institution and installing himself as protector.[2] In anticipation of the formal creation of the academy, new members were appointed in 1634. Then, on 22 February 1635, at Richelieu’s urging, King Louis XIII granted letters patent formally establishing the council. According to the letters patent registered at the Parlement de Paris on 10 July 1637, the Académie française was “to labor with all the care and diligence possible, to give exact rules to our language, to render it capable of treating the arts and sciences“. The Académie française has remained responsible for the regulation of French grammar, spelling, and literature. The number of its members was fixed at forty, and statutes were drawn up which have suffered scarcely any change since that time.[2]

Eliminating the Impurity of Language

Richelieu’s model, the first academy devoted to eliminating the “impurities” of a language, was the Accademia della Crusca, founded in Florence in 1582, which formalized the already dominant position of the Tuscan dialect of Florence as the model for Italian; the Florentine academy had published its Vocabolario in 1612.

From the French Revolution to the Restauration

During the French Revolution, the National Convention suppressed all royal academies, including the Académie française. In 1792, the election of new members to replace those who died was prohibited and in 1793, the academies were themselves abolished. They were all replaced in 1795 by a single body called the Institut de France, or Institute of France. Napoleon Bonaparte, as First Consul, decided to restore the former academies, but only as “classes” or divisions of the Institut de France. The second class of the Institut was responsible for the French language, and corresponded to the former Académie française. When King Louis XVIII came to the throne in 1816, each class regained the title of “Académie” again.

The President of France is the “protector” or patron of the Académie with Cardinal Richelieu as the first to adopt this role. Upon his death in 1642, Pierre Séguier, the Chancellor of France, succeeded him. King Louis XIV adopted the function when Séguier died in 1672; since then, the French head of state has always served as the Académie’s protector. The Académie consists of forty members, known informally as les immortels (the immortals), because of the motto, À l’immortalité (“To Immortality”), that is on the official seal of the charter granted by Cardinal Richelieu. New members are elected by the members of the Académie itself. Academicians hold office for life, but they may resign or be dismissed for misconduct. One of the Immortels is chosen by his or her colleagues to be the Académie’s Perpetual Secretary. The Secretary is called “Perpetual” because the holder serves for life, although he or she may resign, and may thereafter be styled as Honorary Perpetual Secretary.

Members remain in the Académie for life. However, the council may dismiss an academician for grave misconduct. The first dismissal occurred in 1638, when Auger de Moléon de Granier was expelled for theft. The most recent dismissals occurred at the end of World War II: Philippe Pétain, Abel Bonnard, Abel Hermant, and Charles Maurras were all excluded for their association with the Vichy regime. In total, twenty members have been expelled from the Académie. Many notable French writers have not become members of the Académie française. On the other hand, there are many notable French authors who never became academicians including Jean-Jacques Rousseau,[6] Jean-Paul Sartre,[7] Honoré de Balzac, [8] René Descartes,[9]  Denis Diderot, Charles Baudelaire, Gustave Flaubert, Molière, Marcel Proust, Jules Verne, and Émile Zola. Among the distinguished men who held seats in the Academie are the following: Corneille, Racine, La Bruyère, Bossuet, Chateaubriand, Lamartine, de Tocqueville, Ampère, or Pasteur.

The Académie is France’s official authority on the usages, vocabulary, and grammar of the French language. In this role, the academie publishes a dictionary of the French language, known as the Dictionnaire de l’Académie française, which is regarded as official in France. Furthermore it originally also proposed to compile a grammar, a treatise on rhetoric, and a treatise on poetics. The office of the Academy is not to create but to register words approved by the authority of the best writers and by good society.[2]

As the use of English language terms by media increased over the years, the Académie has tried to prevent the Anglicization of the French language. For example, the Académie has recommended to avoid loanwords from modern English (such as walkman, computer, software and e-mail), in favour of neologisms, i.e. newly coined French words derived from existing ones (baladeur, ordinateur, logiciel, and courriel respectively, the first three being at present well-established words of the French language).

Inside the Académie Française: Becoming an ‘Immortal’, [11]