You are here: Home › astronomy › Carl Friedrich Gauss – The Prince of Mathematicians 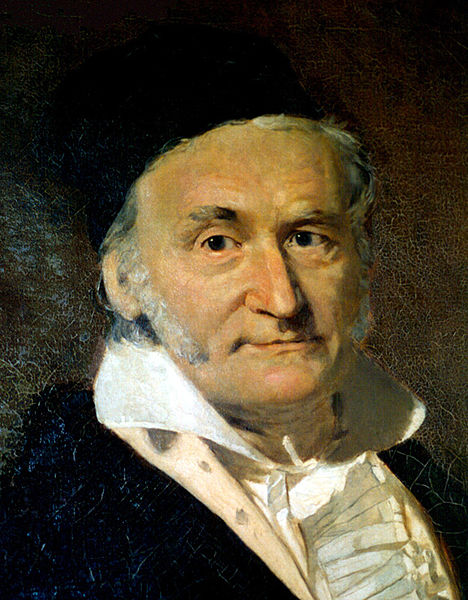 On April 30, 1777, German mathematician and physical scientist Carl Friedrich Gauss was born. He contributed significantly to many fields, including number theory, algebra, statistics, analysis, differential geometry, geodesy, geophysics, electrostatics, astronomy and optics. He is often referred to as Princeps mathematicorum (Latin, “the Prince of Mathematicians”) as well as “greatest mathematician since antiquity”.

Carl Friedrich Gauss grew up as an only child, his mother could barely read but was known to be incredibly intelligent. Rumors about Gauss say that he could calculate before being able to speak and that he corrected his father on his wage accounting at the age of only three. No matter if these rumors are actually true, it indicates that Gauss’ talents and his love for complex calculations were detected very early. At the age of seven, he started to attend school and already designed formulas to easen his calculations during math class.

There is one famous telling about Carl Friedrich Gauss’s boyhood discovery of the “trick” for summing an arithmetic progression. The event occurred when Gauss was seven and attended the Katharina-school in Brunswick. The teacher, one Büttner, had set the class the task of calculating the sum 1 + 2 + 3 + …. + 100 – probably to get a bit of peace for himself, with instructions that each should place his slate on a table as soon as he had completed the task. Almost immediately Gauss placed his slate on the table, saying, “There it is.” The teacher looked at him scornfully while the others worked diligently. When the instructor finally looked at the results, the slate of Gauss was the only one to have the correct answer, 5050, with no further calculation. The ten-year-old boy evidently had computed mentally the sum of the arithmetic progression 1 + 2 + 3 + … + 99 + 100, presumably through the formula m(m+1)/2. His teachers soon called Gauss’ talent to the attention of the Duke of Brunswick [1].

Mathematics as a Career

At the age of 14, Gauss was introduced to Duke Karl Wilhelm Ferdinand von Braunschweig, who sent him to the Collegium Carolinum (now Braunschweig University of Technology), which he attended from 1792 to 1795, and to the University of Göttingen from 1795 to 1798. While at university, Gauss independently rediscovered several important theorems. His breakthrough occurred in 1796 when he showed that a regular polygon can be constructed by compass and straightedge if the number of its sides is the product of distinct Fermat primes and a power of 2. This was a major discovery in an important field of mathematics; construction problems had occupied mathematicians since the days of the Ancient Greeks, and the discovery ultimately led Gauss to choose mathematics instead of philology as a career. Gauss was so pleased with this result that he requested that a regular heptadecagon be inscribed on his tombstone. The stonemason declined, stating that the difficult construction would essentially look like a circle.

“The enchanting charms of this sublime science reveal themselves in all their beauty only to those who have the courage to go deeply into it.”
— Gauss in a letter to Sophie Germain (30 April 1807)

Gauss returned to Brunswick where he received a degree in 1799. After the Duke of Brunswick had agreed to continue Gauss’s stipend, he requested that Gauss submit a doctoral dissertation to the University of Helmstedt. He already knew Pfaff, who was chosen to be his advisor. Gauss’s dissertation was a discussion of the fundamental theorem of algebra. With his stipend to support him, Gauss did not need to find a job so devoted himself to research. He published the book Disquisitiones Arithmeticae in the summer of 1801 with a special section dedicated to number theory.[7] In the following years, Carl Friedrich Gauss was offered several positions at foreign universities, but in loyalty to the Duke and the hope of getting his own observatory he stayed in Göttingen, where he had to give lectures. Despite the fact that he did not enjoy his teacher occupation, several famous future mathematicians were taught by him, like Richard Dedekind or Bernhard Riemann. [8,9]

Gauss’ contributions to the field of mathematics are numerous. At the age of only 16, he made first attempts leading to non-Eucleidean geometry. Two years later, Gauss began researching on properties of the distribution of prime numbers, which later on led him to calculate areas underneath graphs and to the Gaussian bell curve. Independent of Caspar Wessel and Jean-Robert Argand, Gauss found the geometrical expression of complex numbers in one plane.

Predicting the Position of Lost Ceres 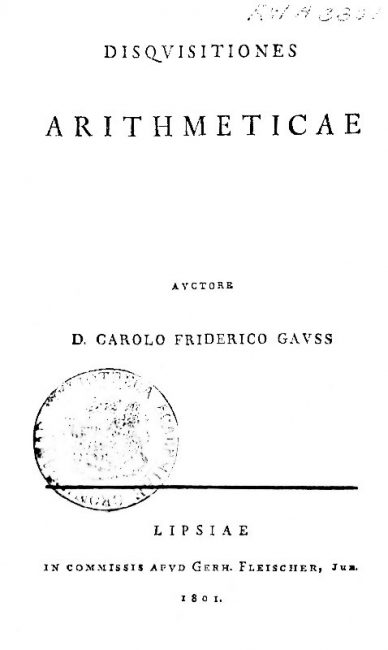 In June 1801, Zach, an astronomer whom Gauss had come to know two or three years previously, published the orbital positions of Ceres, a new “small planet” which was discovered by Giuseppe Piazzi, an Italian astronomer on 1 January, 1801.[10] Unfortunately, Piazzi had only been able to observe 9 degrees of its orbit before it disappeared behind the Sun. Zach published several predictions of its position, including one by Gauss which differed greatly from the others. When Ceres was rediscovered by Zach on 7 December 1801 it was almost exactly where Gauss had predicted.[7]

“It may be true, that men, who are mere mathematicians, have certain specific shortcomings, but that is not the fault of mathematics, for it is equally true of every other exclusive occupation. So there are mere philologists, mere jurists, mere soldiers, mere merchants, etc. To such idle talk it might further be added: that whenever a certain exclusive occupation is coupled with specific shortcomings, it is likewise almost certainly divorced from certain other shortcomings.”
– Gauss-Schumacher Briefwechsel (1862)

At the age of 18, he discovered some properties of the prime number distribution and found the least squares method, which aims to minimize the sum of squares of deviations without first publishing anything about them. After Adrien-Marie Legendre published his “Méthode des moindres carrés” in a treatise in 1805 and Gauss only published his results in 1809, a dispute of priorities arose.

Gauss rejected an appointment to the Petersburg Academy of Sciences out of gratitude to his patron, the Duke of Braunschweig, and probably in the hope that he would build him an observatory in Braunschweig. After the sudden death of the Duke after the Battle of Jena and Auerstedt, Gauss became professor at the Georg August University of Göttingen and director of the observatory there in November 1807. There he had to hold courses, but he developed an aversion to them.

“I mean the word proof not in the sense of the lawyers, who set two half proofs equal to a whole one, but in the sense of a mathematician, where ½ proof = 0, and it is demanded for proof that every doubt becomes impossible.”
— Gauss in a letter to Heinrich Wilhelm Matthias Olbers (14 May 1826)

Gauss had been asked in 1818 to carry out a geodesic survey of the state of Hanover to link up with the existing Danish grid. Gauss was pleased to accept and took personal charge of the survey, making measurements during the day and reducing them at night, using his extraordinary mental capacity for calculations. Because of the survey, Gauss invented the heliotrope which worked by reflecting the Sun’s rays using a design of mirrors and a small telescope. However, inaccurate base lines were used for the survey and an unsatisfactory network of triangles.[7]

Gauss began working in the field of astronomy after finishing his famous ‘Disquisitiones Arithmeticae‘ and managed to calculate planetary orbits through his method of least squares. He shared his experiences in the work ‘Theoria motus corporum coelestium in sectionibus conicis solem ambientium. His achievements in this field made Gauss internationally famous and several of his astronomical methods are still in use today.

Electromagnetism and the Telegraph

Together with Wilhelm Eduard Weber Gauss worked in the field of magnetism starting in 1831. Together with Weber, Gauss invented the magnetometer, thus connecting his observatory with the Institute of Physics in 1833. He exchanged messages with Weber via electromagnetically influenced compass needles: the world’s first telegraph connection. Together with him he developed the CGS unit system, which was determined in 1881 at an international congress in Paris as the basis for electrotechnical units.

Gauss worked in many fields, but only published his results when he believed a theory was complete. As a result, he occasionally pointed out to colleagues that he had long proved this or that result, but had not yet presented it because of the incompleteness of the underlying theory or the lack of carelessness necessary for rapid work. Numerous mathematical methods and formulas carry Gauss’ name today and throughout his lifetime and beyond he earned himself the reputation as one of the most genius and productive mathematicians of all times.

He was still scientifically active towards the end of his life and gave lectures on the least squares method in 1850/51. Two of his most important students, Bernhard Riemann (who received his doctorate from Gauss in 1851 and impressed Gauss in 1854 with his habilitation lecture on the basics of Riemann geometry) and Richard Dedekind, were only at the end of his career. Gauss suffered in his last years from heart failure (diagnosed as dropsy) and insomnia. In June 1854 he travelled with his daughter Therese to the construction site of the railway line from Hanover to Göttingen, where the passing railway made the horses shy and overturned the carriage, the coachman was seriously injured, Gauss and his daughter remained unharmed. Gauss took part in the inauguration of the railway line on 31 July 1854, after which he was increasingly restricted to his house due to illness. He died on 23 February 1855 in Göttingen in his armchair.