You are here: Home › mathematics › Read Euler, he is the Master of us all… 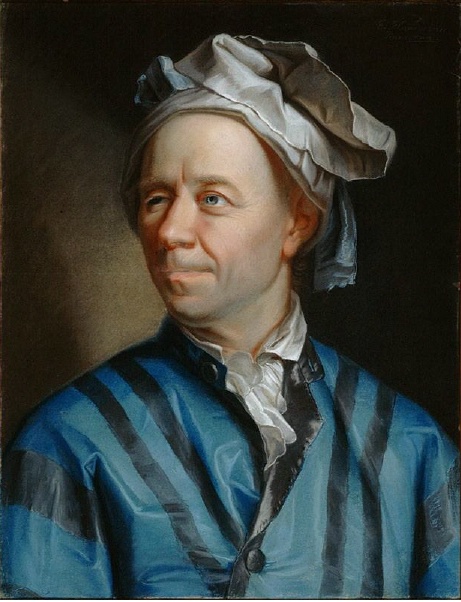 On September 18, 1783, Swiss mathematician and physicist Leonhard Euler passed away. Euler is considered to be the pre-eminent mathematician of the 18th century and one of the greatest mathematicians to have ever lived. He is also one of the most prolific mathematicians. He made important discoveries in fields as diverse as infinitesimal calculus and graph theory. He also introduced much of the modern mathematical terminology and notation, particularly for mathematical analysis, such as the notion of a mathematical function. A statement attributed to Pierre-Simon Laplace expresses Euler‘s influence on mathematics: “Read Euler, read Euler, he is the master of us all.“

“Mathematicians have tried in vain to this day to discover some order in the sequence of prime numbers, and we have reason to believe that it is a mystery into which the human mind will never penetrate.”
– Leonhard Euler

Leonhard Euler was born on April 15, 1707, in Basel, Switzerland, to Paul Euler, who had studied theology at the University of Basel and had attended the lectures of famous mathematician Jacob Bernoulli there. Thus, Paul Euler was able to teach his son elementary mathematics along with other subjects. Euler’s formal education started in Basel, where he was sent to live with his maternal grandmother. In 1720, at age thirteen, Euler enrolled at the University of Basel, and in 1723, he received a Master of Philosophy with a dissertation that compared the philosophies of Descartes and Newton. At that time, he was receiving Saturday afternoon lessons from Johann Bernoulli, then regarded as Europe’s foremost mathematician, who quickly discovered his new pupil’s incredible talent for mathematics. At that time Euler’s main studies included theology, Greek, and Hebrew at his father’s urging, in order to become a pastor, but Bernoulli convinced his father that Leonhard was destined to become a great mathematician.

In 1726, Euler completed a dissertation on the propagation of sound with the title De Sono. In 1727 he published another article on reciprocal trajectories and submitted an entry for the 1727 Grand Prize of the Paris Academy on the best arrangement of masts on a ship. But, the went to Pierre Bouguer,[7] an expert on mathematics relating to ships, who became known as “the father of naval architecture”. Nevertheless Euler’s essay won him second place which was a fine achievement for the young graduate. However, Euler later won this annual prize twelve times.

Euler now had to find himself an academic appointment and when Nicolaus Bernoulli died in St Petersburg in July 1726 creating a vacancy there, Euler was offered the post which would involve him in teaching applications of mathematics and mechanics to physiology.[1] Euler eagerly accepted the offer, but delayed making the trip to St Petersburg while he unsuccessfully applied for a physics professorship at the University of Basel. Euler arrived in St Petersburg on 17 May 1727. Daniel Bernoulli held the senior chair in mathematics at the Academy in St. Petersburg, which was originally founded by Peter the Great,[9] intended to improve education in Russia and to close the scientific gap with Western Europe. When Daniel Bernoulli left St Petersburg to return to Basel in 1733 it was Euler who was appointed to this senior chair of mathematics. In 1734, Euler married Katharina Gsell, the daughter of a painter from the St Petersburg Gymnasium. Katharina, like Euler, was from a Swiss family. They had 13 children altogether although only five survived their infancy. Euler claimed that he made some of his greatest mathematical discoveries while holding a baby in his arms with other children playing round his feet.[1] 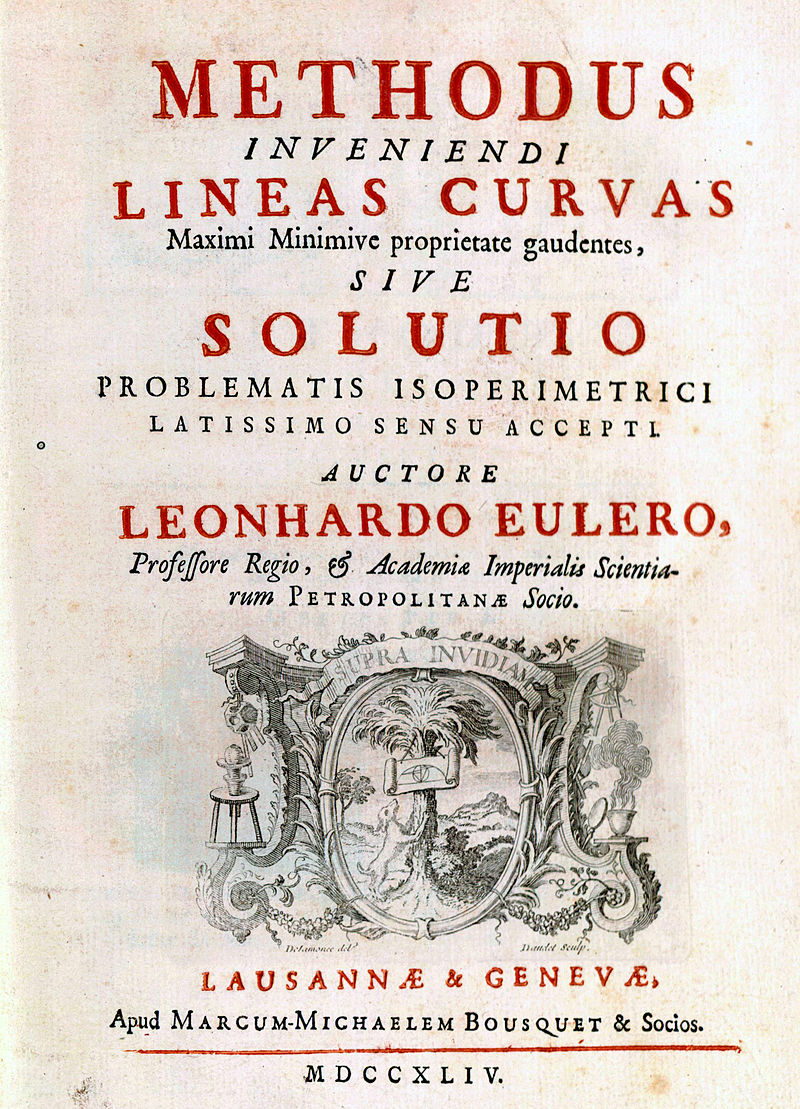 Euler’s health problems began in 1735 when he had a severe fever and almost lost his life. However, he kept this news from his family and friends in Basel until he had recovered. In his autobiographical writings Euler says that his eyesight problems began in 1738 with overstrain due to his cartographic work and that by 1740 he had alread lost the sight of one eye completely. In 1741 Euler moved to Berlin at the request, or rather command, of Frederick the Great. He lived for twenty-five years in Berlin, where he wrote over 380 articles. In Berlin, he published the two works for which he would become most renowned: The Introductio in analysin infinitorum (1748), a text on functions, and the Institutiones calculi differentialis (1755) on differential calculus.

Serving the Prussian King and the Academy

Euler undertook an unbelievable amount of work for the Academy: he supervised the observatory and the botanical gardens; selected the personnel; oversaw various financial matters; and, in particular, managed the publication of various calendars and geographical maps, the sale of which was a source of income for the Academy. Frederick the Great also charged Euler with practical problems, such as the project in 1749 of correcting the level of the Finow Canal or the supervision of the work on pumps and pipes of the hydraulic system at Sans Souci, the royal summer residence.[9] Despite Euler’s immense contribution to the Academy’s prestige, he eventually incurred the ire of Frederick and ended up having to leave Berlin. The Prussian king had a large circle of intellectuals in his court and he found the mathematician unsophisticated and ill-informed on matters beyond numbers and figures. Euler stayed in Berlin until 1766, when he returned to Russia, and was succeeded at Berlin by Lagrange.

Blindness and Most Productive Years

During his years in Berlin, Euler wrote books on the calculus of variations, on the calculation of planetary orbits, on artillery and ballistics, on analysis, on shipbuilding and navigation, on the motion of the moon, lectures on the differential calculus, and a popular scientific publication Letters to a Princess of Germany, which became rather famous. Euler developed a cataract in his left eye, which was discovered in 1766. Just a few weeks after its discovery, he was rendered almost totally blind. However, his condition appeared to have little effect on his productivity, as he compensated for it with his mental calculation skills and exceptional memory. For example, Euler could repeat the Aeneid of Virgil from beginning to end without hesitation, and for every page in the edition he could indicate which line was the first and which the last. With the aid of his scribes, Euler’s productivity on many areas of study actually increased. He produced on average, one mathematical paper every week in the year 1775. In 1771 his home was destroyed by fire and he was able to save only himself and his mathematical manuscripts.

In St. Petersburg on 18 September 1783, after a lunch with his family, Euler was discussing the newly discovered planet Uranus and its orbit with a fellow academician Anders Johan Lexell, when he collapsed from a brain hemorrhage and died shortly after. After his death the St Petersburg Academy continued to publish Euler’s unpublished work for nearly 50 more years.

Euler’s work in mathematics is so vast that here only a very superficial account of it can be given. He was the most prolific writer of mathematics of all time. He made large bounds forward in the study of modern analytic geometry and trigonometry where he was the first to consider sin, cos etc. as functions rather than as chords as Ptolemy had done. He made decisive and formative contributions to geometry, calculus and number theory. He integrated Leibniz’s differential calculus and Newton’s method of fluxions into mathematical analysis. He introduced beta and gamma functions, and integrating factors for differential equations. He studied continuum mechanics, lunar theory with Clairaut, the three body problem, elasticity, acoustics, the wave theory of light, hydraulics, and music. We owe to Euler the notation f (x) for a function (1734), e for the base of natural logarithms (1727), i for the square root of -1 (1777), π for pi, ∑ for summation (1755), the notation for finite differences Δy and Δ2y and many others.[1]

William Dunham, A Tribute to Euler, [8]