You are here: Home › engineering › Gaspard de Prony and the Prony Brake 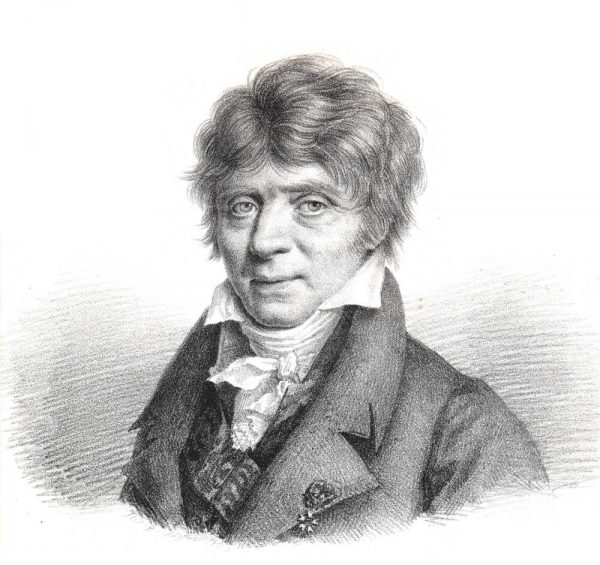 On July 22, 1755, French mathematician and hydraulic engineer Gaspard Clair François Marie Riche de Prony was born. De Prony is best known for his efforts in the mechanization of calculations as well as for his invention of the eponymous “brake” to measure the performance of machines and engines.

Mathematics vs a Legal Career

Gaspard de Prony’s family name was Riche, the de Prony title having been bought by his parents. De Prony was educated at the Benedictine College at Toissei in Doubs. Prony’s father, a prominent lawyer, wished his son to follow him into a legal career and had him trained in the classics. But after convincing his father and after spending more than a year studying mathematics, in 1776 Prony entered the École des Ponts et Chaussées, from which he graduated in 1779 as the top student and remained for a further year in Paris.[1,2]

On the Thrust of Arches

In 1780 he became an engineer with the École des Ponts et Chaussés and after three years in a number of different regions of France he returned to the École des Ponts et Chaussés in Paris 1783. He won the admiration of its director Jean Rondolphe Perronet [3], who in 1783 had Prony brought from the provinces to Paris to assist him. Prony’s defense of Perronet’s bridge at Neuilly led to his first memoir, On the thrust of arches (1783). and to friendship with mathematician Gaspard Monge [4], who personally initiated him in advanced analysis and descriptive geometry.

In 1785 de Prony visited England on a project to obtain an accurate measurement of the relative positions of the Greenwich Observatory and the Paris Observatory. In 1787 he was promoted to inspector at the École des Ponts et Chaussés. Further promotion in 1790 was followed the next year by his being appointed Engineer-in-Chief of the École des Ponts et Chaussés.[1] In 1791, de Prony embarked on the task of producing logarithmic and trigonometric tables for the French Cadastre. The effort was sanctioned by the French National Assembly, which, after the French Revolution wanted to bring uniformity to the multiple measurements and standards used throughout the nation. In particular, his tables were intended for precise land surveys, as part of a greater cadastre effort.

Dividing up the Labor

Inspired by Adam Smith‘s Wealth of Nations, de Prony divided up the labor into three levels, bragging that he “could manufacture logarithms as easily as one manufactures pins.”

A Lack of Funding

Due to a lack of funding from inflation following the French revolution, the tables were never published in full.By the turn of the 19th century, there was a shift in the meaning of calculation. The talented mathematicians and other intellectuals who produced creative and abstract ideas were regarded separately from those who were able to perform tedious and repetitive computations. Before the 19th century, calculation was regarded as a task for the academics, while afterwards, calculations were associated with unskilled laborers. This was accompanied by a shift in gender roles as well, as women, who were usually underrepresented in mathematics at the time, were hired to perform extensive computations for the tables as well as other computational government projects until the end of World War II. This shift in the interpretation of calculation was largely due to de Prony’s calculation project during the French Revolution.

Prony saw this entire system as a collection of human computers working together as a whole – a machine governed by hierarchical principles of the division of labor. One of de Prony’s important scientific inventions was the “brake” which he invented in 1821 to measure the performance of machines and engines. Essentially the measurement is made by wrapping a cord or belt around the output shaft of the engine and measuring the force transferred to the belt through friction. The friction is increased by tightening the belt until the frequency of rotation of the shaft is reduced. In practice more engine power can then be applied until the limit of the engine is reached.

The Reorganisation of France

In 1798 de Prony refused Napoleon’s request that he join his army of invasion to Egypt. Fourier, Monge and Malus had agreed to be part of the expeditionary force and Napoleon was angry that de Prony would not come. After Napoleon was defeated the reorganisation in France included a reorganisation of the École Polytechnique which was closed during 1816. De Prony lost his position as professor there and was not part of the reorganisation committee. However, as soon as the school reopened, de Prony was asked to be an examiner so he continued his connection yet only had to work one month per year.[1]

Prony also was first to propose using a reversible pendulum to measure gravity, which was independently invented in 1817 by Henry Kater and became known as the Kater’s pendulum. He also created a method of converting sinusoidal and exponential curves into a systems of linear equations. Prony estimation is used extensively in signal processing and finite element modeling of non linear materials.

Prony was a member, and eventually president, of the French Academy of Science. He was also elected a foreign member of the Royal Swedish Academy of Sciences in 1810. His name is one of the 72 names inscribed on the Eiffel Tower. Gaspard de Prony died in 1839, aged 84.

Construction and Working of Prony Brake Dynamometer – Theory of Machine, [7]