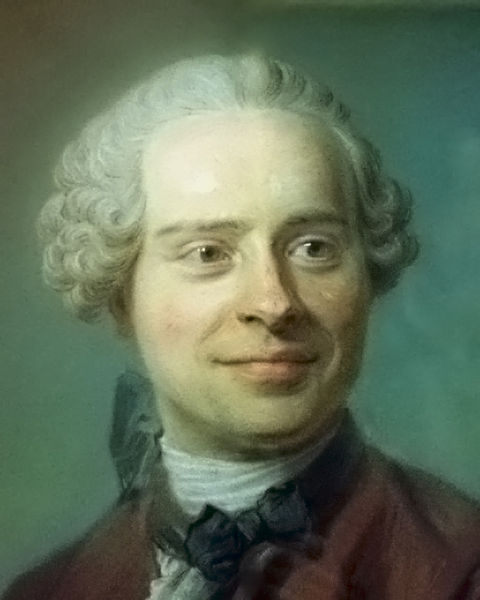 On November 16, 1717, French mathematician, mechanician, physicist, philosopher, and music theorist Jean Baptiste le Rond d’Alembert was born. He was one of the most important mathematicians and physicists of the 18th century and a philosopher of the Enlightenment.  Probably he is best known as co-editor with Denis Diderot of the famous Encyclopédie, edited between 1751 and 1772.[5]

“Nothing is more incontestable than the existence of our sensations; …”
— Jean Baptiste le Rond d’Alembert, in the Discours préliminaire de l’Encyclopédie (1759)

D’Alembert was the illegitimate son of Duc d’Arenberg (1690-1754) and Marquise de Tencin (1682-1749), who became known as Salonnière. His mother had him abandoned on the steps of the northern side chapel St-Jean-le-Rond of Notre Dame de Paris. He was adopted as foundling by Madame Rousseau, née Etiennette Gabrielle Ponthieux (ca. 1683-1775), wife of the glassmaker Alexandre Nicolas Rousseau, at the instigation of General Louis Camus Destouches (1668-1726); he remained there until the age of 48. His biological father, however, made it possible for him to have a comprehensive education and training.

At the age of twelve he entered the Collège des Quatre Nations and completed it in 1735 with the baccalauréat en arts. His educators noticed d’Alembert’s talent and supported him to begin an ecclesiastical career, which he rejected. However, D’Alembert understood theology as “rather unsubstantial fodder“. D’Alembert later enrolled at the École de Droit under the surname Daremberg, which he later changed to d’Alembert. He first studied law, then medicine, before finally turning to mathematics and physics in an autodidactic manner.

Works in Mathematics and Physics

His first success was reached at the age of 22, when d’Alembert noticed mathematical errors in Charles René Reynaud’s work ‘L’analyse démontrée‘, which he made public. He was instantly known widely across the scientific community, because of improving a standard work, learned by every student of mathematics. His reputation continued to improve through publishing his work on fluid mechanics and refraction. D’Alembert’s most famous work (besides the encyclopedia) was published in 1743, it was called ‘Traité de dynamique‘, and explained the laws of motion, which he developed himself.

The D’Alembert principle of mechanics is named after him, which allows the equations of motion of a mechanical system to be established with constraints. In 1747 he solved the (one-dimensional) wave equation of the vibrating string, named after him today, and thus became the founder of mathematical continuum physics. He was also the founder of the D’Alembert operator, with which the wave equation can be written in a particularly compact way. D’Alembert also worked in the field of the convergence of series and found the quotient criterion, which is also called D’Alembert’s criterion after him. The reduction method of d’Alembert is important here. Further work was done on probability theory; a popular, certainly useless game system for the roulette game, the Progression d’Alembert, is attributed to him.

The probably most important and most influential work of d’Alembert was his contribution to the famous ‘Encyclopédie ou Dictionnaire raisonné des sciences, des arts et des métiers‘. An encyclopedia in French language. The masterpiece was published by d’Alembert along with Denis Diderot and counts as one of the most important works of the Age of Enlightenment. 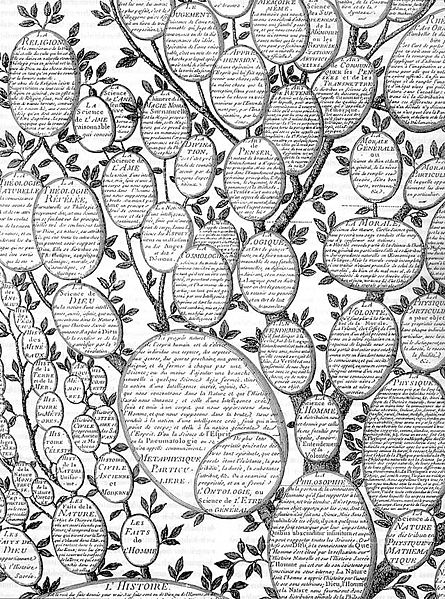 The idea of the encyclopedia was to collect all current human knowledge and to make it accessible to everyone. Special was though, that the publishers saw the necessity to make visible all relations between the single articles. Through cross-references, it was made easier to look for and understand the content and therefore get broadly based information on a specific topic. The work is based on the ‘arbor porphyriana‘ (tree of knowledge) by Francis Bacon.[6] Bacon himself was a widely known philosopher, scientist and a pioneer of empiricism.  The encyclopedia by Diderot [5] and d’Alembert is seen as a turning point in epistemology, they supported Locke’s theory of the development of knowledge though experience and rejected the methods by Carthesius and Aquinas. The work followed the principle of social equality, it rejected the church’s believes, and measured all human interactions on the theory of reason. The work was accepted well by society due to its easy understanding and its good usability due to the cross-references, a new way of the freedom of thought was developed.

D’Alembert edited more than a thousand articles in the encyclopedia in which he was mainly responsible for mathematical problems. Besides the encyclopedia, d’Alembert researched on further mathematical and philosophical problems, such as his laws of motion, wherefore he counts as the father of mathematical physics. D’Alembert’s achievements were essential to the scientific and cultural development of society during the enlightenment and his contributions count as indispensable for this period.

Frederick the Great and the Prussian Academy of Sciences

D’Alembert had been in correspondence with Frederick II of Prussia since 1746.[8] He had taken the initiative for the postal exchange of ideas in response to the prize competition held by the Royal Prussian Academy of Sciences, for which d’Alembert wrote Réflexions sur la cause générale des vents. With her he also endeavoured to become a member of the Berlin Academy. Pierre-Louis Moreau de Maupertuis advised him on his project, and so he wrote a dedication poem to the Prussian king about his writing in Latin. However, Frederick II’s direct answer failed to materialize, rather he answered Jean-Baptiste de Boyer, Marquis d’Argens, instead. When d’Alembert published his Discours préliminaire de l’Encyclopédie in 1751, Frederick II became aware of him.

The Prussian king offered d’Alembert a position as president of the Royal Prussian Academy of Sciences, and although d’Alembert was at times undecided as to whether he should move his centre of life to Prussia, he refrained from the offer. For his life’s work, highly esteemed by Frederick, d’Alembert nevertheless received from 1754 a Prussian pension of 1200 livres. In the summer of 1763 d’Alembert travelled to Sanssouci Castle for a three-month stay. During his stay in Potsdam he visited Leonhard Euler in Berlin.[7] Euler had been appointed in 1741 by Frederick II to the Royal Prussian Academy of Sciences, which he left in 1766 and went back to St. Petersburg, where Catherine the Great resided since 1762 as Empress of Russia. However, d’Alembert’s mistrust of the rulers was always awake. In his 1759 Essai sur la société des gens de lettres et des grands (Essay on the Society of the Literary and the Great), he called on intellectuals to liberate themselves from their humiliating role as courtiers of noble patrons. In his relationship to Frederick II d’Alembert differed from Diderot, who from the Seven Years’ War (also called the Third Silesian War from the Prussian point of view) at the latest had an antipathy towards the Friderician state and its first representatives.

Crisis with Diderot and Later Years

At the end of 1757 and the beginning of 1758, the Encyclopédie experienced a severe crisis under the editorship of Denis Diderot and d’Alembert. This was due to d’Alembert’s articles on the city of Geneva, which were written at Voltaire’s suggestion. The entry led to extensive discussions and numerous letters of protest and finally broke the relationship between the two editors, which had in part already been strained.  D’Alembert was also a brilliant Tacitus translator. He was a member or honorary member of the Russian Academy of Sciences (Petersburg, 1764), the Prussian Academy of Sciences, the American Academy of Arts and Sciences (1781), the Académie des sciences and the Académie française, of which he became General Secretary for life in 1772. He was a member of the Paris Masonic Lodge Les Neuf Sœurs.

D’Alembert died on 29 October 1783 at the age of 65 from the consequences of a urinary bladder disease.