You are here: Home › medical science › William Morton and the Painless Ether Anesthesia 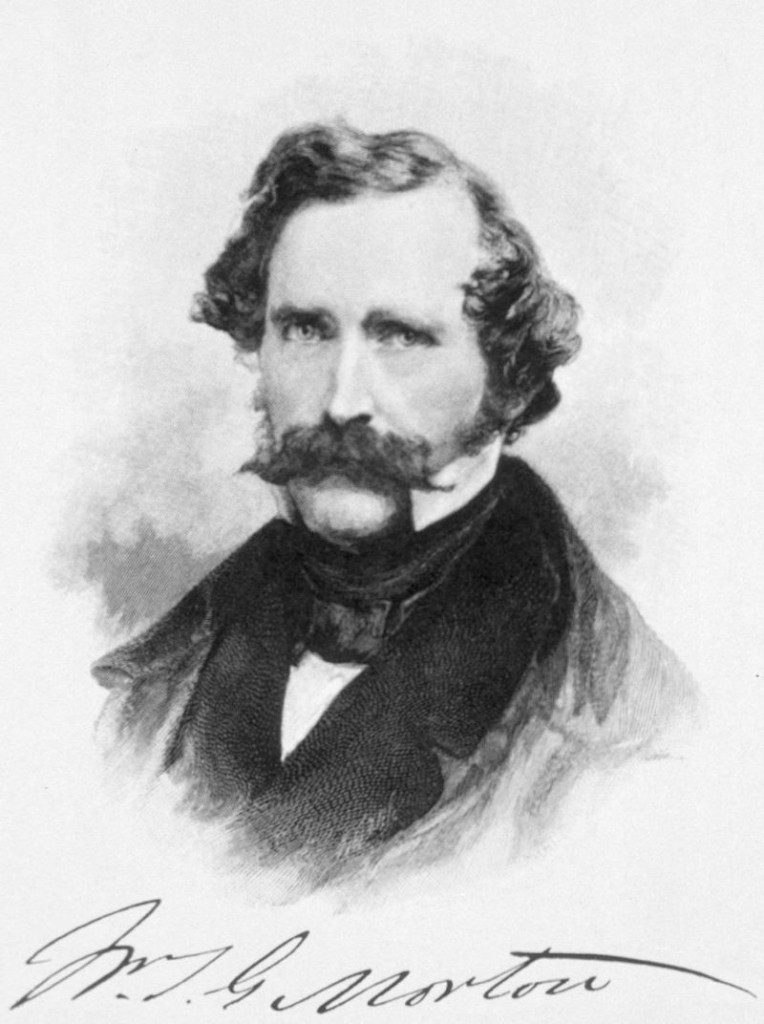 On August 9, 1819, American dentist William Thomas Green Morton was born. He was the first to publicly demonstrate the use of inhaled ether as a surgical anesthetic in 1846. Morton is credited with gaining the medical world’s acceptance of surgical anesthesia. But, can you imagine a surgery without any anesthetic? Standing the pain of an operation, feeling every cut? Better not. Nevertheless, anesthetics already have a long tradition.

The History of Anesthesia

Until the anaesthetic era, surgery was typically an exceedingly noisy affair, punctuated by blood-curdling screams and piteous moaning from a writhing patient. But, already since antiquity, a variety of Solanum species containing potent tropane alkaloids were used for anesthesia throughout Europe, Asia, and the Americas. In 1772, English scientist Joseph Priestley discovered the gas nitrous oxide.[4] Initially, people thought this gas to be lethal, even in small doses. However, in 1799, British chemist and inventor Humphry Davy decided to find out by experimenting on himself.[5] To his astonishment he found that nitrous oxide made him laugh, so he nicknamed it laughing gas. Observing the same physiological effects with diethyl ether (“ether”) that Humphry Davy had originally described for nitrous oxide, American surgeon Crawford Long used ether for the first time on March 30, 1842 to remove the first tumor from the neck of James M. Venable, in Jefferson, Georgia.[6] But, the results of his trials were only published in 1849. So, let’s have a look at the story of William T. G. Morton.

The Life of William Morton

William Morton was born in Charlton, Massachusetts, as the son of a farmer. He found work as a clerk, printer, and salesman in Boston before entering Baltimore College of Dental Surgery in 1840. In 1841, he gained notoriety for developing a new process to solder false teeth onto gold plates. In 1842, he left college without graduating to study in Hartford, Connecticut with dentist Horace Wells, with whom Morton shared a brief partnership. In 1843 Morton married Elizabeth Whitman of Farmington, Connecticut, the niece of former Congressman Lemuel Whitman. Her parents objected to Morton’s profession and only agreed to the marriage after he promised to study medicine. In the autumn of 1844, Morton entered Harvard Medical School. In January 1845, Morton was present at Massachusetts General Hospital, Boston, when Horace Wells, his former dental partner, attempted unsuccessfully to demonstrate the anodyne properties of nitrous oxide gas. Determined to find a more reliable pain-killing chemical, Morton consulted his former teacher, Boston chemist Charles T. Jackson, with whom he had previously done work on pain relief.[1] William Morton initially experimented with opium, stimulants and Mesmerism. Opium relieves pain; dopaminergic stimulants can indeed act as analgesics too; and Mesmerism can sometimes work with extremely suggestible patients and a charismatic doctor. Yet none of these options proved satisfactory.[2]

On September 30, 1846, Morton performed a painless tooth extraction after administering ether to a patient. Upon reading a favorable newspaper account of this event, Boston surgeon Henry Jacob Bigelow arranged for a now-famous demonstration of ether on October 16, 1846 at the operating theater of the Massachusetts General Hospital. At this demonstration Dr. John Collins Warren painlessly removed a tumor from the neck of a Mr. Edward Gilbert Abbott. News of this use of ether spread rapidly around the world. The MGH theatre came to be known as the Ether Dome and has been preserved as a monument to this historic event. Following the demonstration, Morton tried to hide the identity of the substance Abbott had inhaled, by referring to it as “Letheon”, but it soon was found to be ether.

Unfortunately, William Morton attempted to obtain exclusive rights to the use of ether anesthesia. He spent the remainder of his life engaged in a costly contention with Jackson, who claimed priority in the discovery, despite official recognition accorded to Wells and the rural Georgia physician Crawford Long.[6] Crawford Long, Horace Wells and Charles T. Jackson all played a part in the discovery of surgical anesthesia but William T. G. Morton became the best known of the contenders for priority of discovery. The controversy among them continued for years and was never clearly resolved.[3]

William Morton was in New York City in July 1868. He was riding in a carriage with his wife when he suddenly demanded the carriage to stop, and he ran into the lake in Central Park “to cool off”. This peculiar behavior was because he had suffered a major stroke (cerebrovascular accident) which proved fatal soon after.