You are here: Home › physics › Wolfgang Paul and the Quadrupole Ion Trap 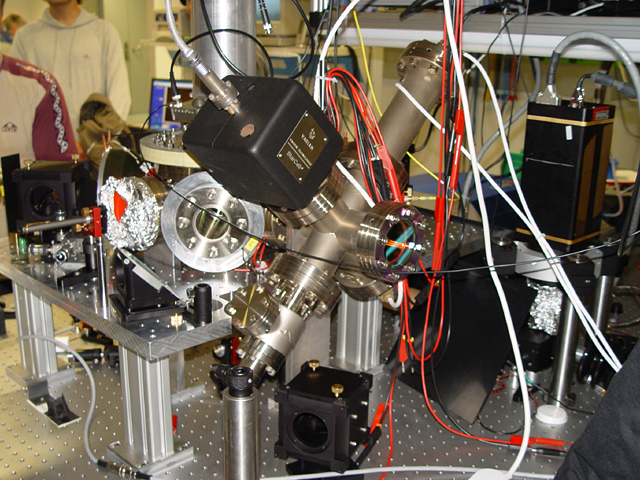 On August 10, 1913, German physicist Wolfgang Paul was born. Paul co-developed the non-magnetic quadrupole mass filter which laid the foundation for what we now call an ion trap. He shared one-half of the Nobel Prize in Physics in 1989 for this work with Hans Georg Dehmelt; the other half of the Prize in that year was awarded to Norman Foster Ramsey, Jr. Ion traps can be used as a component of a mass spectrometer or a trapped ion quantum computer.

The Life of a Scientist

Wolfgang Paul was born on 10 August 1913 in Lorenzkirch, a small village near Riesa in Saxony, Germany, as the forth child of Theodor and Elisabeth Paul. Quite early, Wolfgang Paul became familiar with the life of a scientist in a chemical laboratory, since he grew up in Munich where his father was a professor of pharmaceutical chemistry. Upon advice of famous physicist Arnold Sommerfeld, a former colleague of his father, Wolfgang Paul began with an apprenticeship in precision mechanics.[5] In 1932, he enrolled to study physics at the Technical University of Munich and changed to the Technical University of Berlin in 1934 where he finished his Diploma in 1937 at the group of Hans Geiger. He followed his doctorate adviser Hans Kopfermann to the University of Kiel and after being drafted to the air force he finished his PhD in 1940 at the Technical University of Berlin.

Isotope Separation and the Betatron

During World War II, he researched isotope separation, which is necessary to produce fissionable material for use in making nuclear weapons. In 1944, Paul became Privatdozent at the University of Göttingen with Kopfermann. When Kopfermann heard of the development of the betatron by Donald Kerst in the United States, he immediately saw that scattering experiments with high-energy electrons would enable the study of the charge structure of nuclei. He convinced Paul to turn to this new very promising field of physics.[2] Paul became a professor of Experimental Physics at the University of Bonn and stayed there from 1952 until 1993. For two years from 1965 to 1967 he was director of the Division of Nuclear Physics at CERN.

The properties of atoms are determined by laws of quantum mechanics that say they can have only fixed energy levels and that electromagnetic radiation with certain frequencies is emitted or absorbed when there are transitions among different energy levels. Opportunities to study the properties and spectrums of atoms are improved if individual atoms can be isolated under constant conditions for longer periods. In the 1950s Wolfgang Paul developed a method for using electrical currents and electromagnetic fields to capture charged atoms – ions – in a trap.[1]

The Paul trap, which he developed in the 1950s, used a radio-frequency current to maintain an alternating electric field that isolates and confines charged particles and atoms in a small space. The Paul trap allowed physicists to study atomic properties and test physical theories with high degrees of precision and became an important tool in modern spectroscopy. Paul also invented a way of separating ions of different masses and storing them in the Paul trap, using a principle that was subsequently widely applied in modern spectrometers.[3] He developed molecular beam lenses and worked on a 500 MeV electron synchrotron, followed by one at 2500 MeV in 1965. Later he worked on containing slow neutrons in magnetic storage rings, measuring the free neutron lifetime. 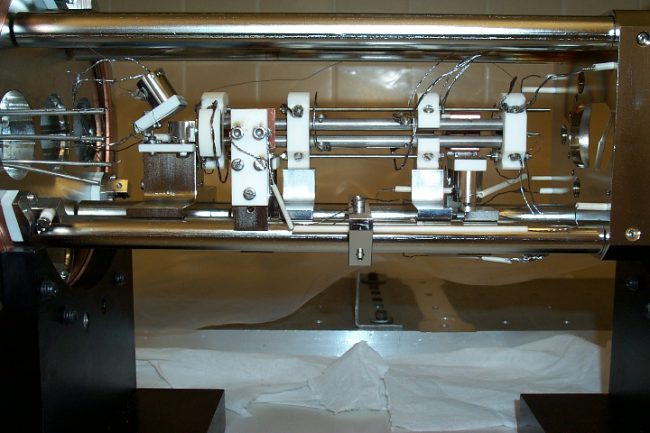 Linear Ion Trap at the University of Calgary

The award of the Nobel Prize came as a surprise, since he had done most of the work that won it in the 1950’s and 1960’s. He shared the prize with Hans G. Dehmelt of the University of Washington and Norman F. Ramsey [7] of Harvard University. In a landmark experiment in 1978, Dr. Paul and his colleagues trapped neutrons in a magnetic storage ring, becoming the first to confine neutral particles electromagnetically. [4]

In 1957, Wolfgang Paul joined a group of 18 noted German nuclear physicists, including Werner Heisenberg,[6] who publicly opposed nuclear weapons for the German military forces that had just been re-established. He also built up the German nuclear research center in Julich, near Aachen, and the German National Laboratory DESY with a synchrotron in Hamburg, which he joined as chairman of the directorate from 1970 to 1973 [4].