You are here: Home › chemistry › Joseph Priestley and the Discovery of Oxygen 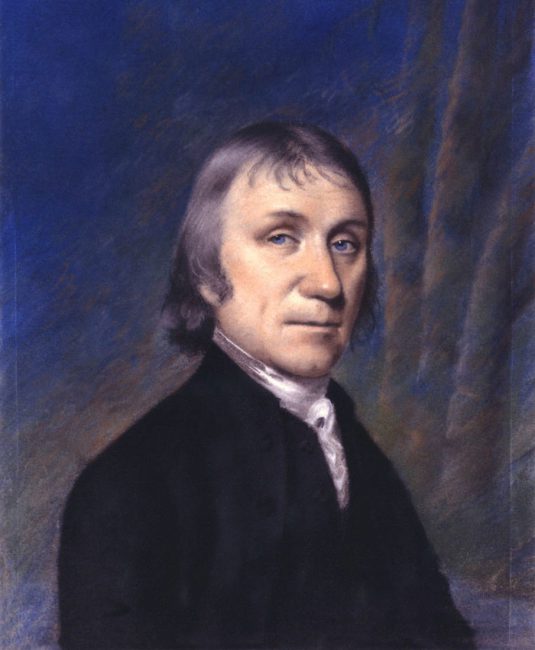 On February 6, 1804, English theologian, Dissenting clergyman, natural philosopher, chemist, educator, and Liberal political theorist Joseph Priestley passed away. Being a rather prolific author with more than 150 works published, he is usually credited with the discovery of oxygen, having isolated it in its gaseous state, although Carl Wilhelm Scheele and Antoine Lavoisier also have a claim to the discovery.[4,6]

“It is known to all persons who are conversant in experimental philosophy, that there are many little attentions and precautions necessary to be observed in the conducting of experiments, which cannot well be described in words, but which it is needless to describe, since practice will necessarily suggest them; though, like all other arts in which the hands and fingers are made use of, it is only much practice that can enable a person to go through complex experiments, of this or any kind, with ease and readiness.”
— Joseph Priestley, Experiments and Observations of Different Kinds of Air (1775)

Joseph Priestley was the son of a cloth maker and was born near the Oakwell Hall mansion, West Yorkshire, UK. His mother died in 1739 and the boy was adopted by his aunt, Sarah Keighley. Priestley was taught mostly at home and began studying theology and ancient languages at a nonconformist school in Daventry at the age of 19. His thinking developed from Calvinism to Unitarianism. Around 1749, Priestley became seriously ill and believed he was dying. Priestley’s illness left him with a permanent stutter and he gave up any thoughts of entering the ministry at that time.

Later on, Priestley also studied languages including French, Italian, and German as well as Aramic and Arabic. Also, he was introduced to mathematics, natural philosophy, logic, and metaphysics through the works of Isaac Watts, Willem’s  Gravesande, and John Locke.  In 1752 Priestley decided to return to his theological studies and matriculated at Daventry, a Dissenting academy and spent most of his life employed as a preacher or teacher. However, he gradually came to question the divinity of Jesus, while accepting much else of Christianity—in the process becoming an early Unitarian. [1] Convinced that education was the key to shaping people and the world’s future, Priestley continued to support the Dissenting academies throughout his life. 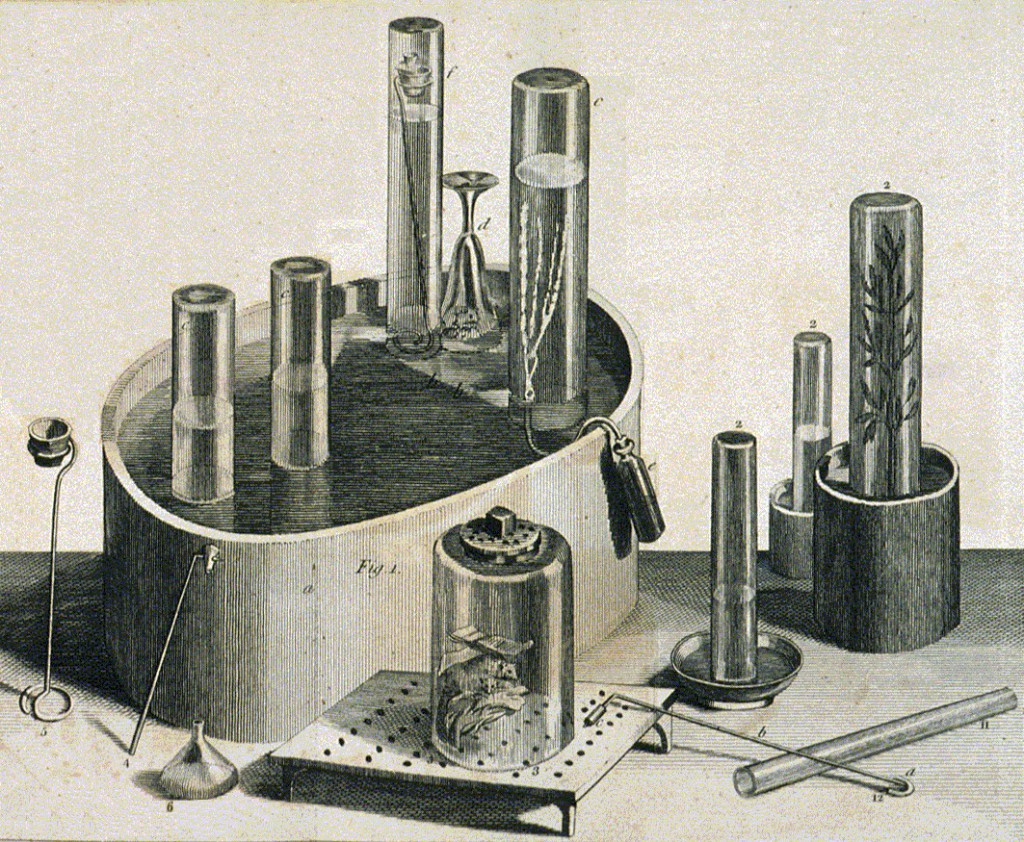 Equipment used by Joseph Priestley in his experiments on gases

From 1755 he was a preacher in a nonconformist congregation in Needham Market in Suffolk. In 1758 Priestley took over a second pastor’s post in Nantwich and already began with physical experiments which amongst others included the induction machine and the air pump. From 1761 he worked as a teacher at the Warrington Academy in Lancashire, a private commercial school. A year later he was ordained priest and married Mary Wilkinson. From 1763 onwards he took part in chemistry courses, from 1765 onwards he regularly spent several weeks in London, where he met leading scientists. This was also the case with Benjamin Franklin, who encouraged him to carry out electrical experiments.[7]

The History of Electricity

‘The History of Electricity‘ was Priestley’s first known scientific work and for this achievement, he was made Fellow of the Royal Society. It is believed that he had been inspired by Benjamin Franklin, whom he met in London. Priestley began performing experiments in order to reproduce those reported in scientific works, and later on he started answering some questions on his own. Priestley became interested in the research of nature and gases. Since he was living next to a brewery, Priestley was able to obtain a great supply of carbon dioxide. In his first known publication on the topic, Joseph Priestley described how to carbonate water, in imitation of some naturally occurring bubbly mineral waters. Probably inspired by the works of Stephen Hales.[5]

Priestley started examining the ‘airs’ that may be released from different substances. He managed to isolate and characterize about eight gases including oxygen. Priestley is also credited with important contributions to the understanding of photosynthesis.[1] He proved that plants somehow change the composition of the air. In one of his famous experiments, Priestley kept a mouse in a jar of air until it collapsed and he found out that a mouse that was kept with a plant would survive. He developed the hypothesis that plants restore to the air whatever breathing animals and burning candles remove. [2, 3]

One of Priestley’s most famous experiment was performed in 1774. He used a 12-inch-wide glass “burning lens” and focused sunlight on a lump of reddish mercuric oxide in an inverted glass container placed in a pool of mercury. As a result, the gas emitted and he found it “five or six times as good as common air“. After further tests, Priestley called his discovery “dephlogisticated air“. He explained that it supported combustion so well because it had no phlogiston in it, and hence could absorb the maximum amount during burning. However, the Swedish apothecary Carl Wilhelm Scheele [4] isolated the same gas and observed a similar reaction. Scheele called his material “fire air” but he did not publish his findings until 1777. [2]

In 1772 he was employed by William Fitzmaurice-Petty, Earl of Shelbourne, as a librarian and private tutor at Bowood House, his family seat; he retained this position until 1780. In 1772 Joseph Priestley received the Copley Medal from the Royal Society. Between 1774 and 1780 he wrote the five-volume work Experiments and Observations on different kinds of Air. His progressive theological views had already entered him in Needham Market Critique. He increasingly approached anti-trinitarian positions and in 1774 founded together with Theophilus Lindsey the first unitarian community of London in Essex Street Chapel. Today he is therefore regarded as one of the co-founders of British Unitarianism. His turn to radical reformist unitarianism led, among other things, to the withdrawal of an invitation to participate as an astronomer in James Cook‘s second expedition.[8]

Around 1780 there was also a dispute with Count Shelburne, so that he moved to Birmingham. Although the conditions in Birmingham were very favorable, his theological views and political activities led to a break with his acquaintances. Priestley stood up for human rights and also upheld the ideals of the French Revolution. One of his books was burned heretically in public in 1785. Because of his advocacy of the French Revolution and several other long-standing conflicts over his person and the dissenters, the four-day Priestley Riots in Birmingham took place in 1791. Priestley lost his house with laboratory, library and numerous unpublished manuscripts He went from Birmingham to London and emigrated to the United States in 1794, where he was welcomed as a scientist and as a fervent defender of religious and political freedom. His close friends included John Adams and Thomas Jefferson. He spent the rest of his life as a writer in Pennsylvania.