You are here: Home › chemistry › Edward C. Kendall and the Adrenal Cortex Hormones 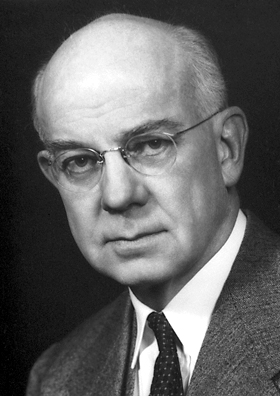 On March 8, 1886, American chemist and Nobel laureate Edward Calvin Kendall was born. Kendall shared the Nobel Prize for Physiology or Medicine in 1950 with Philip S. Hench and Tadeus Reichstein for research on the structure and biological effects of adrenal cortex hormones. Kendall did not only focus on the adrenal glands, he was also responsible for the isolation of thyroxine, a hormone of the thyroid gland and worked with the team that crystalized glutathione and identified its chemical structure.

Edward C. Kendall was born in South Norwalk, Connecticut in 1886, the third child of George S. Kendall, a dentist, and his wife Eva. Already at Stamford High School Kendall developed an interest in chemistry. He attended Columbia University as one of the first students of Henry Clapp Sherman, earning a Bachelor of Science degree in 1908, was awarded a scholarship for post-graduate work and finished a Master of Science degree in Chemistry in 1909. He became the first recipient of the Goldschmidt Fellowship and began research on amylase, an enzyme of the pancreas. In 1910, he received a Ph.D. in Chemistry from Columbia University for his research on the enzyme amylase.

Hormones of the Thyroid Gland

Kendall began working in the chemical laboratory of Parke Davis and Company at Detroit, Michigan, U.S.A. His assignment was to isolate the hormone of the thyroid gland. Then he returned to New York City, where he accepted an invitation to occupy and equip a new laboratory in St. Luke’s Hospital, and he continued research on the thyroid gland. At the turn of the century, Eugen Baumann, a physiological chemist at the University of Freiburg, had prepared iodine-containing extracts of thyroid glands that were useful in treating clinical hypothyroidism. Baumann’s partially purified principle was named iodothyrin.[2] In 1913, based on Baumann’s work, Kendall by 1913 had purified the active principle about a hundredfold.

The Isolation of Tyroxine and Cortisone

In 1914 he was appointed Head of the Biochemistry Section in the Graduate School of the Mayo Foundation, Rochester which is affiliated with the University of Minnesota, and in 1915 he was appointed Director of the Division of Biochemistry there and subsequently Professor of Physiological Chemistry.[1] Kendall’s most notable discovery was the isolation of thyroxine, although it was not the work he received the most accolades for. Along with associates, Kendall was involved with the isolation of glutathione and determining its structure. He also isolated several steroids from the adrenal gland cortex, one of which was initially called Compound E. Working with Mayo Clinic physician Philip Showalter Hench, Compound E was used to treat rheumatoid arthritis. The compound was eventually named cortisone.[3]

In 1941, wartime intelligence reported (wrongly, as it turns out) that hormones from adrenal extracts were being used by Luftwaffe pilots to increase their ability to withstand higher altitudes. At the request of military medical departments, the National Research Council of the United States requested that qualified labs and manufacturers quickly find ways to produce high volumes of adrenal hormones. This devised research into methods for laboratory preparation of adrenal hormones without using adrenal glands as a starting point.

The Nobel Prize for Physiology and Medicine

After many years the hormones of the adrenal cortex were isolated, identified, and prepared by synthetic methods in small amounts. Subsequently, they were made commercially on a scale sufficiently large to permit a study of their physiological effects. It was then found that many other diseases of an inflammatory nature were relieved by cortisone. Although it was found later that cortisone, like insulin, acts only so long as it is given to the patient, and that it does not cure the disease, the discovery of the activity of cortisone was a great step forward. For their work, Kendall, Hench, and Reichstein jointly were given the Nobel Prize for Physiology and Medicine for 1950. Since his retirement to Princeton University, Kendall has continued his studies of the chemistry of the adrenal cortex and remained affiliated with Princeton until his death in 1972. In addition to the Nobel Prize, Kendall received other major awards including the Lasker Award and the Passano Foundation Award.