You are here: Home › medical science › Crawford Long and the Diethyl Ether Anesthesia 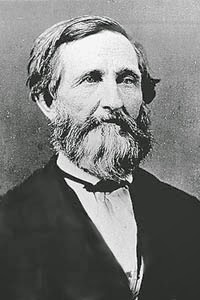 On March 30, 1842, American surgeon and pharmacist Crawford Williamson Long for the very first time used inhaled diethyl ether as an anesthetic for surgery. Can you imagine a surgery without anesthetic? Standing the pain while a surgeon is cutting something somewhere in your body? I think better not to. But, anesthetics already have a long tradition, longer than you might think.

Already since antiquity, a variety of Solanum species containing potent tropane alkaloids were used for anesthesia throughout Europe, Asia, and the Americas. In 13th century Italy, Theodoric Borgognoni from the Salerno school of medicine used similar mixtures along with opiates to induce unconsciousness in the form of a “soporific sponge” (“sleep sponge”). In this anesthetic method, a sponge was soaked in a dissolved solution of opium, mandragora, hemlock juice, and other substances. The sponge was then dried and stored; just before surgery the sponge was moistened and then held under the patient’s nose. When all went well, the fumes rendered the patient unconscious. In 1275, Spanish physician Raymond Lullus, while experimenting with chemicals, made a volatile, flammable liquid he called sweet vitriol. Sweet vitriol, or sweet oil of vitriol, was the first inhalational anesthetic used for surgical anesthesia. It is no longer used often because of its flammability.

in 1772, English scientist Joseph Priestley discovered the gas nitrous oxide. Initially, people thought this gas to be lethal, even in small doses. [3] However, in 1799, British chemist and inventor Humphry Davy decided to find out by experimenting on himself. To his astonishment he found that nitrous oxide made him laugh, so he nicknamed it laughing gas.[4] This is about the time, when Crawford Long came into play.

Long began training as a physician with Georg Grant in Georgia in 1836 and enrolled at Transylvania University in Lexington in 1836 to study medicine. In 1838 he transferred to the University of Pennsylvania in Philadelphia, where he received the degree of Medical Doctor in 1839. Afterwards Long was practically active in New York City until 1841, where he studied surgery in particular. In 1841 he settled as a general practitioner in rural Jefferson in Jackson County, Georgia.

During his studies in Philadelphia, Crawford Long, together with fellow students, became acquainted with the intoxicating effect of diethyl ether. The use of the substance as an intoxicating drug was popular in the 19th century. After settling in rural Jefferson in 1841, Long met a group of men there in December 1841 or January 1842 to inhale nitrous oxide. Since Long did not have the necessary equipment to produce the gas he requested, he suggested instead that the more readily available diethyl ether be used, which he then made available to those present. At this and similar meetings, Long had found that the participants did not seem to feel any pain when exposed to the inhaled substance. This and his own experience with the inhalation of the substance as well as the observations by Humphry Davy prompted him to perform a surgical procedure under ether administration.

One of Long’s patients, James M. Venable, had postponed the planned removal of two cystic tumors in his neck several times because he was afraid of the painful procedure. Crawford Long suggested that he perform the procedure under the influence of diethyl ether, under which he might not feel any pain. Venable had already inhaled ether in social circles and agreed to the removal of a tumour. On 30 March 1842, Crawford Long removed the encapsulated tumour. His patient inhaled ether from a towel soaked with it. According to Long, he showed no signs of pain and assured Long afterwards that he had not felt any pain during the operation. On June 6, 1842, the second tumor was removed under largely successful “etherization”. By September 1846, he performed eight more surgical procedures using sulfur ether.

Long only published his results seven years after in The Southern Medical and Surgical Journal. The article also includes the authentication of the account by patient Venable, two witnesses to the procedure, and a mention of another operation performed under ether anesthesia on July 3, 1843. But already on October 16, 1846, unaware of Long’s prior work with ether during surgery, William T. G. Morton administered ether anesthesia before a medical audience at the Massachusetts General Hospital in Boston, Massachusetts. Although Long had informed several surgical colleagues who had similarly administered ether in their practices, Morton is generally credited with the first public demonstration of ether anesthesia.