You are here: Home › chemistry › Humphry Davy and the Wonders of Electrolysis 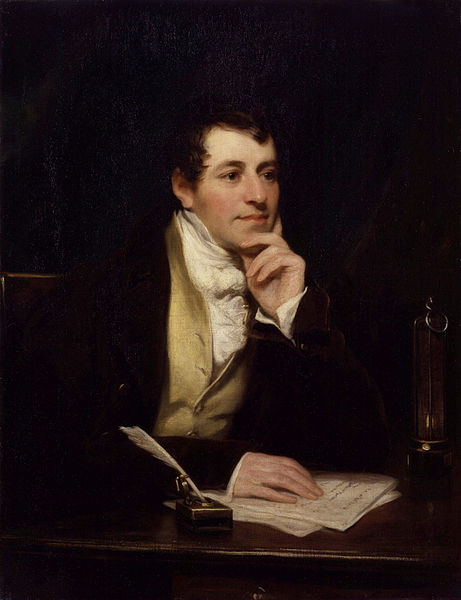 On November 19, 1807, British chemist and inventor Humphry Davy reported to the Royal Society about the isolation of potassium and sodium from different salts by electrolysis. Davy was one of the pioneers in the field of electrolysis using the newly invented voltaic pile to split up common compounds and thus prepare many new elements.[6]

“Nothing is so fatal to the progress of the human mind as to suppose that our views of science are ultimate; that there are no mysteries in nature; that our triumphs are complete, and that there are no new worlds to conquer.”
– Humphry Davy as quoted in [12]

Humphry Davy was the son of a wood carver and first apprenticed to a surgeon and pharmacist in his home town (1794). As an autodidact he acquired comprehensive knowledge in the fields of chemistry and physics. In an experiment he was able to prove that heat is nothing material, published in his works on ‘Heat and Light‘, which resulted in a post as an assistent to superintend the laboratory at the ‘Pneumatic Institution’  founded by Thomas Beddoes in Bristol. The institute studied the healing effects of gases, but many of the gases studied were very toxic. In experiments carried out in the Bristol laboratory between 1795 and 1798, he discovered the intoxicating and analgesic effect of nitrous oxide, which he used to treat toothache. Also in 1798 Beddoes commissioned him to head the “Pneumatic Institute”. In his description of the nitrous oxide effect published in 1800, he also recommended it for use in surgical operations.

But Humphry Davy not only spent his time in laboratories, he was also a gifted poet and wrote many pieces until finally abandoning poetry for science in sense of his career. Still he wrote many poems about his life and works as a scientists, like “On Breathing Nitrous Oxide“:

“Not in the ideal dreams of wild desire
Have I beheld a rapture-wakening form:
My bosom burns with no unhallow’d fire,
Yet is my cheek with rosy blushes warm;
Yet are my eyes with sparkling lustre fill’d;
Yet is my mouth replete with murmuring sound;
Yet are my limbs with inward transport fill’d;
And clad with new-born mightiness around.”

At the Royal Institution

At around 1800, Humphry Davy moved to London and was from then on occupied at the Royal Institution to give chemical lectures, to take care of the laboratories and editor of the institution’s journals. Here he gave public experimental lectures on chemistry and agricultural chemistry. Davy soon became interested in the voltaic ash column and electrolytic phenomena. The students very much enjoyed his lectures, due to his entertaining way of presenting the institution’s scientific discoveries. He performed many dangerous experiments in the lecture halls with a great portion of charm and humor, wherefore he was soon one of the most popular scientists in London. 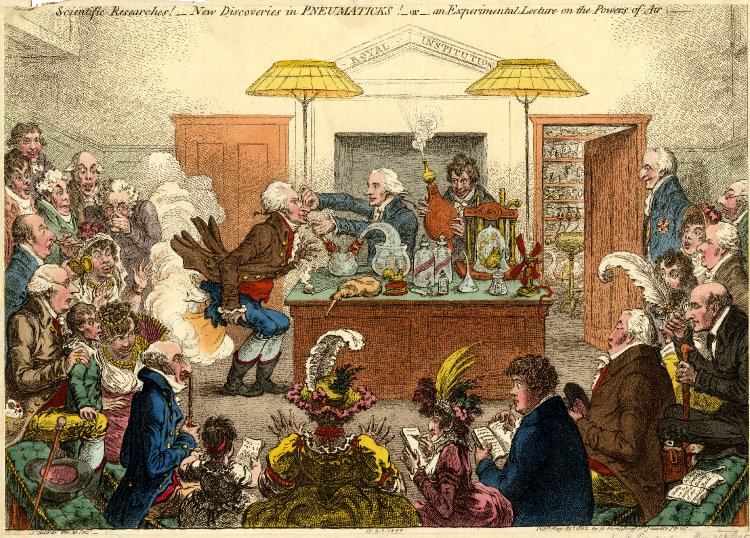 1802 satirical cartoon by James Gillray showing a Royal Institution lecture on pneumatics, with Davy holding the bellows and Count Rumford looking on at extreme right. Dr Thomas Garnett is the lecturer, holding the victim’s nose.

Davy was an outstanding chemist in the first half of the 19th century.  Davy’s good reputation grew even bigger as soon as he was known to be the pioneer of electrolysis.As one of the first he used electric current from the voltaic column for chemical experiments. Using the voltaic pile, he was able to establish new metals like magnesium, boron or barium. The voltaic pile itself was invented in 1799 by Alessandro Volta [6] and depicted the very first voltage source able to initiate a long lasting current flow. Humphry Davy noticed Volta’s discovery through its publishing at the Royal Institution and performed his first experiment with litmus paper to discover a flow of ions during the electrolysis. Davy explained the formation of acids and bases in electrolysis with the presence of salts or impurities. In pure water, his experiments failed to produce acids and bases. He also investigated the migration velocity of the ions of acids and bases during electrolysis. So far it had been assumed that alkali salts were indecomposable and elementary. Davy was able to convert sodium hydroxide and potassium hydroxide into the metallic elements sodium and potassium by means of a molten electrolysis using the voltaic ash column.

By electrolysis of saline solution he had isolated the chlorine, with hydrogen the chlorine reacted to hydrogen chloride. Davy postulated that chlorine gas was a chemical element and not a compound. Davy now recognized hydrogen and not oxygen as an essential characteristic of all acids. By electrolysis of molten alkaline earths, he succeeded in depicting the elements barium, strontium, calcium and magnesium. Davy is thus one of the pioneers of modern electrochemistry. He also created the chemical prerequisites for later photography. Among other things, he discovered the light-sensitive silver iodide. Davy also discovered phosphorus trichloride, phosphorus pentachloride and chlorine dioxide. One of his most important technical inventions was a mine lamp used to indicate firedamp in mining (Davy’s safety lamp); he also dealt with electrically operated lamps: in 1802 he conducted electricity through a platinum filament and made it glow. In 1809 he developed the first arc lamp. He also found a method to protect the copper on sailing ships against weathering (by attaching a zinc plate, see also sacrificial anode). Davy never applied for a patent. Important for agricultural research were his London experimental lectures on agricultural chemistry, in which he critically summarized all the knowledge in this field. The text of these lectures was published in 1813 as a book entitled Elements of Agricultural Chemistry.

His achievements in chemistry seemed to never end. Davy improved Carl Wilhelm Scheele‘s discoveries with chlorine and continued his entertaining lectures on the newest efforts on his fields of research.[7] Davy began giving lectures for the public, which were always overcrowded due to his enjoyable talks. It was also one of these public talks when the curious Michael Faraday, [8] back then just an apprentice to a book binder, saw Davy Humphrey, which changed his whole life plan. Davy initially employed Michael Faraday as an assistant at the Royal Institution, thus enabling his scientific career. Davy supported him like no other, which made many discoveries in physics and chemistry by Faraday possible. Faraday was then to become an even more influential scientist, which caused several tensions between the two, but that is a whole different story…

From 1820 to 1827 he was president of the Royal Society. In this capacity he was one of the most influential scientists in England at the time, but his health was already seriously damaged at this stage. The multitude of his experiments, commitments and inhaled toxins had damaged his health early on. After two strokes he died at the age of 50 in Geneva, where he was buried.