You are here: Home › astronomy › William Lassell and the Discovery of the Uranus Moons Ariel and Umbriel 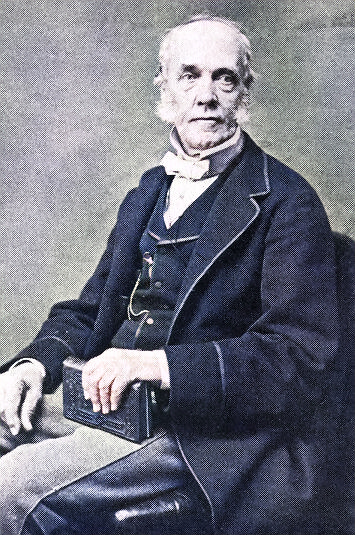 On October 24, 1851, English merchant and astronomer William Lassell discovered Ariel and Umbriel, two moons of planet Uranus. Besides, he also discovered the Neptune moon Triton and the Saturn moon Hyperion.

William Lassell was born in Bolton, Lancashire, UK,  and educated in Rochdale Academy. He was apprenticed to a merchant in Liverpool and later became a beer brewer and hobby astronomer. Lassell built himself an observatory in West Derby, a suburb of Liverpool with a 610 mm reflector telescope for which he pioneered the use of an equatorial mount for easy tracking of objects as the Earth rotates. Around 1854 the observatory was moved to Bradstone.

The Moons of Saturn, Uranus, and Neptune

Already in 1846, William Lassell discovered the largest moon of Neptune, Triton, 17 days after the discovery of Neptune itself by Johann Gottfried Galle.[4] Two years later, independently co-discovered Hyperion, a moon of Saturn. Both Ariel and the slightly larger Uranian satellite Umbriel were discovered by William Lassell on 24 October 1851. Although William Herschel,[5] who discovered Uranus’s two largest moons Titania and Oberon in 1787, claimed to have observed four additional moons, however this was never confirmed and those four objects are now thought to be spurious. All of Uranus’s moons are named after characters from the works of William Shakespeare [8] or Alexander Pope‘s The Rape of the Lock.[7] The names of all four satellites of Uranus then known were suggested by John Herschel [6] in 1852 at the request of Lassell. Ariel is named after the leading sylph in The Rape of the Lock. It is also the name of the spirit who serves Prospero in Shakespeare’s The Tempest.

Montage of Uranus’ five largest satellites. From left to right in order of increasing distance from Uranus are Miranda, Ariel, Umbriel, Titania and Oberon. Images are presented to show correct relative sizes and brightness. Coverage is incomplete for Miranda and Ariel; gray circles depict missing areas

In total, Uranus has 27 known natural satellites and along with Ariel and Umbriel, Miranda, Titania, and Oberon belong to the five main satellites. The Uranian satellite system is the least massive among those of the giant planets and it is believed that the combined mass of Uranus’ five major satellites would be less than half that of Triton, the largest moon of Neptune, alone. Among the Uranian satellites, Ariel appears to have the youngest surface with the fewest impact craters and Umbriel’s the oldest.