You are here: Home › physics › Felix Bloch and the Nuclear Magnetic Resonance Method 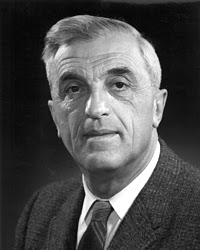 “While I am certainly not asking you to close your eyes to the experiences of earlier generations, I want to advise you not to conform too soon and to resist the pressure of practical necessity. Free imagination is the inestimable prerogative of youth and it must be cherished and guarded as a treasure.”
– Felix Bloch, in his Nobel Prize Banquet Speech, December 10, 1952.

Felix Bloch’s father, Gustav Bloch (1868-1947) was a Moravian grain merchant, his mother Agnes née Mauer (1878-1970) was from Vienna. After attending the city school in Zurich from 1912 and graduating from the Kantonsschule Rämibühl, Felix Bloch began studying mechanical engineering; between 1924 and 1927 he studied mathematics and physics at the Swiss Federal Institute of Technology in Zurich (ETH). There, he attended the lectures of Peter Debye [6] and Hermann Weyl at ETH Zürich and Erwin Schrödinger [4] at the University of Zurich.

One of his fellow students was also John von Neumann. Bloch graduated in 1927 and continued his studies at the University of Leipzig. There, he met and studied with Werner Heisenberg, he received his Ph.D. in 1928. The doctoral thesis dealt with the behavior of electrons in crystal lattices and was the starting point for his life’s work: the quantum mechanical treatment of solid state physics, to the foundations of which he contributed much, such as the band model of electrons in solids and the Bloch function. He was Werner Heisenberg’s first doctoral student in 1928 and returned to ETH Zurich for a year, where he was an assistant to Wolfgang Pauli until 1929.

After intermediate stations in Utrecht and Haarlem in the Netherlands, Felix Bloch became an assistant to Werner Heisenberg [5] in Leipzig in 1931. He habilitated in 1932 with a thesis “Zur Theorie des Austauschproblems und der Remanenzerscheinung der Ferromagnetika” (On the Theory of the Exchange Problem and the Remanence Phenomenon of Ferromagnetics), in which he discusses, among other things, the transition regions between different magnetized domains, now called Bloch walls. He was then appointed Privatdozent in Leipzig and had to leave Germany due to the rise of the Nazi party. Bloch continued his career at Stanford University and later Berkeley. He became a citizen of the United States and worked on nuclear power at Los Alamos National Laboratory during World War II before resigning to join the radar project at Harvard University. Felix Bloch focused on his research on nuclear magnetic resonance and nuclear induction. Nuclear magnetic resonance was first described and measured in molecular beams by Isidor Rabi around 1938.

From the summer of 1942, Bloch worked on the Manhattan Project in Los Alamos, to which he had been invited by Robert Oppenheimer,[7] whom he still knew from Berkeley. He worked in Seth Neddermeyer’s group on the implosion version of the atomic bomb. According to his own statements, however, he considered his work done at the end of 1943 and left. He did not like the military atmosphere of secrecy and he also had doubts that the real reason – a possible lead of the Germans in the development of the atomic bomb – was still actual. According to the memoirs of Edward Teller,[8] there were also differences with Oppenheimer. November 1943 he left Los Alamos as one of the few physicists who were allowed to do so. He changed to radar research at Harvard.

In 1944, Rabi was awarded the Nobel Prize in physics for this work on the topic. About two years later, Felix Bloch and Edward Mills Purcell expanded the technique for use on liquids and solids, for which they shared the Nobel Prize in Physics in 1952.[9] The three scientists, Rabi, Bloch, and Purcell observed that magnetic nuclei could absorb RF energy when placed in a magnetic field and when the RF was of a frequency specific to the identity of the nuclei. When this absorption occurs, the nucleus is described in resonance. Different atomic nuclei within a molecule resonate at different frequencies for the same magnetic field strength. The observation of such magnetic resonance frequencies of the nuclei present in a molecule allows any trained user to discover essential chemical and structural information about the molecule. The development of Nuclear Magnetic Resonance as a technique in analytical chemistry and biochemistry parallels the development of electromagnetic technology and advanced electronics and their introduction into civilian use.

When CERN was being set up in the early 1950s, its founders were searching for someone of stature and international prestige to head the fledgling international laboratory, and in 1954 Professor Bloch became CERN’s first Director-General. After leaving CERN, he returned to Stanford University. Bloch died in Zürich in 1983 at age 77.