You are here: Home › astronomy › John Herschel – a Pioneer in Celestial Photography 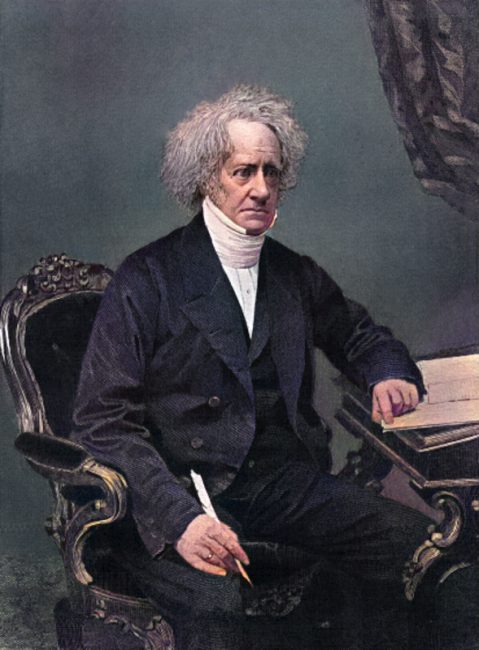 On March 7, 1792, English polymath, mathematician, astronomer, chemist, inventor, and experimental photographer Sir John Herschel was born. Herschel originated the use of the Julian day system in astronomy and named seven moons of Saturn and four moons of Uranus. He made many contributions to the science of photography, and investigated colour blindness and the chemical power of ultraviolet rays. Overall, he advocated an inductive approach to scientific experiment and theory building, which is considered an important contribution to the philosophy of science.

“Man is constituted as a speculative being; he contemplates the world, and the objects around him, not with a passive indifferent eye, but as a system disposed with order and design.”
— Sir John Herschel,  A Preliminary Discourse on the Study of Natural Philosophy (1831)

The Son of a Famous Astronomer

John Frederick William Herschel was born in Slough, Buckinghamshire, the son of Mary Baldwin and famous astronomer William Herschel, who discovered Uranus [1]. In addition to his parents, his aunt Caroline Herschel was another important figure in John Herschel’s upbringing.[2] John was brought up in Observatory House, with its 40 foot telescope, where music, science and religion were dominant. Caroline Herschel had left her brother’s home when he married, but she continued to come to Observatory House every day to help William reduce his data and she proved an outstanding teacher to John, carrying out experiments in physics and chemistry with the young boy.[3]

The Analytical Society of Cambridge

Herschel studied shortly at Eton College and St John’s College, Cambridge, graduating as Senior Wrangler in 1813. Also in 1813 he was elected as a fellow of the Royal Society of London, having published a mathematics paper On a remarkable application of Cotes’s theorem in the Transactions of the Royal Society. It was during his time as an undergraduate that he became friends with Charles Babbage and George Peacock [4], with whom in 1812 he founded the Analytical Society of Cambridge to introduce continental methods of mathematical calculus into English practice. They did so by replacing the cumbersome symbolism of Newton with the more efficient type invented by the German philosopher and mathematician Gottfried Wilhelm Leibniz.[5]

John Herschel left Cambridge in 1816 and started working together with his father. He took up astronomy in 1816, building a reflecting telescope with a mirror 18 inches (460 mm) in diameter and with a 20-foot (6.1 m) focal length. Between 1821 and 1823 he re-examined, with James South, the double stars catalogued by his father. He was one of the founders of the Royal Astronomical Society in 1820. For his work with his father, he was presented with the Gold Medal of the Royal Astronomical Society in 1826 , and with the Lalande Medal of the French Academy of Sciences in 1825, while in 1821 the Royal Society bestowed upon him the Copley Medal for his mathematical contributions to their Transactions. Herschel was made a Knight of the Royal Guelphic Order in 1831.

Perhaps most surprising of all was the decision that Herschel made after graduating, when he decided to enter the legal profession, much against the advice of his father who wanted him to join the Church, and he went to London in February 1814 to begin training. It was not long before he found that it was not right for him and after 18 months, he gave up his legal training and returned to Cambridge as a tutor and examiner in mathematics. In 1822, John Herschel published his first paper on astronomy, a relatively minor work on a new method to calculate eclipses of the moon. His first major publication in astronomy was a catalogue of double stars which he published in the Transactions of the Royal Society in 1824 and for which he received honours. The work on double stars had been undertaken as a continuation of his father’s work which attempted to measure the parallax of a star. The parallax is the apparent change in position of a relatively nearby star against the background of very distant stars due to the change in position of the earth in its orbit around the sun.[3] The movements of these pairs of stars about each other offered the best hope of investigating the gravitational forces operating in the universe.[5]

Photograph of the Moon Calotype made by Sir John Herschel – 1842

John Herschel’s sense of obligation to complete his father’s work in astronomy led him to consider a journey to the Southern Hemisphere to survey the skies not visible in England. Herschel arrived in Cape Town on 15 January 1834 and set up a private 21 ft (6.4 m) telescope at Feldhausen at Claremont, a suburb of Cape Town. Amongst his other observations during this time was that of the return of Comet Halley. Herschel recognised that the comet was being subjected to major forces other than gravitation and he was able to calculate that the force was one repelling it from the sun. This could in some sense be said to constitute the discovery of the solar wind which is indeed the reason for the repulsive force discovered by Herschel. He also made the important discovery that gas was evaporating from the comet.[3]

John Herschel collaborated with Thomas Maclear, the Astronomer Royal at the Cape of Good Hope and the members of the two families became close friends. During this time, he also witnessed the Great Eruption of Eta Carinae (December, 1837). When HMS Beagle called at Cape Town, Captain Robert FitzRoy and the young naturalist Charles Darwin visited Herschel on 3 June 1836.[8] Later on, Darwin would be influenced by Herschel’s writings in developing his theory advanced in The Origin of Species.[9] When the family embarked for home in March of 1838, John had recorded the locations of 68,948 stars and had amassed long catalogs of nebulae and double stars. He had also described many details of the Great Nebula in the constellation Orion, as well as the Magellanic Clouds, being published as Results of Astronomical Observations made at the Cape of Good Hope in 1847. In this publication he proposed the names still used today for the seven then-known satellites of Saturn: Mimas, Enceladus, Tethys, Dione, Rhea, Titan, and Iapetus.

A Pioneer of the Photographic Process

Herschel was also a highly accomplished chemist. His discovery in 1819 of the solvent power of hyposulfite of soda on the otherwise insoluble salts of silver was the prelude to its use as a fixing agent in photography. On 22 January 1839 Herschel heard of Daguerre’s work on photography from a casual remark in a letter.[10] Without knowing any details, he was able to take photographs himself within a few days. In the same year, independently of Fox Talbot [6], he invented the process of photography on sensitized paper. He was the first person to apply the now well-known terms “positive” and “negative” to photographic images, and to imprint them upon glass prepared by the deposit of a sensitive film [5].

“Science is the knowledge of many, orderly and methodically digested and arranged, so as to become attainable by one.”
– Sir John Herschel, A Preliminary Discourse on the Study of Natural Philosophy (1831)

In 1850 Herschel made a rather strange decision as to the future direction of his career. He had turned down entering parliament as a Cambridge University member and accepted the post of Master of the Mint at a very difficult time, with a major reform already agreed but its implementation not begun. Furthermore, Herschel proposed a correction to the Gregorian calendar, making years that are multiples of 4,000 not leap years, thus reducing the average length of the calendar year from 365.2425 days to 365.24225. Although this is closer to the mean tropical year of 365.24219 days, his proposal has never been adopted because the Gregorian calendar is based on the mean time between vernal equinoxes (currently 365.242374 days). In 1856 he resigned his post at the Mint. He spent his remaining years working on the catalogs of double stars and of nebulae and star clusters, until his death in 1871.

At yovisto academic video search you may be interested in the astronomy video lecture ‘The Search for Planet X‘ at Gresham College by Professor Ian Morison.