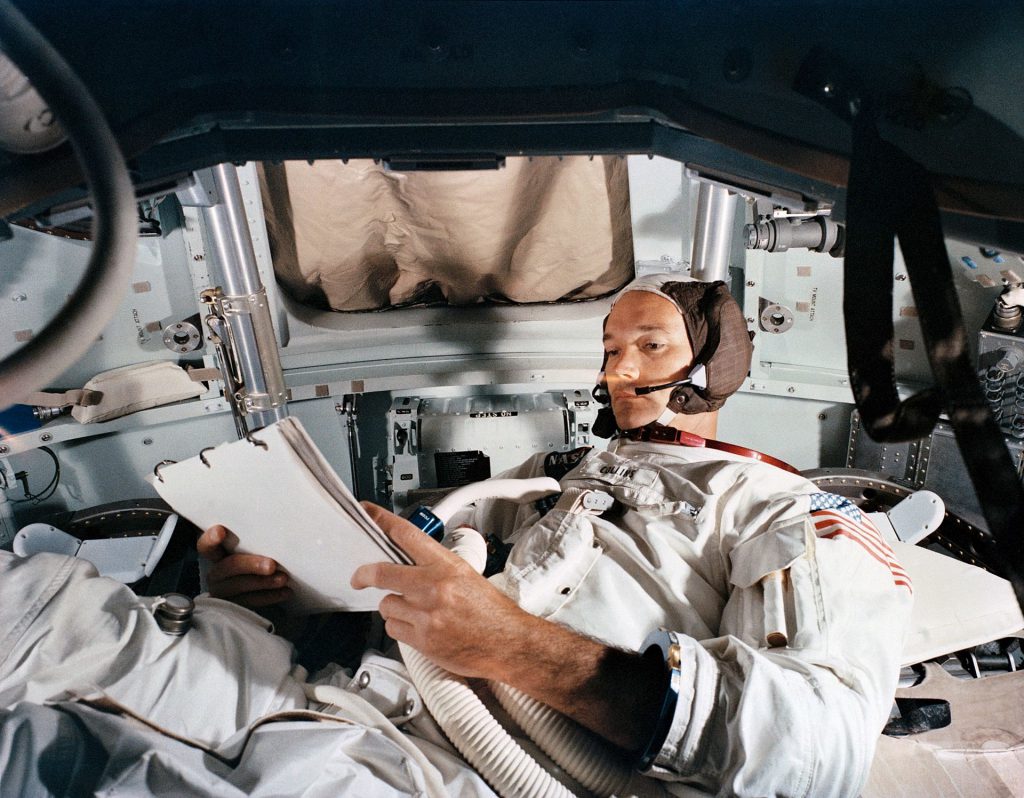 On October 31, 1930, American astronaut and test pilot Michael Collins was born. Collins’ second spaceflight was as the Command Module Pilot for Apollo 11. While he stayed in orbit around the Moon, Neil Armstrong [4] and Buzz Aldrin left in the Lunar Module to make the first manned landing on its surface.

Michael Collins was born in Rome, Italy, where his father, Army Officer James Lawton Collins, was a military attaché. He attended Saint Albans School in Washington, D.C. and then studied at the Military Academy in West Point, where he graduated in 1952 with a Bachelor of Science degree. Collins decided to join the United States Air Force. After his pilot training, he flew jet fighters at various US Air Force bases, including France from 1954 to 1957. Back in the USA he worked as an instructor and from 1960 as a test pilot at Edwards Air Force Base in California.

Collins had applied for NASA’s second astronaut group, but was not accepted. He participated again in the next round and was successful this time. Collins was one of the 14 astronauts presented to the public on October 18, 1963. In February 1965 he took over the special field “space suits and outer space activities”. He was also involved in the selection of the companies that produced the space suits for NASA. In July 1965 he was assigned as backup crew member for Gemini 7’s long-term flight in December together with Ed White, who was, after Alexei Archipovich Leonov, the second man and the first US astronaut to float freely in space with Gemini 4. This made Collins the first astronaut in the third group to be nominated for a space flight, but he was not deployed.

Next to the Apollo program, Michael Collins was part of the Gemini 10 crew, along with John Young. As White moved on to the Apollo program after Gemini 7, Collins was assigned to the prime crew of Gemini 10 along with John Young. On their three day’s mission, the crew was obligated to perform two EVAs and 15 different experiments. This flight took place from 18 July to 21 July 1966 and was the first in which both a docking and a space exit were carried out. In Earth orbit, Collins left the spacecraft to photograph Earth and stars. He undertook a second outboard mission to get a plate from an Agena target satellite, which had been in orbit for several months, to determine the micrometeoroid activity. This made Collins the first astronaut to leave the spacecraft twice during a space flight and the first to move from one missile to another in space.

After Gemini 10, Collins was assigned to the backup crew for the second manned Apollo flight, with Commander Frank Borman, Command Module Pilot Thomas Stafford and Collins as Lunar Module Pilot. However, Apollo 2 was canceled and Michael Collins was soon moved to the Command Module Pilot position on the Apollo 8 prime crew. Unfortunately, in 1968, Michael Collins faced some medical problems and was diagnosed with cervical disc herniation which required surgery. Collins was made capsule communicator of Apollo 8, meaning that he was stationed at Mission Control responsible for communicating directly with the crew during a mission. He covered the launch phase up to translunar injection, the rocket burn that sent Apollo 8 to the Moon as part of the Green Team. 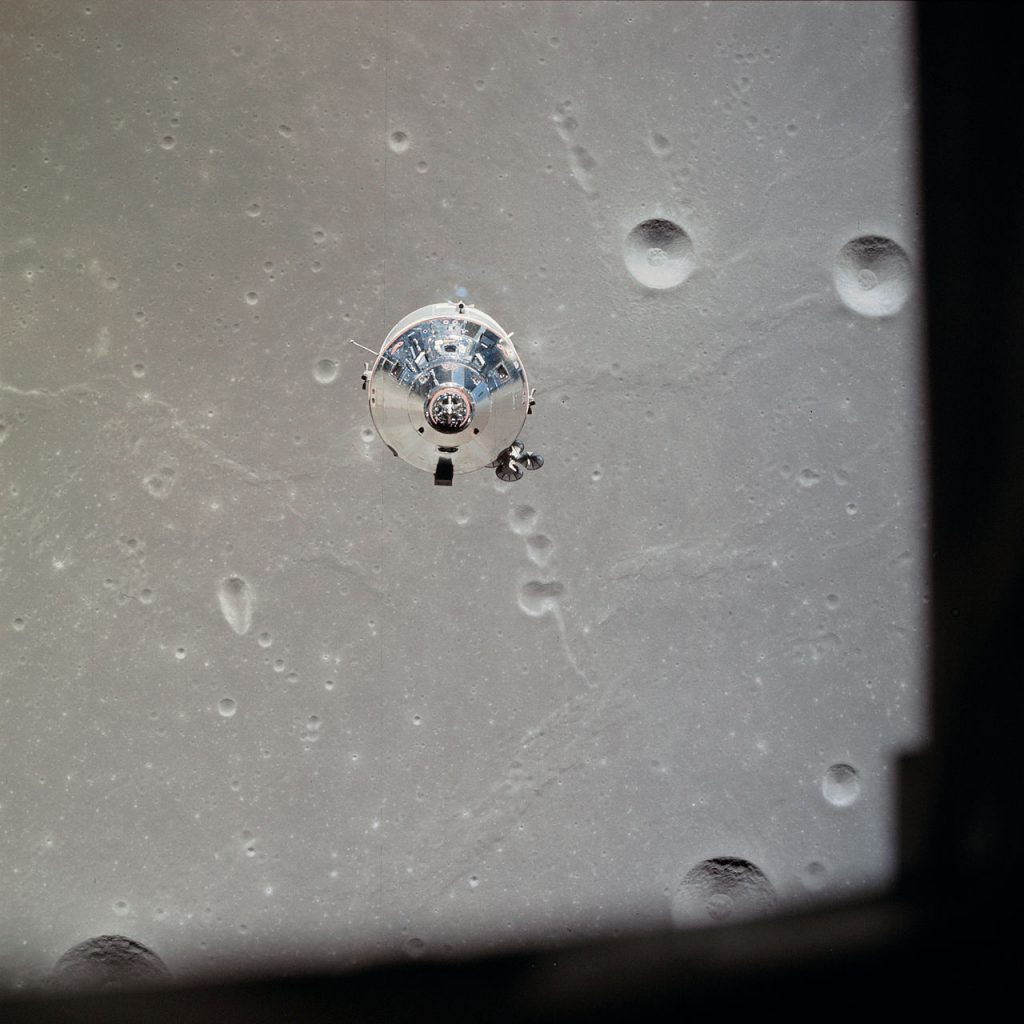 Columbia in lunar orbit and piloted by Collins alone, photographed from Eagle

The successful completion of the first manned circum-lunar flight was followed by the announcement of the Apollo 11 crew of Armstrong, Aldrin, and Collins. Collins also designed the mission badge of Apollo 11, which depicted an eagle landing on the moon. Apollo 11’s flight took place from 16 July to 24 July 1969. While Armstrong and Aldrin descended to the lunar surface on the Eagle ferry and became the first humans on the moon, Collins remained alone in orbit. During his day of solo flying around the Moon, Collins never felt lonely and during the 48 minutes of each orbit that he was out of radio contact with Earth, the feeling he reported was not loneliness, but rather “awareness, anticipation, satisfaction, confidence, almost exultation”. One of Collins’ first tasks was to identify the lunar module on the ground. To give Collins an idea where to look, Mission Control radioed that they believed the lunar module landed about four miles off target. Each time he passed over the suspected lunar landing site, he tried in vain to find the lunar module. On his first two orbits on the far side of the Moon, Collins performed maintenance activities such as dumping excess water produced by the fuel cells and preparing the cabin for Armstrong and Aldrin to return. Columbia orbited the Moon thirty times. After the Apollo 11 flight, Collins received an offer to become Apollo 14’s replacement commander, with the prospect of entering the moon himself as Apollo 17’s commander. But Collins refused.

Collins left NASA the following year and served as Assistant Secretary of State for Public Affairs at the US State Department from June 1970 to April 1971. Collins then became the first director of the National Air and Space Museum of the Smithsonian Institution in Washington, D.C. His role was to advance the planning and construction of the new museum building. The inauguration took place on July 1, 1976, shortly before the 200th anniversary of the USA. The construction time was shorter than planned, and the cost was lower than estimated. In 1978, Collins took over other senior positions within the Smithsonian Institution. In the same year he left the US Air Force in the rank of Brigadier General. From 1980 to 1985 he worked for LTV Aerospace & Defense, since then he has run his own consulting firm, Michael Collins Associates. He wrote an autobiography in 1974 entitled Carrying the Fire: An Astronaut’s Journeys. Further published works by Collins include Liftoff: The Story of America’s Adventure in Space, Mission to Mars, and Flying to the Moon and Other Strange Places. For quite a long time, Collins served as trustee of the National Geographic Society and is a fellow of the Society of Experimental Test Pilots, and a fellow of the American Institute of Aeronautics and Astronautics. Michael Collins is also one of 82 astronauts who supports the Asteroid Day campaign which was co-founded by Apollo 9 astronaut Rusty Schweickart and astrophysicist and Queen guitarist Brian May.