You are here: Home › literature › August Wilhelm Schlegel and his Shakespeare Translations 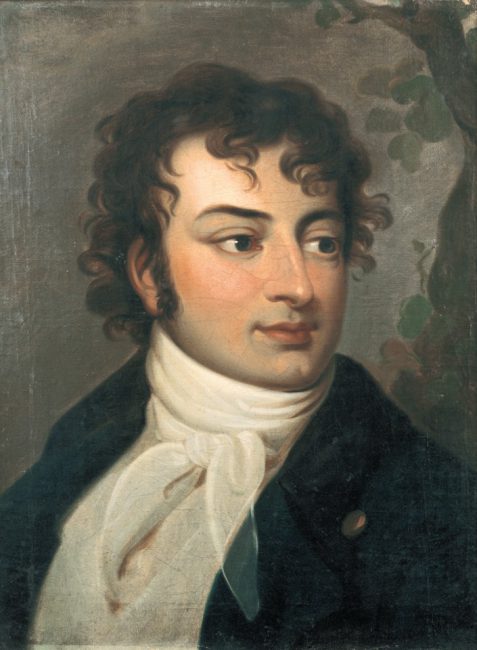 On September 8, 1767, German poet, translator, and critic August Wilhelm Schlegel was born, who became a foremost leader of German Romanticism. He is best known for his translations of Shakespeare‘s works into German.

“The poetry of the ancients was that of possession, ours is that of longing, which is firmly rooted in the present, which is caught between memory and punishment.”
– August Wilhelm Schlegel, Lectures on dramatic art and literature, (1846)

The Son of a Lutheran Pastor

August Wilhelm Schlegel was the fourth son of the Lutheran pastor Johann Adolf Schlegel, who originally came from Saxony. His father was pastor at the Marktkirche in Hannover. His mother Johanna Christiane Erdmuthe Hübsch (1735-1811) was the daughter of a mathematics teacher in Schulpforta. The couple had eight sons and two daughters. In the family there was an artistically and intellectually open-minded environment. August graduated from the grammar school in Hannover, followed by the University of Göttingen, where he enrolled in 1787. At first, he studied theology, changing to classical philology and aesthetics later on. Around 1790 his youngest brother Friedrich moved to him in Göttingen. The two brothers were influenced by Johann Gottfried Herder, Immanuel Kant, Tiberius Hemsterhuis, Johann Joachim Winckelmann and Karl Theodor von Dalberg. August Wilhelm Schlegel undertook a partial translation of Dante‘s Divina Commedia and a translation of Shakespeare’s A Midsummer Night’s Dream (1789). In 1791 he finished his studies.

Shakespeare an d the Athenaeum

After Schlegel had worked in Amsterdam for a while as a teacher, he moved to Jena in order to work as a literary critic and write for Friedrich Schiller’s short-lived periodical Die Horen.[5] He married in 1796 and his wife, Caroline Michaelis, highly motivated him to start his projects translating Shakespeare‘s plays, in which she also participated. In 1798, August Wilhelm and his brother Friedrich Schlegel founded the famous Athenaeum, being tired of the publishing troubles back then. The brothers were both, editors and main writers of the journal and they managed to become one of the German Romantic Movement‘s principal voices. The Athenaeum was devoted mainly to literary criticism with a philological and historical perspective, and a large section of it featured the review of contemporary literature. It contained critical essays, fragments, letters, announcements and dialogues and appeared twice a year between 1798 and 1800 [1,3].

Translations of Shakespeare and others

Also in 1798, Schlegel was appointed professor at the University of Jena and there, he had the chance to continue his translation of the works of Shakespeare.[4] Schlegel managed to translated over 16 Shakespearean plays, five plays from the Spanish dramaturge Calderón de la Barca,[6] and other selected pieces from Dante, Petrarch, Giovanni Boccaccio, Miguel de Cervantes, Torquato Tasso, and Luís de Camões which were published in 1804 as “Blumensträusse italiänischer, spanischer, und portugiesischer Poesie” (Bouquets of Italian, Spanish, and Portuguese Poetry) [2]. The poet, translator, and critic also became well known for his great teaching abilities. Schlegel moved to Berlin in the early 19th century and his lectures were highly didactic while at the same time interspersed with important philosophical insights. Some of his lectures were later on also published in literary journals.

In the spring of 1802 Caroline and August Wilhelm Schlegel decided to dissolve their marriage. This only succeeded after overcoming several obstacles on May 17, 1803, when Caroline married Friedrich Schelling soon after. After the dissolution of the marriage, Schlegel was literary advisor and secretary to Madame de Staël until 1817,[7] who had recently separated from the writer Benjamin Constant. With Madame de Staël, with whom he was obviously unhappily and jealously in love[26], Schlegel went to Dresden and Weimar in May 1808. Since he was accused of being an opponent of Napoleon, France and French literature, he was expelled by the prefect from the entire French Empire, even from Coppet. In 1811 he completed his poetic activity by and large with the two-volume collection of his poetic works. In 1818, Schlegel was appointed professor of literature and art history in Bonn, where he published the scholarly journal ‘Indische Bibliothek‘ and set up a Sanskrit printing press with which he provided the first printed editions of the Bhagavadgita in continental Europe [1].

The Rediscovery of Shakespeare

The rediscovery of Shakespeare‘s greatness in the 19th century was due, not only to Schlegel‘s translations, but most importantly to his special approach to Shakespearean theatre. Schlegel claimed that it should be analyzed on the grounds of constituting a necessary historical difference. This difference between the ancients and the modern was the cornerstone of Schlegel‘s critique and set the basis for his theoretical use of the concept Romantic, which became the key-concept in his comprehension and reevaluation of modernity [1].

As he grew older, the famous Schlegel often became the target of criticism (for example from his student Heinrich Heine), who ridiculed his vanity and marriage to Sophie Paulus. His lectures on the theory and history of the fine arts held in Berlin in 1827 were a failure. The rift that arose between the brothers was no longer bridged and led to August Wilhelm’s public distancing from Frederick in 1828. In 1841 he travelled again to Berlin for the publication of the Collected Works of Frederick the Great, but returned to Bonn after one semester. August Wilhelm Schlegel died in Bonn on May 12, 1845. He is regarded as the most important philosopher of language in early German Romanticism and as a co-founder of ancient Indian philology.