You are here: Home › astronomy › Sir William Herschel and the Discovery of Uranus 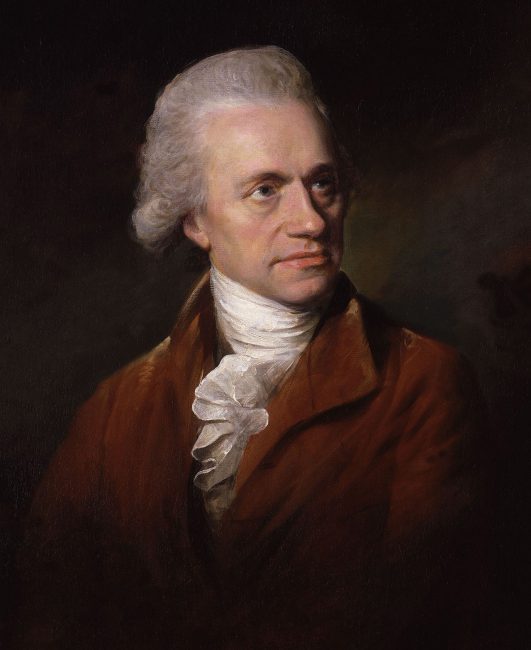 On March 13, 1781, Sir William Herschel for the first time observed planet Uranus while in the garden of his house at 19 New King Street in the town of Bath, Somerset, England (now the Herschel Museum of Astronomy), but initially reported it (on April 26, 1781) as a “comet“.

From Hannover to England

Friedrich Wilhelm Herschel was the son of the military musician Issak Herschel and Anna Ilse Moritzen. Friedrich Wilhelm joined the Kur-Hannover footguard at the age of 14 as an oboist and violinist. Already at a young age he became interested in mathematics and languages. At the outbreak of the Seven Years’ War, before the French troops occupied Hanover in 1757, his regiment was transferred to England, which at that time was connected with his home country Hanover in personal union. In the autumn of 1756 he returned with the regiment to his homeland, but in the same year, after leaving the army, he returned to London with his brother Jacob Herschel, who was also a musician.

During his life time, he composed musical works, including 24 symphonies as well as several concertos and church music. His musical career got more serious, when Herschel moved to Sunderland in 1761, where he was hired as the first violin for the Newcastle orchestra. The city of Bath (Somerset) was one of the centres of social and cultural life in England at that time. Wilhelm Herschel soon joined the local orchestra, which was one of the best in England, and became its leader in the same year. At the same time he became organist of the Bath Octagon Chapel in October 1766. Outside the season in Bath he gave guest performances with his orchestra at the Theatre Royal in Bristol, among other places; there and in Bath he conducted the oratorio performances during Lent. He wrote the majority of his larger compositions between 1759 and 1769. His sister, Caroline Herschel was often invited as a soprano soloist there.[6]

However, through his life as a musician, Herschel gained his interest in lenses and mathematics. This also led to his interest in astronomy and he began constructing his first reflecting telescopes. It was recorded, that Herschel spent around 16 hours daily polishing and grinding and his first serious observation attempts were recorded in his astronomical journal. It is assumed, that in 1779, Herschel started his systematic search for Double Stars and listed his new discoveries until 1792. Five years later, he discovered changes in their relative positions that could not be attributed to the parallax caused by the Earth’s orbit and announce the hypothesis that the two stars might be “binary sidereal systems” orbiting under mutual gravitational attraction in 1802. His hypothesis was confirmed one year later and his theoretical and observational work in this field provided the foundation for modern binary star astronomy. 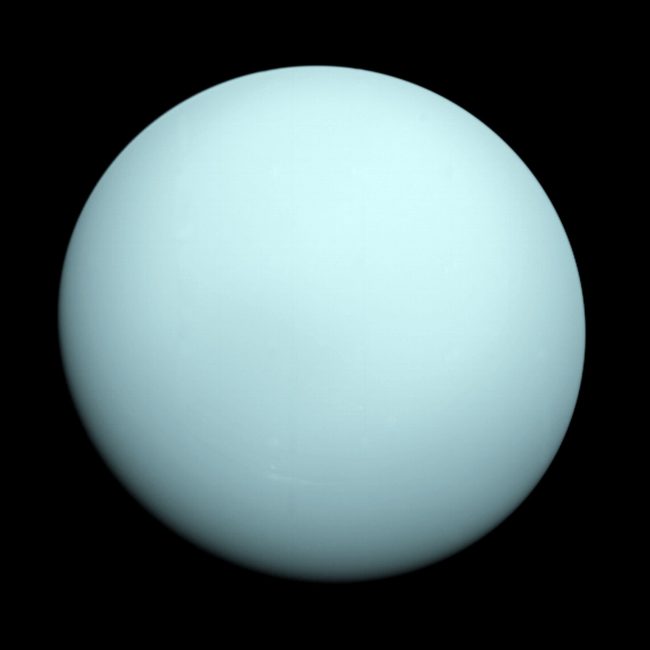 Uranus, discovered by William Herschel in 1781

“I compared it to H Geminorum and the small star in the quartile between Auriga and Gemini, and finding it so much larger than either of them, suspected it to be a comet.”
– William Herschel’ss discovery of Uranus. Scientific Papers, vol. 1, page 30 “Account of a Comet”.

Planet Uranus is visible with the naked eye and moves around the Sun very slowly, wherefore it was not recognized as an actual planet after the telescope was invented. John Flamsteed, the first Astronomer Royal even categorized the planet as the star ’34 Tauri’.[7] William Herschel, back then only amateur astronomer discovered Uranus on 13 March 1781 with his self built telescope. However, he recognized Uranus but mistook the planet for a comet, since he did not think that there could be more planets then the so far discovered six. After three months, his discovery was accepted as a planet and confirmed by Pierre-Simon Laplace [8] and Anders Johan Lexell.[9] Herschel called the new planet the “Georgian star” (Georgium sidus) after King George III.  However, the name did not stick. In France, where reference to the British king was to be avoided if possible, the planet was known as “Herschel” until the name “Uranus” was universally adopted. About six years after his famous discovery, William Herschel also discovered Uranus’ biggest moons Titania and Oberon. Herschel was awarded the Copley Medal and elected a Fellow of the Royal Society. In 1782, he was appointed “The King’s Astronomer“. After William Herschel and his sister moved to Datchet, he continued making telescopes. It is assumed that he sold around 60 of them. 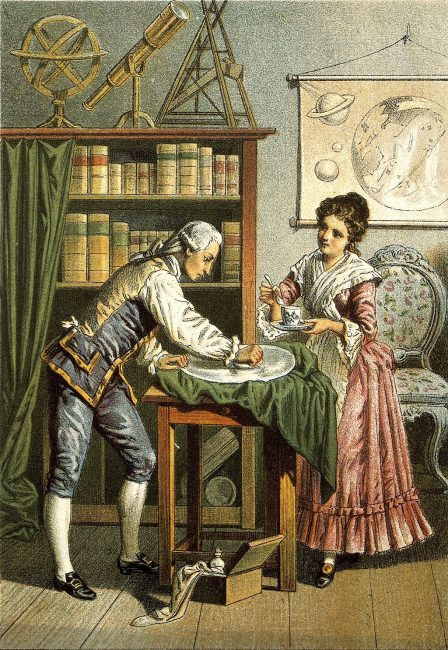 From 1782 to 1802, and most intensively from 1783 to 1790, Herschel conducted systematic surveys in search of “deep sky” or nonstellar objects. Excluding duplicated and “lost” entries, Herschel ultimately discovered over 2400 objects defined by him as nebulae, which he furthermore published in  three catalogues: Catalogue of One Thousand New Nebulae and Clusters of Stars (1786), Catalogue of a Second Thousand New Nebulae and Clusters of Stars (1789) and the  Catalogue of 500 New Nebulae … (1802). 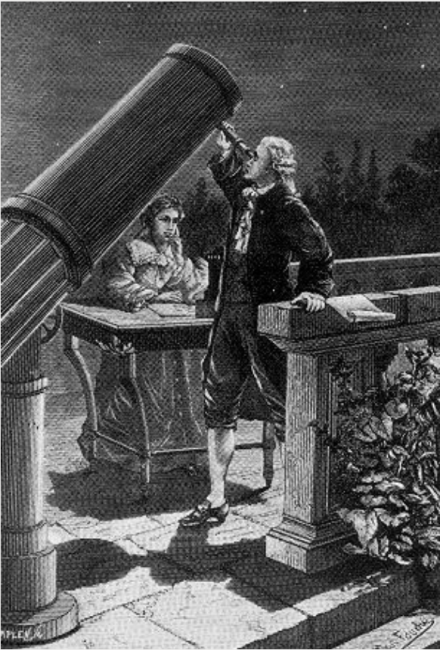 “I have made it a rule never to employ a larger telescope when a smaller will answer the purpose.”
– Sir William Herschel: His Life and Works (1880) Ch.4

During his career, he constructed more than four hundred telescopes. The largest and most famous of these was a reflecting telescope with a 1.26 m primary mirror and a 12 m focal length. Because of the poor reflectivity of the speculum mirrors of that day, Herschel eliminated the small diagonal mirror of a standard newtonian reflector from his design and tilted his primary mirror so he could view the formed image directly. This design has come to be called the Herschelian telescope. In 1789, shortly after this instrument was operational, he discovered a new moon of Saturn: Mimas 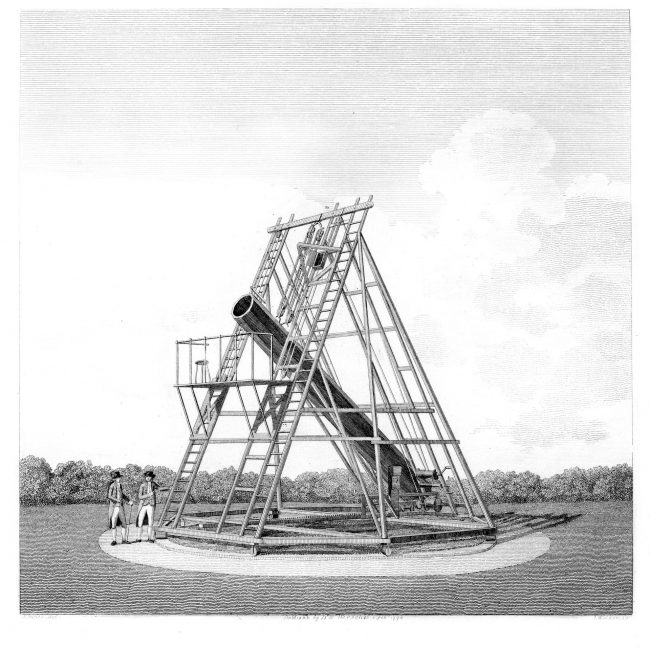 Print of the twenty-foot reflecting telescope of William Herschel, published 1794.

Herschel was sure that he had found ample evidence of life on the Moon and compared it to the English countryside. He did not refrain himself from theorizing that the other planets were populated with a special interest in Mars, which was in line with most of his contemporary scientists. At Herschel’s time, scientists tended to believe in a plurality of civilized worlds; in contrast, most religious thinkers referred to unique properties of the earth.