You are here: Home › astronomy › Johann Elert Bode and the Titius-Bode Law 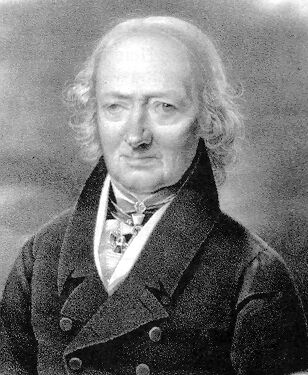 On November 23, 1826, German astronomer Johann Elert Bode passed away. Bode is best known for his popularization of the Titius-Bode‘s law, a hypothesis that the bodies in some orbital systems, including the Sun‘s, orbit at semi-major axes in a function of planetary sequence. The formula suggests that, extending outward, each planet would be approximately twice as far from the Sun as the one before.

Johann Elert Bode was born in Hamburg, Germany, the son of Johann Jakob Bode, a merchant in Hamburg, and his wife Anna Margarethe b. Kruse, as the first among nine siblings. As a youth, he suffered from a serious eye disease which particularly damaged his right eye; he continued to have trouble with his eyes throughout his life. Educated primarily by his father, who wanted him to become his successor in the family’s merchant business, Bode became interested in mathematics, geography and, eventually in astronomy.

His early promise in mathematics brought him to the attention of Johann Georg Büsch, a professor of mathamatics at the Hamburg Academic “Gymnasium,” who was impressed by Bode’s amateur calculations. Büsch allowed Bode to use his own library as well as his instruments for study. He began his career with the publication of a short work on the solar eclipse of 5 August 1766. Among his early observational highlights were the observation of the transit of Venus on June 3, 1769, the independent co-discovery of the comet of 1769 (C/1769 P1 Messier), and the observation of the comet of 1770 (P/Lexell).[2] This was followed by an elementary treatise on astronomy entitled Anleitung zur Kenntniss des gestirnten Himmels (Instruction for the Knowledge of the Starry Heavens, 1768), the success of which led to his being invited to Berlin by Johann Heinrich Lambert in 1772 for the purpose of computing ephemerides on an improved plan as a calculator, with the title of a Professor, at the Berlin Academy of Sciences. There he founded, in 1774, the well-known Astronomisches Jahrbuch, 51 yearly volumes of which he compiled and issued.

His name became attached the ‘law’ discovered by Johann Daniel Titius in 1766.[5] Bode first makes mention of it in the Anleitung zur Kenntniss des gestirnten Himmels in a footnote, and although it is often officially called the Titius–Bode law, it is also commonly just called Bode’s law. This law attempts to explain the distances of the planets from the Sun in a formula although ironically it breaks down for the planet Neptune which was later discovered in Berlin. It was the discovery of Uranus at a position predicted by the law which aroused great interest in it. There was actually a gap (with no planet) between Mars and Jupiter, and Bode urged a search for a planet in this region which culminated in a group formed for this purpose, the so-called “Celestial Police”. However before the group initiated a search, they were trumped by the discovery of the asteroid Ceres by Giuseppe Piazzi from Palermo in 1801,[3] at Bode’s predicted position. Later, the law fell out of favor when it was realized that Ceres was only one of a small number of asteroids and when Neptune was found not to be in a position required by the law. The discovery of planets around other stars has brought the law back into discussion. 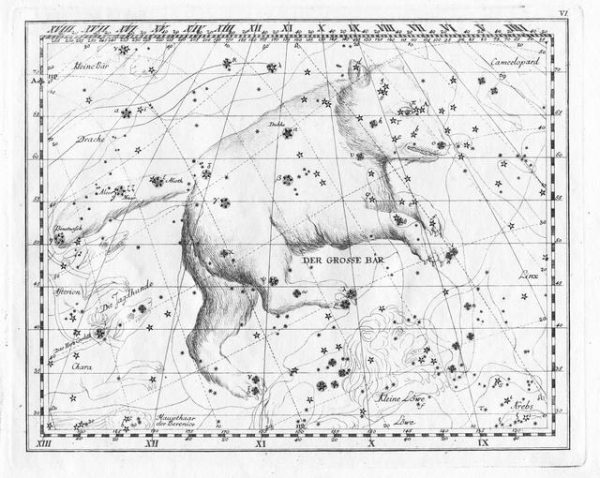 Section of a plate from Uranographia showing the constellation Ursa Major

In late 1774, Bode started to look for nebulae and star clusters in the sky, and observed 20 of them in 1774-1775. Among them are three original discoveries: M81 and M82.[2] Bode became director of the Berlin Observatory in 1786, from which he retired in 1825.[3] There he published the Uranographia in 1801, a celestial atlas that aimed both at scientific accuracy in showing the positions of stars and other astronomical objects, as well as the artistic interpretation of the stellar constellation figures. The Uranographia marks the climax of an epoch of artistic representation of the constellations. Later atlases showed fewer and fewer elaborate figures until they were no longer printed on such tables.

Bode also published another small star atlas, intended for astronomical amateurs (Vorstellung der Gestirne). He is credited with the discovery of Bode’s Galaxy (M81). Comet Bode (C/1779 A1) is named after him; its orbit was calculated by Erik Prosperin. Asteroid 998 Bodea, discovered 1923 August 6 by Karl Reinmuth at Heidelberg, was also christened in his honour, the letter ‘a’ added to its name to fulfil the convention that asteroids were given feminine names.

Neither Georgium Sidus, nor Herschel’s Planet

Bode was greatly interested in the new planet discovered by William Herschel in March 1781 [4]. While Herschel always referred to this planet as “Georgium Sidus” to honor King George III of England, and Messier called it “Herschel” or “Herschel’s Planet,” and Peitnet de Sevoy, “Cybele,” Bode proposed the name “Uranus,” which was soon adopted by the rest of the world. Bode collected virtually all observations of this planet by various astronomers, published many of them in the Astronomisches Jahrbuch, and found that Uranus had been observed before its discovery on a number of occasions, among them an observation of Tobias Mayer from 1756, and earliest by Flamsteed, in December 1690, cataloged as “star” 34 Tauri.[2] In 1789, Bode’s Royal Academy colleague Martin Klaproth was inspired by Bode’s name for the planet to name his newly discovered element “uranium”.

From 1787 to 1825 Bode was director of the Astronomisches Rechen-Institut. In 1794, he was elected a foreign member of the Royal Swedish Academy of Sciences. In April, 1789 he was elected a fellow of the Royal Society. In 1825, after almost 40 years, Bode retired from the post of a director of the Berlin Observatory, and was succeeded by Johann Franz Encke. Johann Elert Bode died on November 23, 1826 in Berlin, aged 79. The moon crater Bode and the dwarf planet (998) Bodea were named after Bode.