You are here: Home › physics › Sir William Crookes and the Fundamentals of Luminescence 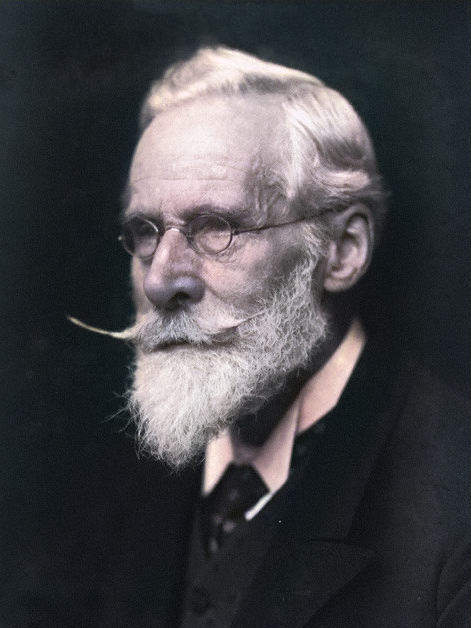 William Crookes was born in London, the eldest son of the second wife of Joseph Crookes, a very wealthy tailor. He attended high school until the age of 16, when he transferred to the Royal College of Chemistry, where August Wilhelm von Hofmann taught. At the age of nineteen, Crookes became an assistant to Hofmann at the school. A year earlier, after experiments with selenium cyanide, he had already found a curious residue that was only later characterized as the new chemical element thallium. In 1854, Crookes obtained a position as meteorologist at the Ratcliffe Observatory in Oxford and, in the same year, an apprenticeship as a chemist in Chester. In 1856 he married Ellen Humphrey and in 1857 he became secretary of the Photographic Society in London.

In addition to his work as a scientist, William Crookes also worked as a journalist. In 1859 he founded the Chemical News, of which he was editor for many years. Subsequently, he dealt with luminous phenomena in electron tubes and researched rare earths, which he tried to separate chemically. Another field of activity in which Crookes was active around 1900 was radioactivity. He investigated substances such as uranium and dealt with substances that enabled him to detect radioactivity. During his life, William Crookes received many honors and awards, becoming a member of the Royal Society in 1863 and knighted in London in 1897. In 1910 he received the Order of Merit. In the last years of his life it could be seen that Crookes, like some of his scientific colleagues, was fond of spiritualism. He also belonged to the Theosophical Society and called himself a parapsychologist.

In 1859, Robert Bunsen [1] and Gustav Robert Kirchhoff [2] developed spectral analysis. Now Crookes was able to detect the chemical element thallium in his earlier selenium separations during spectroscopic experiments – at the same time as Claude Auguste Lamy. It is named after the Greek word thallos (“green shoot”) because of the green light effect in spectral analysis. He determined the weight of the element and found an atomic weight of 204.04 u.[9] In his weighings he found very small anomalies. These were due to the pressure effect of the light on the evacuated suspended leaves in the balance box and the pressure change due to temperature influence according to the kinetic theory of gases. These radiometer forces leading to attraction or repulsion are based on electromagnetic radiation like light. A gadget still sold in some stores today, the so-called “light windmill” or “light mill,” was invented by Crookes in 1873. The device is also called a radiometer in English-speaking countries.

Experiments with Cathode Rays and Plasma

Along with Wilhelm Hittorf, Crookes was also concerned with cathode rays. In a strongly evacuated glass tube, Crookes was able to detect the cathode rays as a shadow-casting cross (in the shadow-cross tube) by a special construction of the anode (made of aluminum). Cathode rays – unlike channel rays – are similarly invisible as sound waves, but when they hit glass or other materials, a fluorescent glow occurs. By improving the vacuum, Crookes was able to achieve very straight cathode rays, believing he could observe radiating atoms or matter in a special state. Crookes called this radiating kind of matter a fourth state of matter. In this state matter and force merge into each other. Thus he set the mental basic building blocks for the later Einstein energy formula. Different types of vacuumed glass bulbs showing different effects of cathode rays are called Crookes tubes.

Before that, W. Hittorf had already described the cathode rays, but without being able to gain the necessary attention. The cathode rays found the interest of many other scientists. Heinrich Hertz [3] discovered in 1892 that cathode rays can penetrate very thin layers of solid materials. Philipp Lenard extended the experiment, by drilling a small hole in the anode and covering it with a thin aluminum foil (Lenard window). The rays penetrated the thin foil and also the glass wall, causing a substance outside the tube to glow. Lenard had detected the free electrons. Joseph John Thomson [4] exposed the cathode rays to a magnetic field. These experiments later led to the determination of the mass of charge carriers and to mass spectroscopy.

Crookes continued to study the plasma state in evacuated glass tubes under high voltage. He developed what became known as Crookes’ light tube, which laid the foundation for the mass production of fluorescent tubes. From 1881, Crookes investigated the influence of cathode rays on chemical substances. He observed the fluorescent light (luminescent light) emitted by the substances under the influence of the cathode rays. By means of spectral analysis, he now clarified the spectra of numerous substances. Hereby Crookes created the bases for the X-ray spectroscopy.

In spectra observations of rare earths and other metals, Crookes could observe very many different spectral lines. He assumed that a chemical element has not only one atomic weight, but consists of atoms with different atomic weights, whereby a certain atomic weight can also clearly predominate. The later work of Soddy, Fajans, Aston, who were able to determine different atomic weights for an element with the same nuclear charge number (proton number) by means of mass spectroscopy, was based on these considerations. Crookes’ hypothesis that a chemical element is composed of atoms of different mass was thus confirmed.

Inspired by the discoveries of Marie [7] and Pierre Curie [5] and Henri Becquerel,[8] Crookes turned to uranium salts around 1900. He precipitated a high-radiation uranium compound (uranium X) from the uranium salt with ammonium carbonate solution. The dissolved uranium salt no longer showed radioactivity on the photographic plate. Later, Sir Ernest Rutherford and Frederick Soddy developed a theory on nuclear decay caused by emission of α-radiation and transformation into an atom of another element. Kasimir Fajans was able to elucidate the exponential function of the β-decay of a radioactive element by means of uranium X. In 1903, Crookes – at the same time as Julius Elster and Hans F. K. Geitel – was able to detect radioactive radiation using scintillation substances such as zinc sulfide. Crookes developed a small apparatus, a spinthariscope,[10] for detecting nuclear decays. In 1900, he discovered the thorium isotope 234Th, providing the first evidence that radioactivity involved the transformation of one element into another.

In 1866, he was entrusted by the government with a paper on disinfectants for cattle disease. He pointed out the value of phenols in disinfection. In 1870 Crookes published a paper on beet sugar manufacture. In 1899 he dealt with the sewage question. This was followed in 1908 by a paper on the manufacture of artificial diamonds. In 1910 he wrote a monograph on scandium. Starting in 1910, he developed types of glass for protective goggles against ultraviolet rays in glass manufacturing. Crookes was interested in spiritualism and experimented with numerous mediums, including Daniel Dunglas Home and Florence Cook. He was a member of the Theosophical Society and published several articles in the Theosophical journal Sphinx.