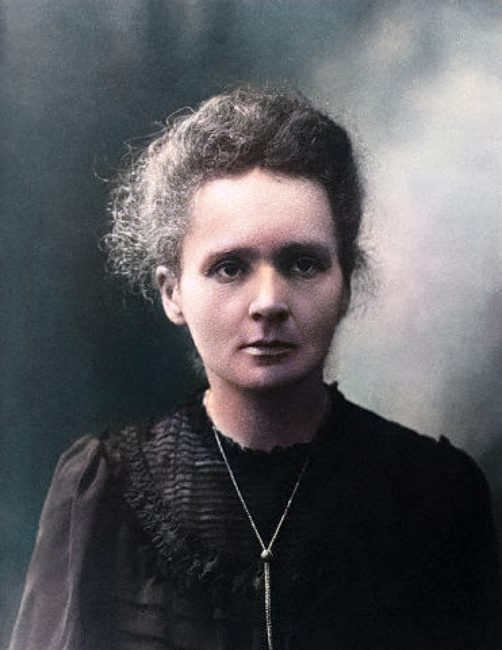 “One never notices what has been done; one can only see what remains to be done.”
— Marie Curie, Letter to her brother (1894)

Maria Salomea Skłodowska was the youngest of five children of the teacher couple Bronisława and Władysław Skłodowski, who both came from the lower Polish land nobility, the Szlachta, and belonged to the Polish intelligentsia. Their father Władysław had studied at the University of St. Petersburg and taught mathematics and physics at various state and private schools, and her mother was a school principle. In 1883 Maria passed her Abitur at the age of 15 as the best of her class, but unfortunately she was not allowed to attend university as a woman in Poland. Her father’s financial situation did not allow her to be supported during her studies abroad. Thus, she participated in private lessons by her father as well as secretly some classes at a private, underground university. From September 1885 Maria worked for a short time as a house teacher for a lawyer’s family. At the end of 1885 she took over a position as a house teacher. On her free evenings she read books on physics, sociology, anatomy and physiology in order to sound out her inclinations and prepare herself for her studies. In the 1890’s, Mary had the first chances to perform chemical and physical experiments, preparing for the admission tests at the University of Paris.

At the University of Paris

On 3 November 1891 she enrolled as Maria Skłodowsk for a study of physics at the Sorbonne. Among the 9000 students at the university this year were 210 women. Of the more than 1825 students of the Faculté des sciences, 23 were female. As a foreign student, Maria had worse previous knowledge than her French fellow students, and the language problems posed an additional challenge. In July 1893, she completed her examinations for the licence des sciences physiques (physics license) as the best. In the summer she was awarded the 600 Rouble Alexandrovich Scholarship, which enabled her to continue her studies in Paris. She graduated with a degree in mathematics (licence des sciences mathématiques) in July 1894 as a second best student.

“I am among those who think that science has great beauty. A scientist in his laboratory is not only a technician: he is also a child placed before natural phenomena which impress him like a fairy tale. We should not allow it to be believed that all scientific progress can be reduced to mechanisms, machines, gearings, even though such machinery also has its beauty.”
— Marie Curie, as quoted in [9]

She kept researching after University and finally got to know Pierre Curie,[3] back then head of a laboratory, where their relationship developed from being a great research team to becoming a married couple shortly after. Nevertheless she did not stop her experiments, Marie Curie made several discoveries about the magnetism of steel and even published some of her works.

The discovery of X-rays at the end of 1895 caused a worldwide sensation and triggered numerous research activities. The ability of uranium potassium sulphate to blacken a photographic plate, which Antoine Henri Becquerel [4] discovered by chance in the spring of 1896, remained almost unnoticed. Marie Curie, who was looking for a topic for her doctoral thesis, decided to turn to “Becquerel rays” and researched on uranium. Through the research projects, which she worked on together with her husband Pierre, she was able to coin the term ‘radioactive‘ in 1898. On the basis of their experiments Marie Curie was able to conclude that “Becquerel radiation” is a property of certain atoms and not a chemical property of the compound studied.

The Isolation of Radium

Marie Curie and her husband assumed that the high activity of the pitchblende was caused by an unknown chemical element. In the following weeks, they tried to isolate this element using chemical methods. They were able to isolate the new element Radium, a breakthrough for the chemistry of the 19th century. In the autumn of 1898 Marie Curie suffered from inflammation of the fingertips, which were the first known symptoms of radiation sickness from which she later suffered.

At the beginning of 1899, the two researchers shifted their focus of work. Together with Georges Sagnac and André-Louis Debierne, Pierre Curie studied the physical effects of radioactivity. Marie Curie concentrated completely on the chemical isolation of radium. She needed large amounts of pitchblende for this. Through the mediation of Eduard Suess, the acting president of the Academy of Sciences in Vienna, she received a ton of pitchblende waste from Sankt Joachimsthal, for which she only had to pay the transport costs. The EPCI gave her permission to use a draughty shed, which had previously served as a dissecting room, for her long and physically demanding work. In July 1902 Marie Curie had obtained a decigram of radium chloride and was thus able to determine the atomic mass of radium very accurately for her dissertation entitled Recherches sur les substances radioactives (Studies on radioactive substances).

At the beginning of 1903 Marie and Pierre Curie experienced their first health problems, which they attributed to overwork. Marie Curie had a miscarriage in August 1903, which further weakened her health. When the Royal Society awarded the couple the Davy Medal on 5 November 1903, Pierre Curie had to travel alone to London to receive the prize. In mid-November, the Curies received a letter from the Swedish Academy of Sciences in which they were informed that they should receive the Nobel Prize in Physics together with Henri Becquerel “in recognition of the extraordinary achievements they had acquired through their joint research into the radiation phenomena discovered by Professor Henri Becquerel“. They did not accept the invitation to the official ceremony in December 1903, referring to their teaching duties and Marie’s poor health. They did not travel to Stockholm until June 1905, when Pierre Curie gave a Nobel lecture on radioactive substances and radium in particular.

Pierre Curie’s Tragic Death and Professorship at the Sorbonne

On 1 October 1904, Pierre Curie took up his professorship at the Chair of General Physics at the Sorbonne, created especially for him, and Marie Curie was appointed head of the scientific work (chef des travaux) of the laboratory. On April 19, 1906, Pierre Curie was stranded under the wheels of a truck and died at the scene of the accident. Marie Curie was hit hard by the loss, as she had lost both her beloved life partner and her scientific comrade-in-arms. The natural sciences faculty of the university had to decide who would take over Pierre Curie’s chair. Since Marie Curie was the most suitable candidate to continue his lectures, a commission proposed that she be given responsibility for the course (chargé de cours) and the management of the laboratory, but that the chair be left vacant. Marie Curie was the first woman to teach at the Sorbonne. The full professorship in physics was not awarded to her until two years later, on 16 November 1908, which caused even greater media attentions.

The Radium Standard and the Langevin Affair

Marie Curie and Ernest Rutherford first agreed on the creation of an international radium standard in the spring of 1910. In particular, the increased use of radium in medicine required accurate and comparable measurements. At the end of 1911, the French press began to examine Curie’s relationship with the five-year younger Paul Langevin,[5] a pupil of her husband Pierre, who died in 1906. The families were friends and occasionally spent their summer holidays together. One day after the end of the first Solvay Conference, which took place from 30 October to 3 November 1911 and in which Curie was the only woman to participate, Fernand Hauser published an article in Le Journal with the headline “A love story. Madame Curie and Professor Langevin“. The accusations made during the “Langevin affair” and the associated “flaw” accompanied Marie Curie for the rest of her life.

“Nothing in life is to be feared, it is only to be understood”
— Marie Curie

When the publications about the “Langevin affair” in the French press began, the awarding of the Nobel Prize in Chemistry was discussed in Stockholm. With the Academy’s decision on 7 November 1911 to award Marie Curie the Chemistry Prize, a Nobel Prize was awarded to a person for the second time. However, the French media only reported sparsely on this award.

After her return from Stockholm, Marie Curie’s health deteriorated. During 1913 her health improved and she was able to study the properties of radium radiation at low temperatures together with Heike Kamerlingh Onnes. In March 1913 she was visited by Albert Einstein, with whom she undertook a summer excursion to the Swiss Engadine. In October she took part in the second Solvay Conference, and in November she travelled to Warsaw to inaugurate the Radium Institute built in her honour. Despite her bad health situation, Marie Curie worked restlessly on radioactivity and its behaviors under various circumstances.

During World War I she equipped busses with mobile roentgen machines and drove them by herself to the war-front where she helped to diagnose the wounded soldiers. In the hospitals where she worked, there was an acute shortage of staff and suitable X-ray equipment, and there was insufficient electricity. These circumstances led her to the idea of creating a mobile X-ray unit to examine wounded soldiers in the immediate vicinity of the front. To one of her main goals also belonged the tough fight against cancer, wherefore she was awarded numerous times world wide. Marie Curie did not live to see her daughter Irène receive the Nobel Prize for Chemistry in 1935 together with her husband “in recognition of her synthesis of new radioactive elements“. She died on 4 July 1934 in the Sancellemoz Sanatorium near Passy (Upper Savoy) of an “aplastic pernicious anaemia”, which is presumably due to her many years of exposure to radioactive elements.

Marie Curie belongs to the extraordinary scientists of the 19th and 20th century, working restlessly to reach their goals under hard political, social, and health-wise conditions. She is probably (along with Lise Meitner) the best known female physicist of all times and deeply admired by Albert Einstein, who once noted that “Marie Curie is, of all celebrated beings, the only one whom fame has not corrupted“. In honour of Marie and Pierre Curie, the names of the chemical element Curium and the unit Curie have been chosen, the Curie is a unit of measurement for the activity of a radioactive substance.

At yovisto academic video searcj you may enjoy the video ‘The three lives of Marie Curie‘ by Dr. Serge Plattard.