You are here: Home › engineering › Henry Ford and the Ford Motor Company 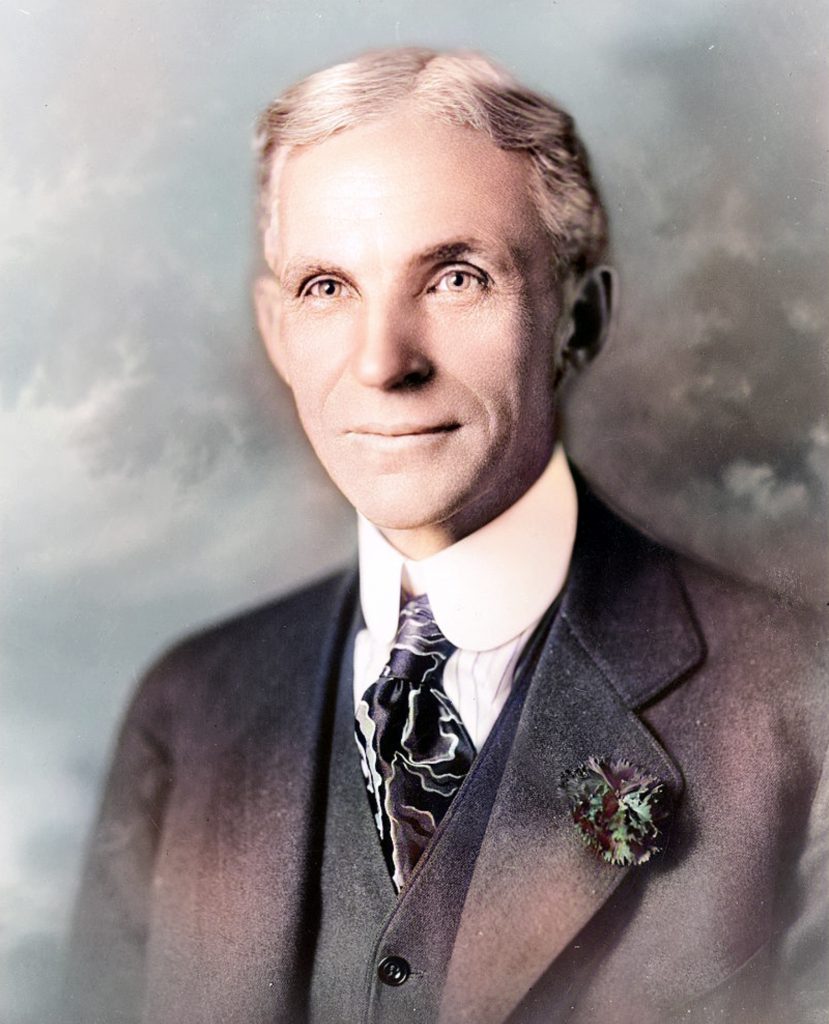 “An idealist is a person who helps other people to be prosperous.”
– Henry Ford (1919)

Born on July 30, 1863, on a farm in Greenfield Township, Michigan, Henry Ford showed his abilities as a skilled mechanic already in his early teens, when he dismantled and reassembled the timepieces of friends and neighbors. His father expected him to eventually take over the family farm, but he despised farm work. In 1879, Henry Ford left home to work as an apprentice machinist in Detroit. In 1882, he returned home to work on the family farm, where he became adept at operating the Westinghouse portable steam engine. He was later hired by Westinghouse to service their steam engines. During this period Ford also studied bookkeeping at Business College in Detroit.

In 1891, Ford became an engineer with the Edison Illuminating Company, but it were gasoline engines which attracted Ford’s attention and he began his personal experiments culminating in 1896 with the completion of a self-propelled vehicle which he named the Ford Quadricycle. Edison approved of Ford’s automobile experimentation, but backed by the capital of Detroit lumber baron William H. Murphy, Ford resigned from the Edison Company and founded the Detroit Automobile Company in 1899. However, the company was not successful and was dissolved in 1901.

With the help of C. Harold Wills, Ford designed, built, and successfully raced a 26-hp automobile in 1901 and formed the Henry Ford Company on November 30, 1901, with Ford as chief engineer. When in 1902, Murphy brought in Henry M. Leland as a consultant, Ford left the company and Murphy renamed the company the Cadillac Automobile Company. After further successful racing designs, Ford received the backing of Alexander Y. Malcomson, a Detroit-area coal dealer, and they formed Ford &amp; Malcomson, Ltd. to manufacture automobiles. Ford went to work designing an inexpensive automobile, and the duo leased a factory and contracted with a machine shop owned by John and Horace E. Dodge. Ford &amp; Malcomson was reincorporated as the Ford Motor Company on June 16, 1903, with $28,000 capital, including the Dodge brothers as investors. 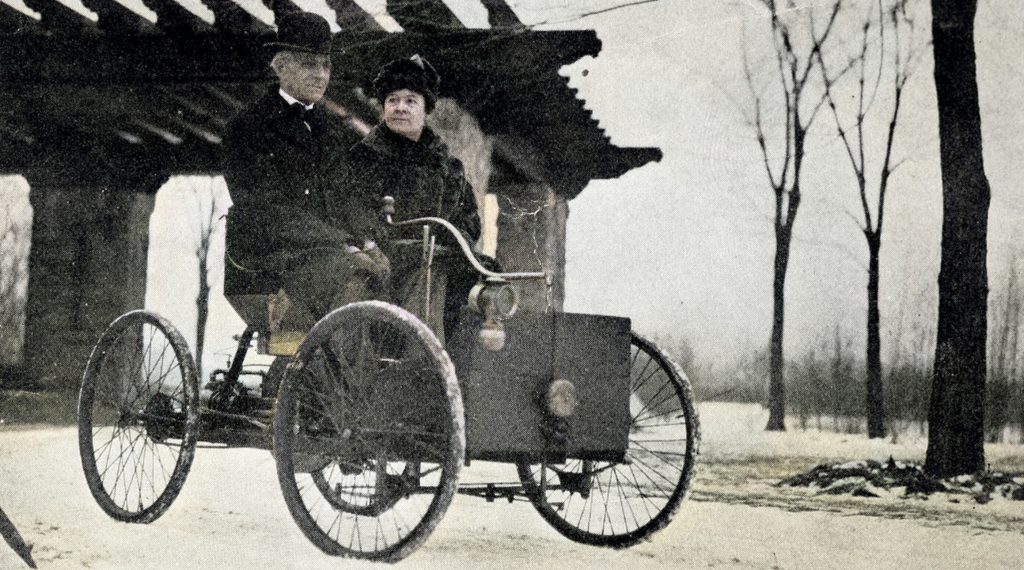 Henry Ford together with his wife in his first car, the Quadricycle

But, biggest success of the Ford Motor Company should become the Model T, introduced on October 1, 1908. It had the steering wheel on the left, which every other company soon copied. The entire engine and transmission were enclosed, the four cylinders were cast in a solid block. The car was very simple to drive, and easy and cheap to repair. Ford created a huge publicity machine in Detroit to ensure every newspaper carried stories and ads about the new car. Ford’s network of local dealers made the car ubiquitous in almost every city in North America. Always on the hunt for more efficiency and lower costs, in 1913 Ford introduced the moving assembly belts into his plants, which enabled an enormous increase in production. Although Ford is often credited with the idea, contemporary sources indicate that the concept and its development came from employees Clarence Avery, Peter E. Martin, Charles E. Sorensen, and C. Harold Wills. 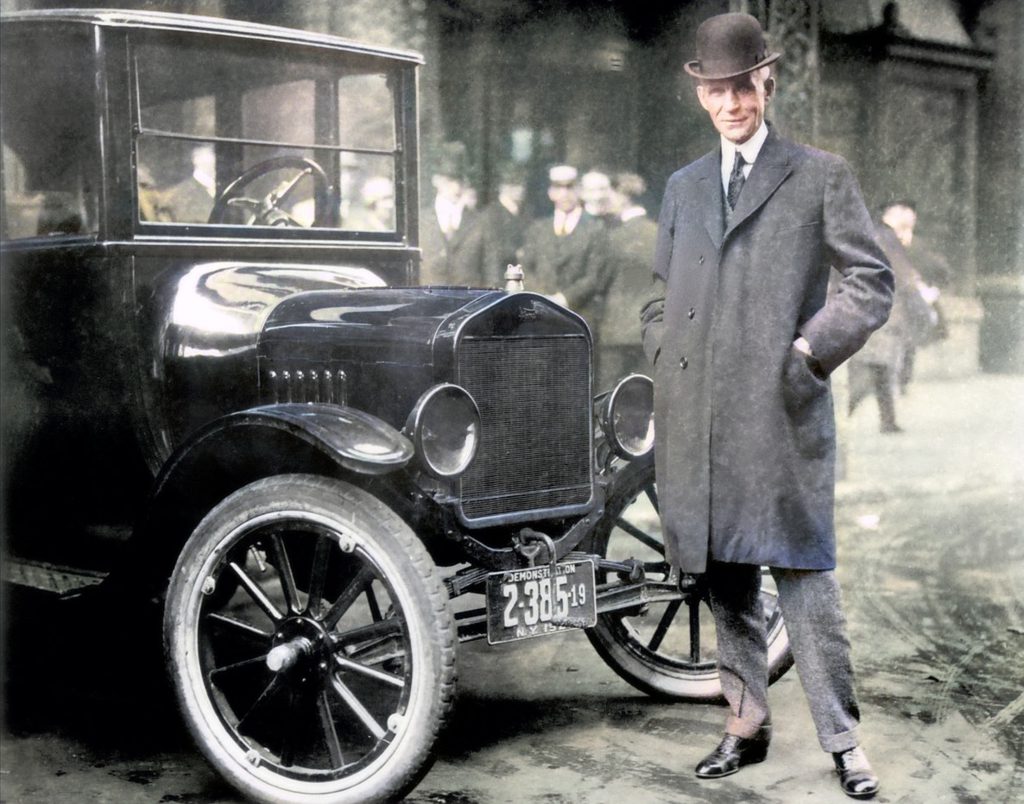 Henry Ford and his Model T

By 1918, half of all cars in America were Model T’s. All new cars were black. Interesting fact is that it was the assembly line demanding the black color because of its quicker drying time. Before that time, Model Ts were also available in other colors. The production of Model T continued as late as 1927 and the final total production was 15,007,034, a record that stood for the next 45 years. By the mid-1920s, sales of the Model T began to decline due to rising competition. Other auto makers offered payment plans through which consumers could buy their cars, which usually included more modern mechanical features and styling not available with the Model T.

A Pioneer of Welfare Capitalism

Ford was a pioneer of “welfare capitalism“, designed to improve the lot of his workers. He astonished the world in 1914 by offering a $5 per day wage ($120 today), which more than doubled the rate of most of his workers. Ford’s policy proved, however, that paying people more would enable Ford workers to afford the cars they were producing and be good for the local economy. Henry Ford died in 1947 of a cerebral hemorrhage at age 83.