You are here: Home › physics › Henri Becquerel and the Discovery of Radioactivity 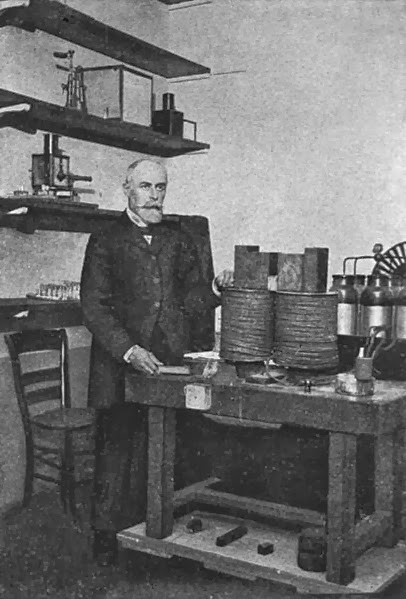 On March 1, 1896, French physicist Henri Becquerel while experimenting with X-rays and photographic plates discovered radioactivity along with Marie Curie and Pierre Curie, for which all three won the 1903 Nobel Prize in Physics.

“I developed the photographic plates on the 1st of March, expecting to find the images very weak. Instead the silhouettes appeared with great intensity. It is important to observe that it appears this phenomenon must not be attributed to the luminous radiation emitted by phosphorescence … One hypothesis which presents itself to the mind naturally enough would be to suppose that these rays, whose effects have a great similarity to the effects produced by the rays studied by M. Lenard and M. Röntgen, are invisible rays …”
— Henri Becquerel, read at French Academy of Science (2 Mar 1896). In Comptes Rendus (1896), 122, 501.

Henri Becquerel was born into a family of scientists. His grandfather Antoine César Becquerel was a pioneer in the study of electric and luminescent phenomena. His father Alexandre-Edmond Becquerel studied the solar spectrum, magnetism, electricity, and optics. The third generation physicist in the family, Henri Becquerel studied at the Lycée Louis-le-Grand. In 1872, he entered the École polytechnique, then in 1874 obtained the École d’application des Ponts et Chaussées. In 1874, he married Lucie Jamin, daughter of Jules Jamin, one of his physics teachers at the École polytechnique, with whom he had a son, Jean (1878-1953). He obtained his engineering degree in 1877, and turned to research.

Becquerel dedicated his early works in physics to the plane polarization of light, with the phenomenon of phosphorescence and absorption of light by crystals, which was also the subject of his doctoral thesis. In 1883, he studied the infrared spectrum of metal vapours, before devoting himself, in 1886, to the absorption of light by crystals. He eventually defended his doctoral thesis Research on light absorption in 1888. The following year, he was elected to the Academy of Sciences, as his father and grandfather had been before him. After his father’s death in 1892, he continued his work and ended up entering the École polytechnique in 1895, where he succeeded Alfred Potier.

However, his interest in the emission of light of one color following a body’s exposure to light of another color, phosphorescence, developed early as well. Becquerel assumed that that phosphorescent materials, such as some uranium salts, might emit penetrating X-ray-like radiation when illuminated by bright sunlight. He was highly influenced and motivated by the huge wave of excitement, that established in the scientific community, after Wilhelm Conrad Röntgen discovered X-rays in the 1890s.[5] Becquerel first heard about Roentgen’s discovery in January 1896 at a meeting of the French Academy of Sciences. After learning about Roentgen’s findings, Becquerel began connecting the two fields of research and started preparing experiments. 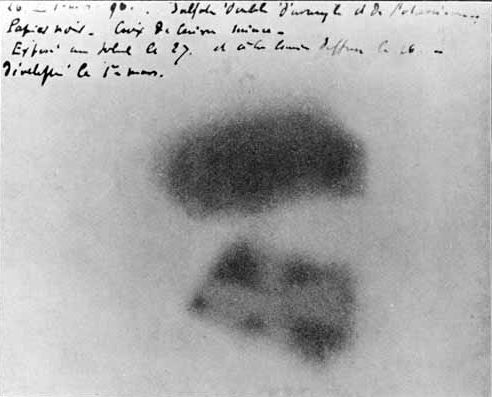 Photographic plate made by Henri Becquerel showing effects of exposure to radioactivity.

In 1896, Becquerel discovered radioactivity by chance, while researching the fluorescence of uranium salts. He wrapped photographic plates in black paper so that sunlight could not reach them. Then, Becquerel placed the crystals of uranium salt on top of the wrapped plates, and put the whole setup outside in the sun. When he developed the plates, he saw an outline of the crystals. He also placed objects such as coins or cut out metal shapes between the crystals and the photographic plate, and found that he could produce outlines of those shapes on the photographic plates. As a result, Becquerel assumed that his idea was correct and that the phosphorescent uranium salts absorbed sunlight and emitted a penetrating radiation similar to x-rays.

On February 24, 1896, he submitted his research results the French Academy of Science, but longed for more confirmation of what he had found. He continued his experiments, even though the weather started to change against his favor (as he thought). Disappointed about the situation, Becquerel put his uranium crystals and photographic plates away in a drawer, which he reopened on March 1. To his big surprise, the image was now amazingly clear. The day after, Becquerel reported at the Academy of Sciences that the uranium salts emitted radiation without any stimulation from sunlight.

…and One of the Most Important Findings in Physics

This accidental discovery belongs to one of the most important findings in physics, but until this day it it not clear, why Becquerel even developed the plates even though he expected no good result. However, two months later, he figured out that it was indeed the element uranium that emitted the radiation and that his rays could be deflected by electric or magnetic fields. In the following years, Marie and Pierre Curie figured out how to measure the intensity of the radioactivity, and soon found other radioactive elements: polonium, thorium and radium.[7] Furtherly, the rays were separated into alpha, beta and gamma radiation by Ernest Rutherford.[6] In 1903, Becquerel and the Curies shared Nobel Prize for their work on radioactivity.

In 1900 he proved in further research that the fast electrons escaping from the atomic nucleus (β radiation) are magnetically deflectable. In 1903, after the discovery of polonium and radium by Marie and Pierre Curie, Becquerel received half of the Nobel Prize in Physics (the other half was awarded to the Curie spouses) “in recognition of the extraordinary services he rendered in discovering spontaneous radioactivity“. In 1908, he became a foreign member of the Royal Society. He died some time later at the age of 55, at the Pen Castel manor house, a property that his in-laws, the Lorieux, owned at the Croisic.

Michael Short, 1. Radiation History to the Present — Understanding the Discovery of the Neutron, [11]