You are here: Home › psychology › Melanie Klein and the Psychoanalysis of Children 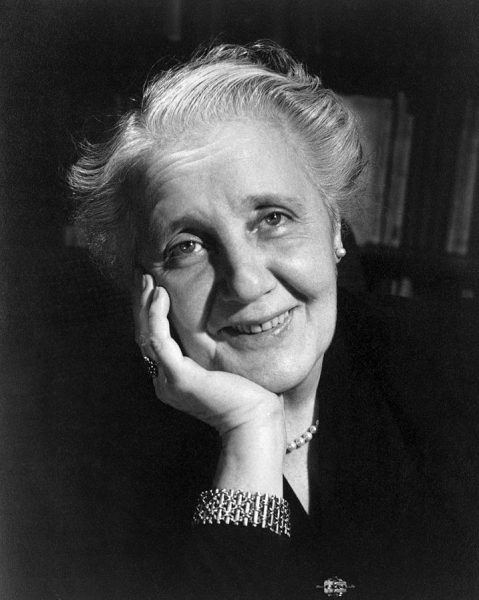 On March 30, 1882, Austrian–British psychoanalyst Melanie Reizes Klein was born. Klein is known for her work with young children, in which observations of free play provided insights into the child‘s unconscious fantasy life, enabling her to psychoanalyze children as young as two or three years of age. She was a leading innovator in object relations theory.

“Feelings of love and gratitude arise directly and spontaneously in the baby in response to the love and care of his mother.”
– Melanie Klein (1937)

Melanie Klein was born the youngest of four children of Moritz and Libussa Reizes. Her father was a doctor and came from an Orthodox Jewish family in Lviv, her mother came from what is now Slovakia. Melanie originally wanted to study medicine, but did not pursue this goal after becoming engaged to Arthur Klein in 1899. They married in 1903, shortly after their daughter Melitta was born. Their son Hans followed in 1907. Melanie Klein was already depressed during her pregnancy and afterwards. Her son Erich was born in 1914. During this time she began her psychoanalysis tuition with Sandor Ferenczi in Budapest. She was intensively occupied with the newly developing psychoanalysis and began to analyse her youngest son in response to Ferenczi’s encouragement, although she had no formal training at all. In 1921, Klein moved to Berlin studying with the German psychoanalyst, and a collaborator of Sigmund Freud,[6,7] Karl Abraham. Despite the support by Abraham, Klein was never really able to increase her influence in Berlin.

When the British psychoanalyst Ernest Jones contacted Melanie Klein, impressed by her pioneering work with children, Klein moved to London and remained there for the rest of her life. However, when Sigmund and Anna Freud arrived in London in 1938, Melanie Klein‘s theories came into conflict with those of Continental analysts who were migrating to Britain. Following the debated between their followers, the British Psychoanalytical Society split into three separate training divisions: (1) Kleinian, (2) Anna Freudian, and (3) independent.

Melanie Klein was one of the first psychoanalysists to work with younger children. She innovated several techniques like the integration of toys when working with children and developed theories on infant development. She assumed that children express their inner conflicts in the game, and that it is possible for the analyst to explore and interpret these conflicts by observing the game. Klein also established a training program in psychoanalysis and became known as one of the co-founders of object relations theory. She managed to extend Sigmund Freud’s understanding of the unconscious mind. Klein analyzed children‘s play and explored the mind of infants, for instance, finding an early Oedipus complex and the earliest roots of the superego. Melanie Klein was able to make significant theoretical contributions to psychoanalysis, most notably the ‘paranoid-schizoid position’ and the ‘depressive position‘. She further showed how these primitive mental states impact on the adult.

While Freud’s psychoanalysis placed a strong emphasis on the concept of instincts and thus understood the human being primarily as an individual, Melanie Klein increasingly drew attention to early childhood developments and mother-child interaction. She argued that the way a person perceives the world and the expectations with which they approach it are shaped by their relationships to important early reference persons (“objects”). These objects can be loved or hated. Here Klein believed to have remained true to the Freudian driving concept of libido and death instinct. Freud, on the other hand, saw her as a deviationist.

At yovisto academic video search, you can learn more about ‘What positive psychology can help you become‘ in a talk by Martin Seligman