You are here: Home › physics › Heinrich Hertz and the Successful Transmission of Electromagnetic Waves 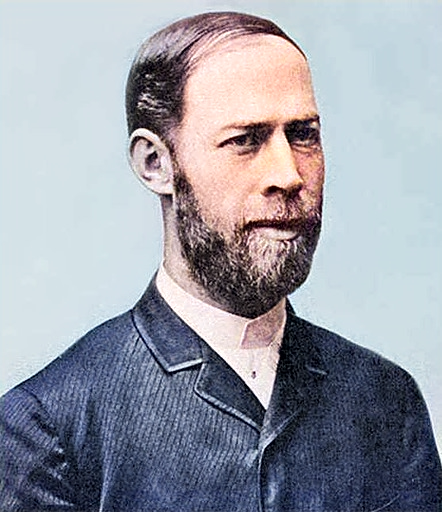 “The rigour of science requires that we distinguish well the undraped figure of Nature itself from the gay-coloured vesture with which we clothe her at our pleasure.”
— Heinrich Hertz, as quoted by Ludwig Boltzmann in a letter to Nature (28 February 1895)

Heinrich Rudolf Hertz came from a distinguished Hanseatic family. His father Gustav Ferdinand Hertz (original name David Gustav Hertz, 1827-1914) came from a Jewish family, but converted to Christianity. He had a doctorate in law, was a judge since 1877 and from 1887 to 1904 senator and president of the Hamburg administration of justice. The mother Anna Elisabeth née Pfefferkorn was the daughter of a garrison doctor. Hertz graduated from high school at the Johanneum in Hamburg and then prepared himself for engineering studies in a design office in Frankfurt am Main. He broke off his studies in Dresden after the first semester because he was only enthusiastic about the mathematics lectures there. After one year of military service, he began to study mathematics and physics at the Technical University of Munich.

In 1878 he moved to the Friedrich-Wilhelms-Universität in Berlin. He received his doctorate at the age of 23 with a thesis on the rotation of metal spheres in a magnetic field and remained with Hermann von Helmholtz in Berlin for two years as a research and lecture assistant.[5] In 1883 Hertz became a private lecturer in theoretical physics at the Christian-Albrechts-Universität zu Kiel. From 1885 to 1889 he taught as a professor of physics at the Technical University of Karlsruhe.

The Transmission of Radio Waves

In Karlsruhe, Hertz experimented with Riess spirals and he noticed that discharging a Leyden jar [6] into one of these coils would produce a spark in the other coil. The scientist came up with an idea to build an apparatus and intended to prove Maxwell’s theory. Hertz used a Ruhmkorff coil-driven spark gap and one-meter wire pair as a radiator. Capacity spheres were present at the ends for circuit resonance adjustments. His receiver was a simple half-wave dipole antenna with a micrometer spark gap between the elements. This experiment produced and received what are now called radio waves in the very high frequency range.

The first spark gap oscillator built by Heinrich Hertz around 1886

The scientist proceeded to conduct a series of experiments between 1886 and 1889, which would prove the effects he was observing were results of Maxwell’s predicted electromagnetic waves. He further discussed his results in his paper On Electromagnetic Effects Produced by Electrical Disturbances in Insulators. Heinrich Hertz sent a series of papers to Helmholtz at the Berlin Academy, including papers in 1888 that showed transverse free space electromagnetic waves traveling at a finite speed over a distance. In his device, the electric and magnetic fields would radiate away from the wires as transverse waves. Hertz had positioned the oscillator about 12 meters from a zinc reflecting plate to produce standing waves. Each wave was about 4 meters long. Using the ring detector, he recorded how the wave’s magnitude and component direction varied. Hertz measured Maxwell’s waves and demonstrated that the velocity of these waves was equal to the velocity of light. He further measured the the electric field intensity, polarity and reflection of the waves. These experiments established that light and these waves were both a form of electromagnetic radiation obeying the Maxwell equations.

The external photoelectric effect discovered by Alexandre Edmond Becquerel in 1839 was also studied by Hertz in 1886. One year later, this investigation was continued by his assistant Wilhelm Hallwachs (Hallwachs effect). The effect played a special role in Albert Einstein‘s formulation of the light quantum hypothesis in 1905.

Heinrich Hertz’s proof of the existence of airborne electromagnetic waves led to an explosion of experimentation with this new form of electromagnetic radiation, which was called “Hertzian waves” until around 1910 when the term “radio waves” became current.  Researchers like Oliver Lodge, Ferdinand Braun, and Guglielmo Marconi employed radio waves in the first wireless telegraphy radio communication systems, leading to radio broadcasting, and later television.

From 1889 he was professor of physics at the Rheinische Friedrich-Wilhelms-Universität Bonn, after rejecting appointments to Berlin, Giessen and America. In 1892 Hertz was diagnosed with Wegener’s granulomatosis after a severe migraine attack, in 1894 he died of it in Bonn.