You are here: Home › physics › Victor Franz Hess and the Cosmic Radiation 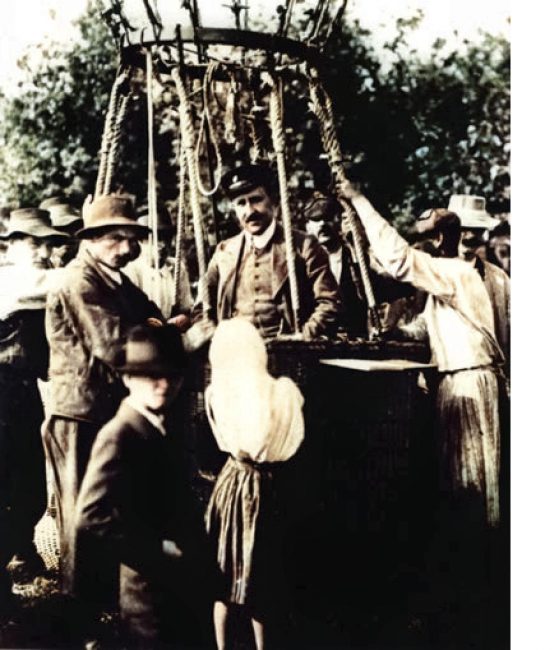 Hess back from his balloon flight in August 1912

On August 7, 1912, Austrian physicist Victor Franz Hess provided evidence of a high-altitude radiation in one of his balloon rides, which later was called cosmic radiation. Together with Carl Anderson, he received the 1936 Nobel Prize in Physics for the discovery of cosmic radiation.

What causes Ionization of the Air?

Victor Franz Hess was educated in Graz, Austria. There, he attended the grammar school and the University of Graz. At the Physical Institute in Vienna, Hess worked in the field of radioactivity and was supported by Professor von Schweidler. He was active at the Institute of Radium Research of the Viennese Academy of Sciences between 1910 and 1920 and was appointed Extraordinary Professor of Experimental Physics at the Graz University after his discovery of the cosmic radiation [1]. After the discovery of radioactivity by Henri Becquerel [9] in 1896, it was generally believed that atmospheric electricity, ionization of the air, was caused only by radiation from radioactive elements in the ground or the radioactive gases or isotopes of radon they produce. Measurements of ionization rates at increasing heights above the ground during the decade from  showed a decrease that could be explained as due to absorption of the ionizing radiation by the intervening air. Back then, scientists wondered, why the air in electroscopes-instruments for detecting electrical charges became electrically charged no matter how well the containers were insulated. First, they believed that radioactivity from ground minerals was responsible, but then, the effect would have diminished at a height of about 300 meters. It was the German physicist Theodor Wulf, who measured around 1910 ionization at the bottom of the Eiffel Tower and a remarkably higher ionization at the top. Hess then speculated that the source of ionization could be located in the sky rather than the ground [2].

First, Hess determined 500m as the possible height at which ground radiation would stop producing ionization and started designing instruments that could not be damaged by temperature and pressure changes. The scientist then made ten ascents in a balloon between 1911 and 1913. He found out that ionization soon ceased to fall off with height and began to increase rapidly. At a height of several miles, the ionization was a few times greater than at the earth’s surface. He concluded, therefore, that “a radiation of very high penetrating power enters our atmosphere from above“. On April 12, 1912, Hess made an ascent during an almost total eclipse of the sun and he concluded that since ionization did not decrease during the eclipse, the sun could not itself be the main source of the radiation. Hess’s theory about rays from space did not receive general acceptance at the time he proposed it. However, his findings were supported by Robert Andrews Millikan [7] in 1925, who also named the phenomenon “cosmic rays“. From there, further research topics on particle and nuclear physics were established. Carl David Anderson [5] discovered the positron and muon in cosmic rays and received the Nobel Prize in physics, along with Victor Franz Hess in 1936 [2].

In the 1920s, the term cosmic rays was coined by Robert Millikan who made measurements of ionization due to cosmic rays from deep under water to high altitudes and around the globe. Millikan believed that his measurements proved that the primary cosmic rays were gamma rays; i.e., energetic photons. And he proposed a theory that they were produced in interstellar space as by-products of the fusion of hydrogen atoms into the heavier elements, and that secondary electrons were produced in the atmosphere by Compton scattering of gamma rays. But then, sailing from Java to the Netherlands in 1927, Jacob Clay found evidence, later confirmed in many experiments, of a variation of cosmic ray intensity with latitude, which indicated that the primary cosmic rays are deflected by the geomagnetic field and must therefore be charged particles, not photons.