You are here: Home › mathematics › What is a Mathematical Function – according to Johann Bernoulli 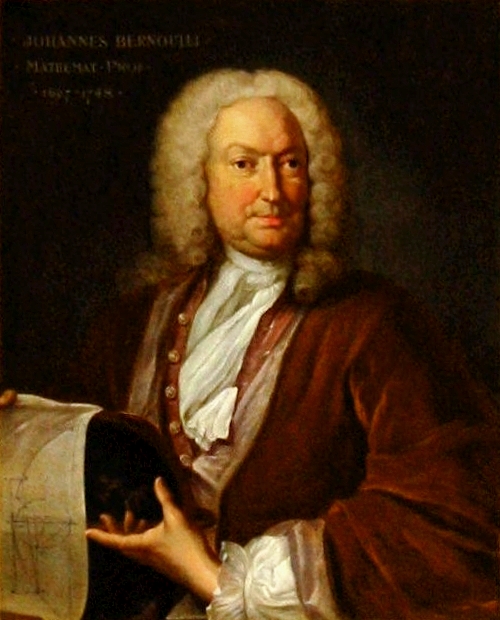 On August 6, 1667, Swiss mathematician Johann Bernoulli was born. He was one of the many prominent mathematicians in the Bernoulli family. He is known for his contributions to infinitesimal calculus and educating Leonhard Euler in the pupil’s youth.[1]

“I recognize the lion by his claw.”
– Johann Bernoulli, after reading an anonymous solution to a problem that he realized was Newton’s solution.[10]

Johann Bernoulli and the Early Days of Calculus

Johann I Bernoulli was the tenth child of Niklaus Bernoulli of the Bernoulli family, a member of the city council of Basel, and was originally intended to become a merchant. Instead, he studied at the University of Basel from 1683, where he received his master’s degree in 1685. He then studied medicine. His older brother Jakob [2] introduced him to mathematics and especially to the then new field of analysis. In 1690 he solved the problem of the chain line posed by his brother Jakob. In the same year he travelled to Geneva and one year later to Paris. Everywhere he spread the knowledge of the new mathematical discipline of differential calculus, in Paris he passed it on to the Marquis de l’Hôpital, who published the first textbook on calculus Analyse des Infiniment Petits pour l’Intelligence des Lignes Courbes (“Infinitesimal calculus with applications to curved lines”) in 1696 after having been taught calculus by Johann.

This was the first textbook on infinitesimal calculus and it presented the ideas of differential calculus and their applications to differential geometry of curves in a lucid form and with numerous figures. Contrary to what is commonly said these days, de l’Hôpital was a fine mathematician, perhaps the best mathematician in Paris at that time, although he was not quite in the same class as Johann Bernoulli.[9] As one would expect, it upset Johann Bernoulli greatly that this work did not acknowledge the fact that it was based on his lectures. The preface of the book contains only the statement:

“And then I am obliged to the gentlemen Bernoulli for their many bright ideas; particularly to the younger Mr Bernoulli who is now a professor in Groningen.”[9]

In 1694 Bernoulli received his doctorate in medicine in Basel. From 1693 onwards, he began his extensive correspondence with Leibniz, with whom, among other things, he conducted a controversy in 1712 about the values of the logarithm for negative values of the argument. In 1695 he became a professor in Groningen (in which his brother Jacob, with whom he was in dispute from about 1697, was not entirely uninvolved). In 1705, after the death of his brother from tuberculosis, he became his successor as professor of mathematics in Basel. After Leibniz‘s death in 1716,[3] he was the main representative of differential calculus in continental Europe. In the Newton-Leibniz controversy,[4] he strongly supported Leibniz and added weight to the argument by showing the power of his calculus in solving certain problems which Newton had failed to solve with his methods. Although Bernoulli was essentially correct in his support of the superior calculus methods of Leibniz, he also supported Descartes‘ vortex theory over Newton’s theory of gravitation and here he was certainly incorrect. He had another feud with Brook Taylor.[6] 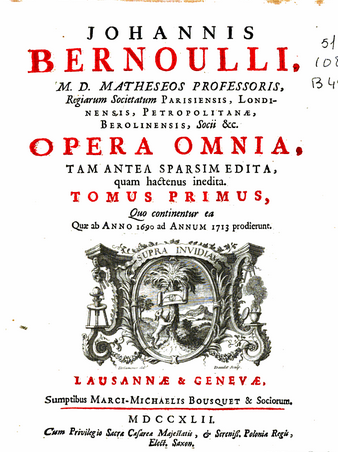 The Modern Concept of Mathematical Function

His areas of work included series, differential equations, curves under geometrical and mechanical aspects. He was instrumental in the development of the modern concept of function and played an important role in the early days of the calculus of variations. Leibniz (1646 to 1716) used the word function for the first time in 1692 to designate lengths that depend on a point on a curve that is thought to be movable. Johann Bernoulli provided the first definition, and Leonhard Euler (1707 to 1783), Fourier (1768 to 1830) and Dirichlet (1805 to 1859) subsequently contributed significantly to the further development and specification of the term function. In mathematics, a function f is an unambiguous assignment that uniquely assigns an element y from a set W to each element x from a set D. D is the domain, W the range of the function f.

Among other things, Bernoulli solved the problem of brachistochrons (posed by Jakob Bernoulli in 1696) and published his solution in 1708. In 1717, Johann I Bernoulli gave the general formula of the principle of virtual work for rigid bodies in a letter to Pierre de Varignon. He also dealt with hydraulics, although he claimed results of his son Daniel Bernoulli for himself.

In 1724, Johann Bernoulli entered a competition sponsored by the French Académie Royale des Sciences, which posed the question:

What are the laws according to which a perfectly hard body, put into motion, moves another body of the same nature either at rest or in motion, and which it encounters either in a vacuum or in a plenum?

In defending a view previously espoused by Leibniz, he found himself postulating an infinite external force required to make the body elastic by overcoming the infinite internal force making the body hard. In consequence, he was disqualified for the prize, which was won by Maclaurin. However, Bernoulli’s paper was subsequently accepted in 1726 when the Académie considered papers regarding elastic bodies, for which the prize was awarded to Pierre Mazière. Bernoulli received an honourable mention in both competitions.

Although Johann and his brother Jacob Bernoulli worked together before Johann graduated from Basel University, shortly after this, the two developed a jealous and competitive relationship. Johann was jealous of Jacob’s position and the two often attempted to outdo each other. After Jacob’s death Johann’s jealousy shifted toward his own talented son, Daniel.[6] Bernoulli also made important contributions to mechanics with his work on kinetic energy, which, not surprisingly, was another topic on which mathematicians argued over for many years. His work Hydraulica is another sign of his jealous nature. The work is dated 1732 but this is incorrect and was an attempt by Johann to obtain priority over his own son Daniel, who completed his most important work Hydrodynamica in 1734 and published it in 1738 at about the same time as Johann published Hydraulica. This was not an isolated incident, and as he had competed with his brother, he now competed with his own son.

Johann Bernoulli attained great fame in his lifetime. He was elected a fellow of the academies of Paris, Berlin, London, St Petersburg and Bologna. He was known as the “Archimedes of his age” and this is indeed inscribed on his tombstone.

The Bernoullis: When Math is the Family Business [12]