You are here: Home › physics › Carl David Anderson and the Discovery of the Positron 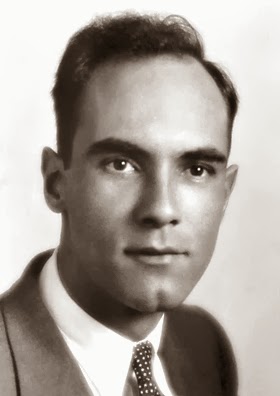 On January 11, 1991, American physicist Carl David Anderson passed away. He is best known for his discovery of the positron in 1932, an achievement for which he received the 1936 Nobel Prize in Physics, and of the muon in 1936.

“The atom can’t be seen, yet its existence can be proved. And it is simple to prove that it can’t ever be seen. It has to be studied by indirect evidence — and the technical difficulty has been compared to asking a man who has never seen a piano to describe a piano from the sound it would make falling downstairs in the dark.”
– Card David Anderson, as quoted in [10]

Carl D. Anderson was born on September 3, 1905, in New York City as the son of Swedish immigrants. He studied physics and engineering at Caltech in Pasadena, California, where he received his B.S. in 1927, and continued for a Ph.D. in 1930 under the supervision of Robert A. Millikan,[6] a famous Nobel Laureate, who had received the Nobel Prize for Physics in 1923 for his measurement of the elementary electronic charge and for his work on the photoelectric effect. Anderson began investigations into gamma rays and cosmic rays during the course of which he encountered unexpected particle tracks in his (modern versions now commonly referred to as an Anderson) cloud chamber photographs. His cloud chamber was a magnet surrounded apparatus, causing atomic particles to bend in different directions based on their electric charge. Anderson found a number of tracks whose orientation suggested that they were caused by positively charged particles — but particles too small to be protons. After nearly a year of effort and observation, he decided the tracks were actually antielectrons, particles with the same mass as the electron, but with opposite electrical charge, each produced alongside an electron from the impact of cosmic rays in the cloud chamber.

In 1928, Paul Dirac published a scientific paper proposing that electrons can have both a positive charge and negative energy.[5] This paper introduced the Dirac equation, a unification of quantum mechanics, special relativity, and the then-new concept of electron spin. Although, the paper did not explicitly predict a new particle, but did allow for electrons having either positive or negative energy as solutions. Anderson was not the first to observe the newly detected positive charged particle, but he provided the correct interpretation. Already in 1929, Dmitri Skobeltsyn had observed the particle while using a cloud chamber to try to detect gamma radiation in cosmic rays, Skobeltsyn detected particles that acted like electrons but curved in the opposite direction in an applied magnetic field. Likewise, in 1929 Chung-Yao Chao, a graduate student at Caltech, noticed some anomalous results that indicated particles behaving like electrons, but with a positive charge, though the results were inconclusive and the phenomenon was not further pursued. 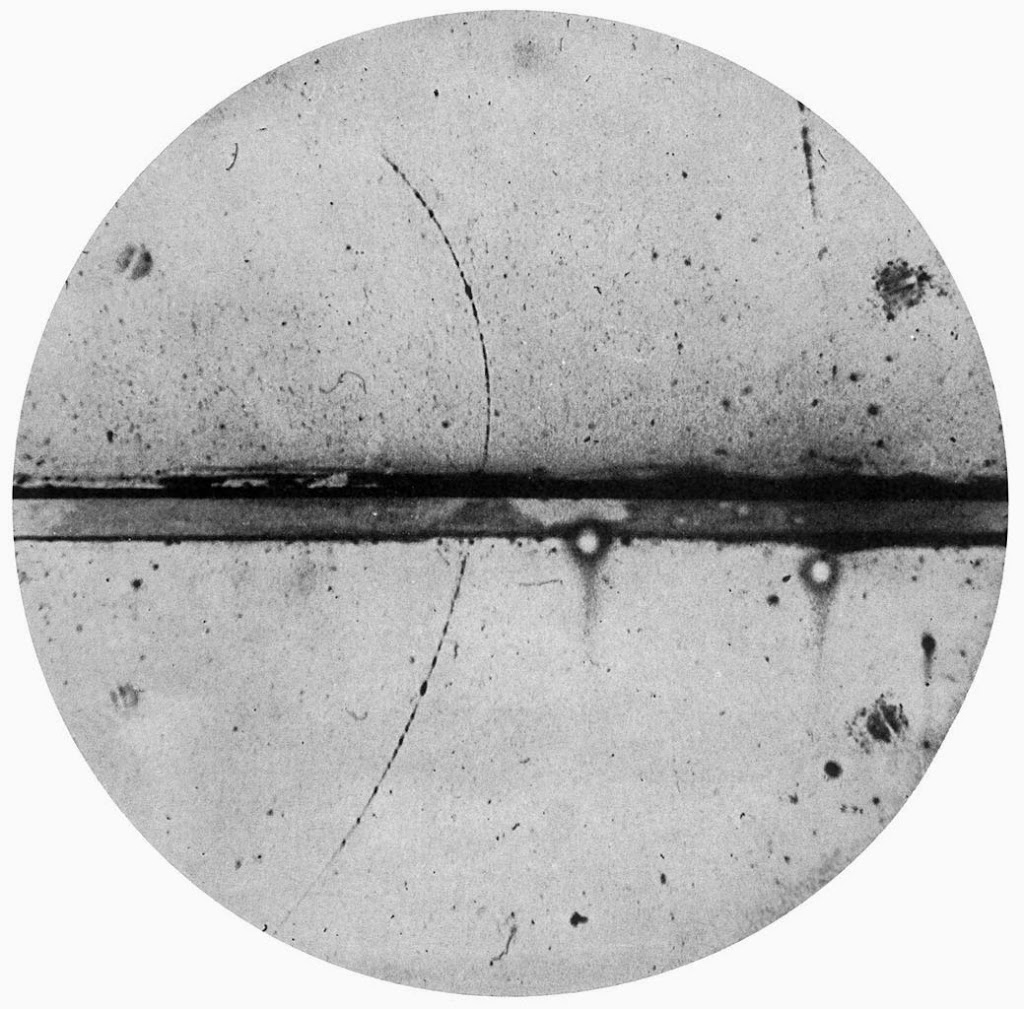 Photo by Carl David Anderson of the first positron ever observed,
photographed on August 2, 1932

Anderson announced his discovery of a positively charged particle with the mass of an electron on August 2, 1932, which soon after was confirmed by soon after by Italian physicist Giuseppe Occhialini and later Nobel Laureate Patrick Blackett at Cavendish Laboratory in Cambridge in 1934. Anderson’s discovery was able to validate Paul Dirac’s theoretical prediction of the existence of the antielectron, also referred to as positron. While Anderson first detected the particles in cosmic rays, he later produced more conclusive proof together with his graduate student Seth Neddermeyer by shooting high energetic gamma rays into other solid materials, resulting in the creation of positron-electron pairs. This was the very first example of the existence of antimatter. For this work, Anderson shared the 1936 Nobel Prize in Physics with Victor Franz Hess,[7] whose work in 1912 led to the discovery of cosmic radiation. For years to come, cosmic rays remained the only source of high-energy particles. The next antiparticle physicists were looking for was the antiproton. Much heavier than the positron, the antiproton is the antipartner of the proton. It would not be confirmed experimentally for another 22 years.

Also in 1936, Anderson and Neddermeyer discovered the muon (or ‘mu-meson’), a subatomic particle 207 times more massive than the electron, but with the same negative electric charge and spin 1/2 as the electron, again in cosmic rays.  The muon was the first of a long list of subatomic particles whose discovery initially baffled theoreticians who could not make the confusing “zoo” fit into some tidy conceptual scheme. Willis Lamb, in his 1955 Nobel Prize Lecture, joked that he had heard it said that “the finder of a new elementary particle used to be rewarded by a Nobel Prize, but such a discovery now ought to be punished by a 10,000 dollar fine.“

Carl David Anderson spent all of his academic and research career at Caltech. He died on January 11, 1991, at age 85.