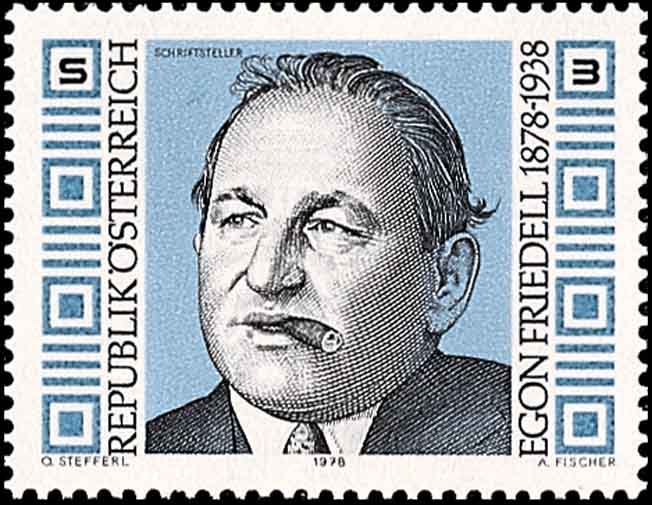 On 16 March 1938, at about 22:00, two SA men arrived at the house of prominent Austrian philosopher, historian, journalist and critic Egon Friedell to arrest him. While they were still arguing with his housekeeper, Friedell committed suicide by jumping out of the window. Before leaping, he warned pedestrians walking on the sideway where he hit by shouting “Watch out! Get out of the way!“. This was the tragic end of a brilliant mind.

“The worst prejudice we acquire during our youth is the idea that life is serious. Children have the right instincts: they know that life is not serious, and treat it as a game… “(Egon Friedell, in Karl Kraus ‘Die Fackel’, 1905)

Egon Friedell was born on April 9, 1878 as the third child of a Jewish silk manufacturer, Moriz Friedmann, and his wife, Karoline. After his parents divorced in 1887, Friedell lived with his father. After his father’s death in 1891, Friedell lived with his aunt in Frankfurt am Main, where he would attend school, until he was expelled for unruly behaviour two years later. Even at this young age, Friedell was considered a trouble maker and free thinker. The enfant terrible attended several schools in Austria and Germany, until he finally passed his Abitur after four attempts, in Bad Hersfeld, Germany in 1899. Already in 1897 prior to his graduation, Friedell enrolled as a guest student at the University of Berlin for Germanistik, natural sciences and philosophy. At the same time he renounced judaism and converted to the Evangelical-Lutheran faith.

“A world without God is not only the most immoral, but also the most uncomfortable that can be imagined.”
Egon Friedell, about atheism in: Cultural History of the Modern Era. Munich: Beck, 1969. p. 940

After his graduation, Friedell enrolled in Heidelberg University to study under the philosophy historian and follower of Hegel, Kuno Fischer. In 1899, he accepted his inheritance enabling him to live financially independently in Vienna. From 1900 to 1904, Egon Friedell studied German literature and philosophy in Vienna and finished his doctorate in 1904 with his dissertation on ‘Novalis als Philosoph‘. This enabled him to take over the artistic management of the Vienna cabaret “Fledermaus“, named after the famous Johann Strauss operetta, which lasted from 1905 to 1910. During this time, Friedell published essays and one-act plays. His first literary effort was The Paraffin King. The sketch comedy Goethe (written together with Alfred Polgar) in which he also played the leading role, made him famous in German speaking countries.

In 1910, Friedell was commissioned by publisher Samuel Fischer to write a biography of poet Peter Altenberg. Fischer, who had expected something light, was unsatisfied with Friedell’s deep theoretical analysis and critique of culture titled Ecce poeta. Although a commercial failure, the book served to mark the beginning of Friedell’s interest in cultural history. In 1913 Egon Friedell worked for as an actor for famous director, Max Reinhardt in Berlin. In 1914, suffering from alcoholism and obesity, Friedell was forced to undergo treatment at a sanatorium near Munich. Then World War I began and as most of his contemporaries, Friedell was enthusiastic and volunteered for military service but was rejected for physical reasons.

The Cultural History of the Modern Age

In 1924, while working as a critic for the journal Stunde, Friedell was fired as a “traitor”, for making satirical remarks. Friedell was a prominent public figure in Vienna, whose unconventionality, biting comments and wit delighted theatregoers and readers. Already in the early 1920s, Friedell wrote the three volumes of his Cultural History of the Modern Age (Kulturgeschichte der Neuzeit), which describes events from the Renaissance to the age of imperialism in an anecdotal format. This entertaining and utterly unacademic work rejects the author’s idiosyncratic views on European history and is notable for its brilliant prose style. Friedell writes :

“All the classifications man has ever devised are arbitrary, artificial, and false, but simple reflection also shows that such classifications are useful, indispensable, and above all unavoidable since they accord with an innate aspect of our thinking”
– Egon Friedell,  Cultural History of the Modern Age (1927)

When publisher Hermann Ullstein received the first volume in 1925, he was suspicious of the historiography of an actor and rejected the publication. Five other publishers subsequently rejected the book and it was finally published by Heinrich Beck in Munich in 1927. The book proved very successful and allowed Friedell to continue his work as an author and has been translated into seven languages. Although being an actor, this work earned him a place in the pantheon of historians. After 1927, health problems prevented any permanent commissions, and he worked as an independent essayist, editor and translator in Vienna.

In 1937, Friedell’s works were banned by the National Socialist regime as they did not conform to the theory of history promoted by the NSDAP. Thus, all German and Austrian publishers refused to publish his works. The first volume of Friedell’s A Cultural History of Antiquity, which he failed to complete, was published by Helikon in Zurich. When the Nazis invaded Austria in March 1938 and the country was incorporated into Hitler’s Reich, anti-semitism was rampant, Jewish men and women were being beaten in the streets and their businesses and synagogues ransacked or destroyed. On 16 March 1938, at about 22:00, two SA storm troopers arrived at Friedell’s house to arrest him. While they were still arguing with his housekeeper, Friedell committed suicide by jumping out of the window. Before leaping, he warned pedestrians walking on the sideway where he hit by shouting “Watch out! Get out of the way!“.

“The bioscope is killing human gesticulation, as sound film is killing the human voice – and the same is true of the radio; at the sometime, it is freeing us of the necessity of concentration, and we are now able to enjoy Mozart and sauerkraut, or the Sunday sermon and a game of cards, at one and the same time.” (from A Cultural History of the Modern Age, vol. 3, 1931) 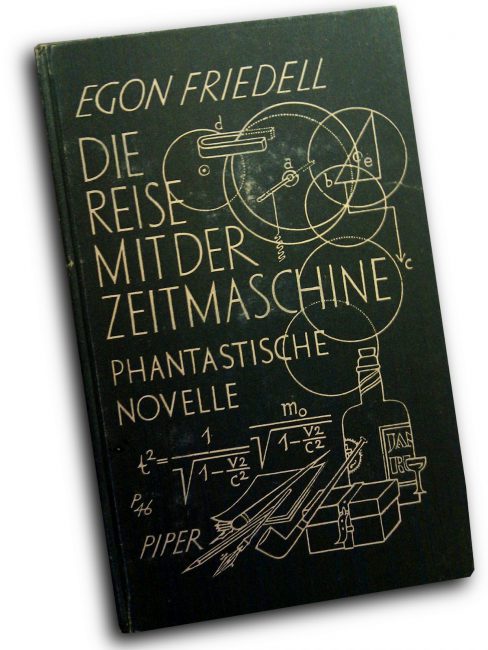 Egon Friedell also wrote novels, and one of the was ‘The Return of the Time Machine‘, where Friedell carries on the famous science fiction story of H. G. Wells ‘The Time Machine‘.[4] T