You are here: Home › physics › Paul Dirac and the Quantum Mechanics 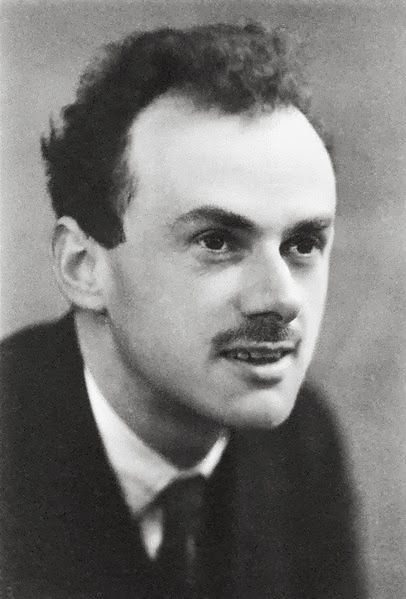 On August 8, 1902, English theoretical physicist Paul Adrien Maurice Dirac was born. Dirac is best known for his fundamental contributions to the early development of both quantum mechanics and quantum electrodynamics.

“The aim of science is to make difficult things understandable in a simpler way; the aim of poetry is to state simple things in an incomprehensible way. The two are incompatible.”
— Paul Dirac

Paul Dirac was born in Bristol, Gloucestershire, England. His father Charles Dirac was Swiss with roots in the French-speaking Saint-Maurice in Valais; he taught French at Dirac’s school in Bristol. His mother, Florence Holten, was the daughter of a sailor from Cornwall. His childhood was unhappy as a result of his father’s strict and authoritarian behavior – his brother Felix took his own life in March 1925. Dirac attended a technical college, which was attached to the University of Bristol. Dirac first studied electrical engineering at Bristol in 1921, then switched to mathematics and in 1923 was awarded a scholarship to Cambridge University, where he studied under Ralph Howard Fowler. In 1926 he graduated with a dissertation on quantum mechanics. From 1932 to 1969 Dirac was professor of the Lucasian Chair of Mathematics at Cambridge University. In 1934 he was a visiting professor at the newly founded Institute for Advanced Study (in Princeton, New Jersey, but separate from the university).

During his research years, Paul Dirac managed to develop a general theory of quantum field theories with dynamical constraints and he was able to quantize the gravitational field. Today, these achievements take a great part in forming the foundations of superstring theories. In 1925, he began his early research work in quantum physics after being invited to read Werner Heisenberg‘s paper on the improvements of Bohr’s and Sommerfeld‘s old quantum theory.[4,5] Reading Heisenberg’s work inspired Dirac, who noticed significant connections to classical dynamics. The line, Dirac was able to draw between these fields caused him to earn a Ph.D. from Cambridge after publishing his results in 1926. Following this inspiration furtherly, Dirac was later able to formulate a large part of the existing theories in quantum mechanics.

Paul Dirac proposed his famous Dirac Equation in 1928 building on the foundation of 2×2 matrices. This work depicted a relativistic equation of motion for the wavefunction of the electron. Building on this work, he managed to predict the existence of the positron, which was observed by Carl Anderson in 1932.[6] In the following years, Dirac also became known as the founder of quantum electrodynamics and he was the first to publish his ideas on vacuum polarization. His works on quantum mechanics highly influences further generations of scientists like Richard Feynman, Julian Schwinger or Freeman Dyson. Especially in 1930, his publication on the Principles of Quantum Mechanics depicted a turning point in physics and is still used in form of textbooks on this day. In it, he combined works of Heisenberg and Schrödinger into simpler and fewer mathematical formulas.[7]

“Just by studying mathematics we can hope to make a guess at the kind of mathematics that will come into the physics of the future.”
— Paul Dirac, “The Evolution of the Physicist’s Picture of Nature” in Scientific American (May 1963)

Dirac created the term boson in recognition of Satyendra Nath Bose‘s merits in quantum statistics.[8] Together with Enrico Fermi, he is considered the inventor of fermion statistics (Fermi-Dirac statistics), but recognized Fermi’s priority. 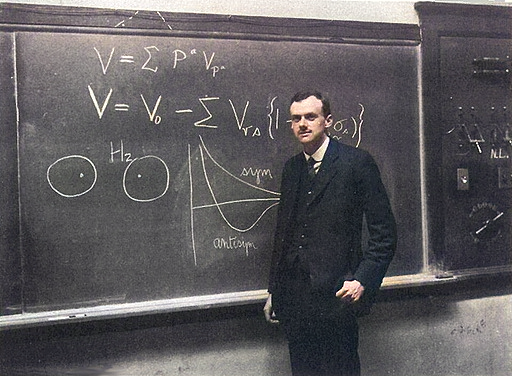 Paul Dirac at the Blackboard

The list of Paul Dirac’s achievements goes on and on and his influences in the world of physics are numerous. In the eyes of his colleagues, Dirac was a focused and precise working scientists, who disliked when his befriended scientists showed interest in dancing or poetry, like Oppenheimer or Heisenberg did. In 1933 Dirac and Erwin Schrödinger were awarded the Nobel Prize in Physics “for the discovery of a new, useful form of atomic theory”. In 1930 he was elected a Fellow of the Royal Society, which awarded him the Royal Medal in 1939 and the Copley Medal in 1952. In 1938 he was elected to the American Philosophical Society, in 1949 to the National Academy of Sciences and in 1950 to the American Academy of Arts and Sciences. In 1952 he was awarded the Max Planck Medal. In 1958 he was accepted into the Accademia Nazionale dei Lincei in Rome; in the same year he was also elected a member of the Leopoldina.